Action Figure Review: Roboto from Masters of the Universe Origins by Mattel 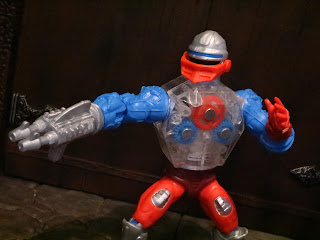 It's time for another review from the third series of Masters of the Universe Origins figures and today we're checking out Roboto. I was pretty excited for Roboto as while he's a very memorable figure from the vintage line he's one of those characters who usually only shows up once per toyline and doesn't often get made by licensees. In my review of Mer-Man last week I commented that Mer-Man (and the rest of series 3) were 2020 releases. As I thought about it, that's actually not quite true. MOTU Origins was exclusive to Walmart in 2020 and Walmart did get some of their allotments of series 3 without the "New for 2021" logo at the top while my order from BBTS and other releases have the "New for 2021" logo. So, yeah, this guy is technically a 2021 release but there is a 2020 release as well. As far as I know they're the same figure with a packaging variant. Anyways, just one of those things maybe worth recording for in the future if we're arguing what year these guys came out. So, Roboto huh? He's bright, he's robotic, and his Masters of the Universe Classics figure was problematic due cracks appearing in the translucent plastic of his torso and his reversed shoulders (one of the first known cases of the infamous reversed shoulders if I remember right). Did Mattel come back and knock this guy out of the park to make up for that past craziness? Eh, not really. This guy has some weird issues, too. Let's check him out after the break... 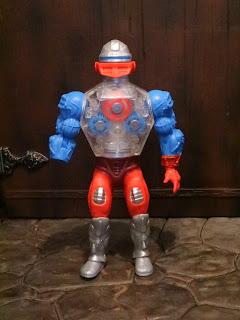 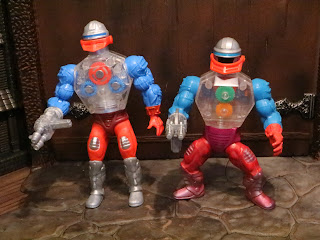 Comparison:
* The new MOTU origins Roboto is on the left while the vintage MOTU Roboto is on the right. These guys look pretty similar with the biggest difference being the proportions and the gear details in the chest. Yeah, the vintage figure originally had silver legs but on almost every figure I see the paint has changed to maroon over time. Roboto is rusting, I guess. 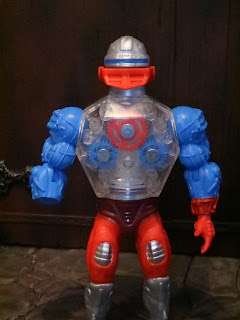 The Positives:
* Roboto is bright, colorful, and rather friendly looking. He stands out even among Eternia's colorful denizens due to his bold red and blue and his unique look. I've always liked MOTU's interjection of technology into a barbarian fantasy world and Roboto fills an interesting place in the Heroic Warriors roster. His arms are quite detailed with lots of sculpted wires running all the way down his arms. He also has the more armored/ robot like legs that she shares with Trap Jaw (who I haven't acquired yet). 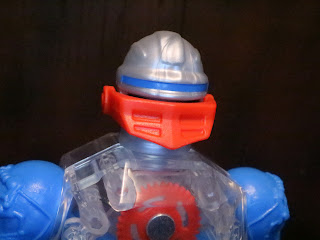 * Roboto's head is very "retro-futuristic" and looks like a robotic version of the helmet of a knight. The blue line seems to be his "eye" while the red jaw covers a black mouth like space that is presumably a speaker of sorts. 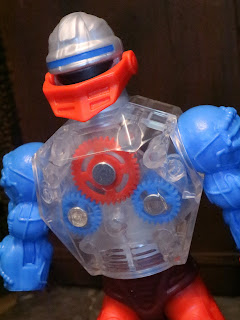 * Mattel did actually implement an actual action feature into this guy and it's very similar to the vintage toy. Turn Roboto's waist and the gears in his chest rotate while his jaw moves up and down. It works quite nicely and it's quite fun to play around with. It's interesting how even in lines with few to no action features (MOTUC and Origns) Mattel has still given Roboto his vintage action feature. 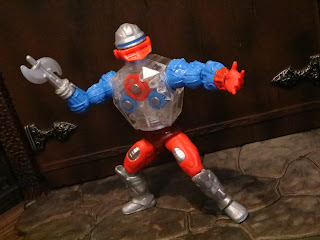 * They're also modular. Like the Masters of the WWE universe figures, these can be easily separated to make your own lazy boy customs! Roboto has no removable head, though, due to his action feature. 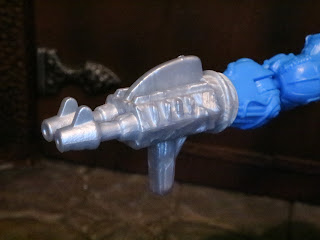 * Like the vintage figure this new Roboto has three interchangeable weapons hands, the first of which us a double barreled laser blaster. How nifty, right? It looks just like the vintage version (the plastic is a bit more silver than grey) and it easily fits into Roboto's right wrist. 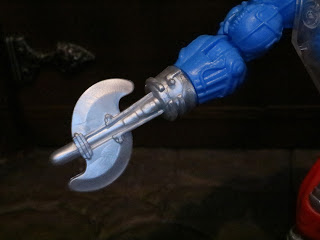 * Next up is Roboto's axe hand. This think is really cool. I just love the idea of Roboto going into battle while swinging this wicked little thing. 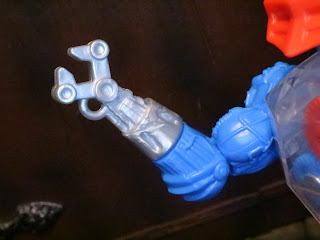 * Last and kind of least is this claw hand. I imagine this is Roboto's standard hand (although the MOTUC version did have a regular robot hand, just like the left hand). 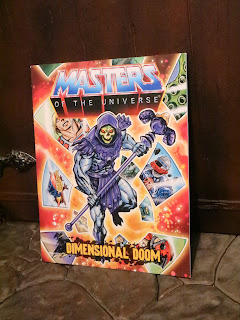 * The series 3 figures all come with the same minicomic: "Dimensional Doom." It's a cool little comic that does feature the series 3 characters and it adds a nice little something to the overall package. 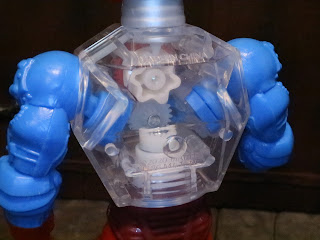 The Negatives:
* Let's talk about Roboto's torso. Not only is it oversized but it's fairly empty. The vintage figure from 35+ years ago had two more gears than this one (a green and orange gear), printed wires and circuits inside, and a red heart which has usually been kind of a significant part of the character. The Origins version only has three gears, no extra wires and such, and no heart. What the heck? Were those toy secrets lost to time or something? 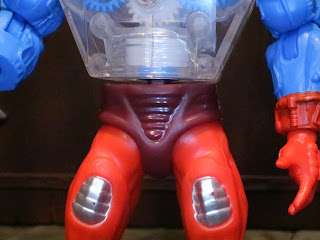 * Robot's torso is so oversized that it doesn't quite fit with the rest of the figure. There's a large gap between his torso and his pelvis that just looks odd and makes the figure super wobbly. It's a bad design element. 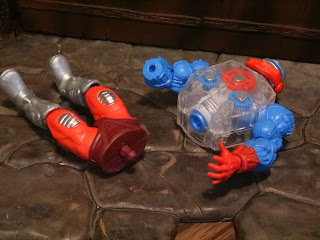 * Robot's torso comes apart pretty easily. I know Mattel wants to reuse parts as much as possible but maybe Robot's crotch should have been a permanently attached part of his torso, like his head, to ensure the action feature worked. This guy is kind of frustrating. 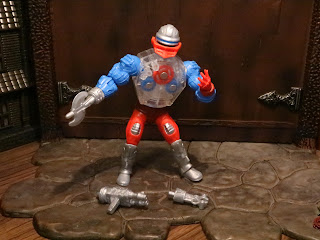 Roboto isn't a horrible figure but he does have a lot of problems. It's fortunately his cool action feature and his interchangeable hands that really save him, too, as the weird oddities like the oversized torso, the loose torso/ waist connection, and the chest cavity that's less intricate than the vintage toy from 1985 make this a disappointing release. He's still a Good figure, but Roboto could have been a knock out in this line. Since he's a robot and since the boot and leg paint is notoriously finicky on the vintage figure this could definitely have been a figure some fans would have liked to have added to their vintage collections. Instead, he's kind of a bottom tier release in this line so far. Bummer!
If you're looking for more of Roboto I've also reviewed the M.U.S.C.L.E. Roboto from Series 3 Pack B, the Super7 Filmation inspired Roboto, and the 200x Roboto head from the MOTUC Heads of Eternia set.
For more Masters of the Universe Origins reviews check out the following:
Battle Cat
Beast Man
Evil-Lyn
He-Man
He-Man and Prince Adam 2-Pack
Lords of Power
Man-At-Arms
Mer-Man
Prince Adam & Sky Sled
She-Ra (PowerCon Exclusive)
Skeletor
Teela