Action Figure Review: Man-At-Arms from Masters of the Universe Origins by Mattel 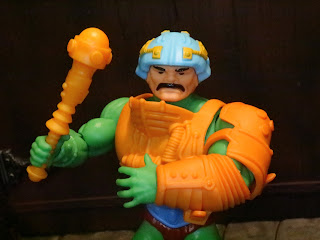 I'm still slowly making my way through the first series of Mattel's Masters of the Universe Origins figures and today I'm checking out Man-At-Arms, the heroic Master of Weapons. Man-At-Arms is almost always one of the first figures to be released in any Masters of the Universe collection so you better believe that Mattel put him out in this first series of MOTU Origins figures. He's He-Man's right hand man! Man-At-Arms is a pretty exacting recreation of the vintage toy with the expected Origins upgrades. The biggest difference is that Mattel opted to give him the mustache he famously sported in the Filmation cartoon series and in nearly every other media depictions since. That's an interesting decision, isn't it? Don't get me wrong: I'm a huge fan of Duncan's stache! It's just odd that a line that seems to be adhering as accurately as possible to the vintage toys and early art would include it. Let's take a look at this version of Man-At-Arms and see what else stands out after the break... 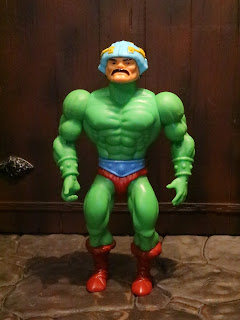 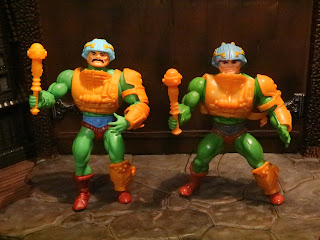 Comparison:
* On the left is the new MOTU Origins Man-At-Arms while the vintage Man-At-Arms is on the right. That's my childhood MAA and you can see that most of the straps holding his chest armor on have snapped over the years. Those were fragile, weren't they? Overall they design is pretty much the same, though the Origins figure has much brighter colors and, of course, the aforementioned mustache. 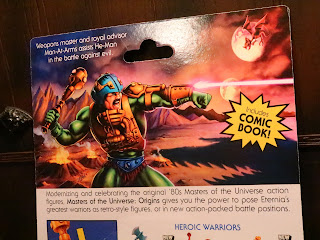 Packaging:
* The back of each package has some very cool character specific art and here is Man-At-Arms' art. The colors are fantastic here, aren't they? 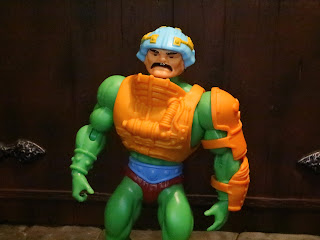 The Positives:
* Man-At-Arms' main feature is his orange battle armor and Mattel did a great job with it. The detail is excellent and looks very crisp. I love the orange and green color scheme here and it looks pretty nice with the brightened color scheme of the Origins release. The armor is also easy to put on and take off as it is more flexible and a bit rubbery. This seems like it's definitely not going to break. 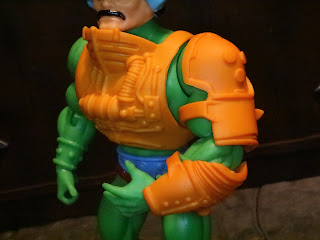 * Man-At-Arms also comes with the armor he wears on his left arm and left leg. Its made from the same flexible plastic and goes on easily. Mattel actually split up the shoulder pad and forearm plate into two separate pieces to allow the elbow articulation to still function as intended. 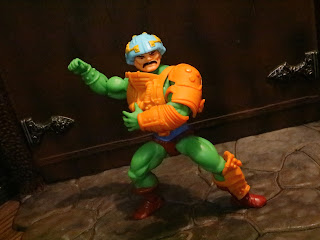 *  The MOTU Origins line figures are built like the vintage toys but with modern articulation. While their bulky frames make the articulation a bit clumsy, they do feel like an evolution of the vintage line. Imagine what you would get if you mixed a vintage figure with a MOTUC figure. They're quite fun to play with.
* They're also modular. Like the Masters of the WWE universe figures, these can be easily separated to make your own simple customs! 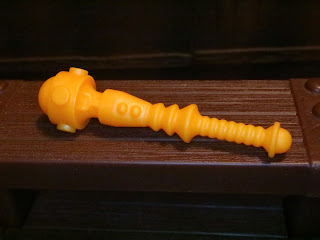 * While the trend over the years has been to make Man-At-Arms' mace larger and larger the mace that comes with this figure is rather small. It's much closer in size and design to the vintage toy that anything we've seen before. While it's still a mace like weapon you have to wonder how much technology is crammed into this thing. It reminds me of Big Barda's Mega-Rod. 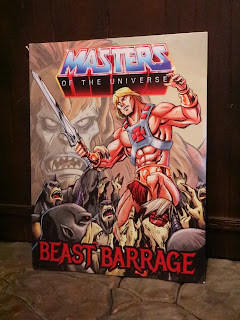 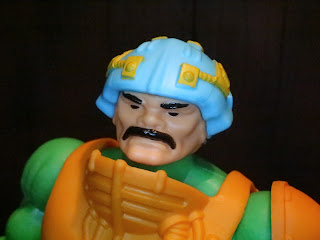 The Negatives:
* I like the inclusion of the mustache but otherwise Man-At-Arms' headsculpt is a disappointment. It looks flat and squished. The proportions just really seem off.
* Also, why aren't MAA's wrist cuffs painted? He-Man's were. MAA's usually showed up as either orange or blue on cross-sell art and other early media and that would have been a nice little improvement. 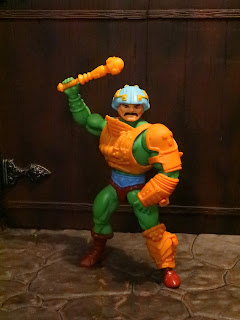 From the neck down Man-At-Arms is a very solid figure in Masters of the Universe Origins but that headsculpt is really just killing my enthusiasm for the figure. If the headsculpt were a bit better and less squashed looking Man-At-Arms would have been another figure in this series that I feel would have surpassed the vintage toy. That being said, this guy is close but not quite there. The armor is a huge improvement, though. I like how much more durable and easier to strap on this armor is versus the armor from the vintage line. Factoring in everything here, I'd give Man-At-Arms a Good and a 1/2. I was expecting him to be one of the strongest figures in the first series of Origins but he's not. He's not bad, but just a bit flawed.