Action Figure Review: He-Man from Masters of the Universe Origins by Mattel 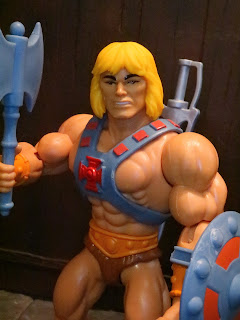 Who's ready for He-Man? While I have the SDCC 2019 Masters of the Universe Origins He-Man from the very cool 2-pack I still wanted to get a basic He-Man from Mattel's new MOTU Origins line. He's a bit different from the previously released figure and, of course, can you really ever have enough He-Man figures? Let's jump in and check out the main man with the fabulous secret powers after the break... 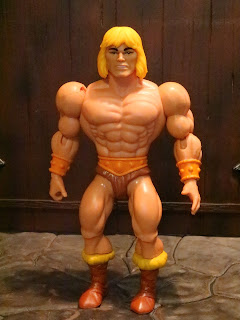 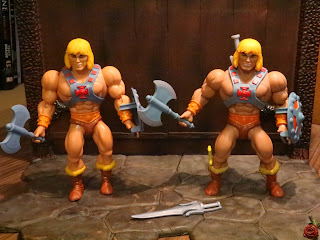 Comparison:
* The standard MOTU Origins that I'm checking out today is on the left while the SDCC 2019 He-Man is on the right. They're the same figure but the standard Origins He-Man has shinier skin, no paint applications on his weapons, and he's lacking the boot with the knife. 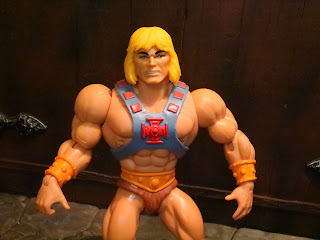 The Positives:
* For the Origins line Mattel is unapologetic about copying what worked so well in 1982: He-Man is ripped, tanned, and wearing very little clothing. While the articulation does betray this as a modern action figure, most other things about the figure do make this feel like a legitimate vintage toy: The bold colors, the lack of paint, and the simple details. The details look great, though, and are very crisp and clean. The harness is easily removable, too, and much more durable than the vintage toy harness. 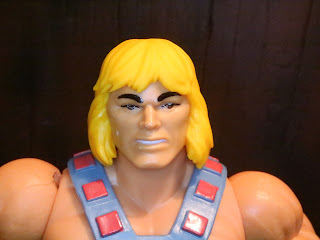 * The Masters for He-Man features longer hair and a different face than the vintage toy. It definitely looks more like the earlier minicomic depictions of the character. I like the angry look! It's very savage! Yeah, it's not the He-Man I had as a kid but for something like this it's kind of cool to have a different look. 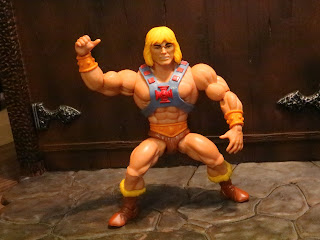 * The MOTU Origins line figures are built like the vintage toys but with modern articulation. While their bulky frames make the articulation a bit clumsy, they do feel like an evolution of the vintage line. Imagine what you would get if you mixed a vintage figure with a MOTUC figure. They're quite fun to play with.
* They're also modular. Like the Masters of the WWE universe figures, these can be easily separated to make your own lazy boy customs! 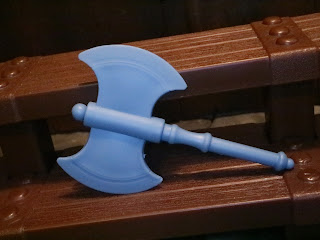 *  He-Man comes with his classic battle ax, here based on the minicomic design, too, rather than the toy design. I'm not sure I like it as well as I like the classic toy ax but it's certainly not a bad sculpt at all. Unlike the SDCC version this one doesn't have any paint applications. 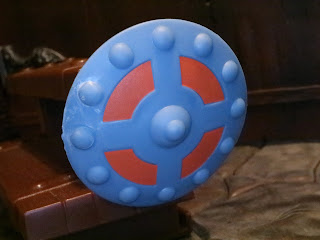 * He-Man also comes with his shield. The sculpt is excellent, though rather simple, the paint applications on the red insets are clean, and it works like the vintage shield with a handle inside and a clip for He-Man's wrist. 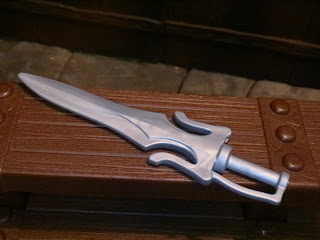 * Like Skeletor, He-Man also comes with half of the Power Sword. Unlike the vintage toy, the design of the Power Sword is modeled after the sword seen in Alfredo Alcala's art from original minicomics. It's a subtle difference from the original but you definitely notice it in hand. The sword does have the handguard, too, something most modern versions have lacked.
* Like the vintage toys, He-Man's and Skeletor's half swords can combne together to alow access to castle Grayskull. 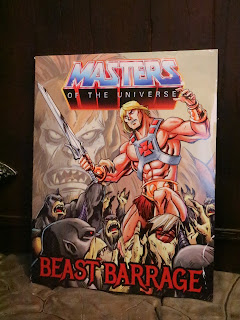 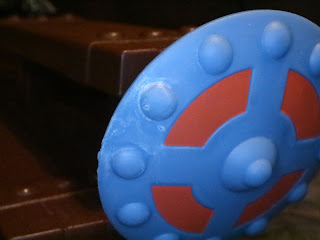 The Negatives:
* What is going on with He-Man's shield? The end looks damaged. Maybe Keldor through some acid on it or something?
* Also like with the vintage toys, He-Man's and Skeletor's swords don't fit together perfectly. They're loose at the ends. Bleh. 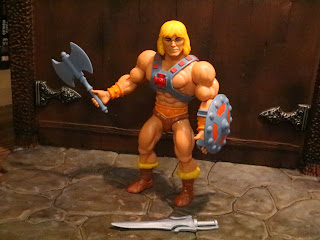 This isn't a straight remake of the vintage He-Man neither is it a Masters of the Universe Classics style update of He-Man nor a reimaging like the 200x He-Man. It's something new, intend to both feel "retro" and modern at the same time. The Origins He-Man is a toy first and foremost and, overall, I think he's pretty excellent. He comes with lots of accessories, is sturdy, and is a lot of fun. While I don't feel that MOTU Origins has really carved out its own identity yet the figures themselves have mostly been quite good. I'm excited to see where the line goes in the future and I'm hopeful that collectors will be satisfied and that some kids will have a chance to fall in love with these characters, just like we did so long ago.
He-Man/ Prince Adam is one of my favorite characters and I've reviewed so many action figures and toys based on him that he has his own review archive. Check out Fabulous Secret Powers for an abundance of He-Man reviews!
For more Masters of the Universe Origins reviews check out the following:
Battle Cat
He-Man and Prince Adam 2-Pack
Prince Adam & Sky Sled
Skeletor