Action Figure Review: Battle Cat from Masters of the Universe Origins by Mattel 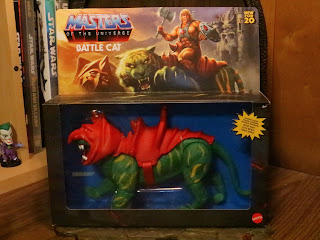 While I did review the SDCC 2019 set of He-Man and Prince Adam, today I'm doing my first review of an actual Masters of the Universe Origins toy that I found on a Walmart shelf and it's the mighty Battle Cat. I love Battle Cat so I was really looking forward to this one. He's one of the most iconic toys of all time and it makes perfect sense that Mattel would want to get him into MOTUO as soon as possible. What is Masters of the Universe Origins exactly? For those of you who might be unfamiliar with the line let me attempt to explain: MOTUO is Mattel's newest Masters of the Universe line and their first attempt at a mass market line since the 200x series in the early 2000s. Design wise, MOTUO is a return to the original vintage toy aesthetic with updated articulation. The first series includes 6 figures, Prince Adam with the Sky Sled, and Battle Cat. I found Battle Cat almost a month ago but I'm just now getting around to reviewing him. I've been pretty busy lately! Let's take a look at Battle Cat after the break and see how he turned out... 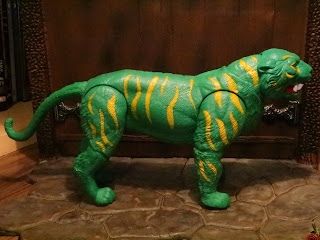 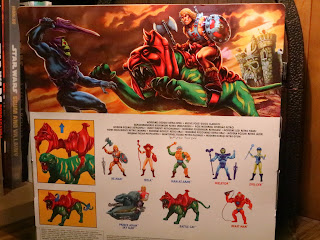 * You can see the box in the first photo but someone in the comments mentioned that I neglected to show off the back. The back of the card does have some pretty cool art. This one has an incredible picture of He-Man and Battle Cat fending off Skeletor as he makes his way to Castle Grayskull! 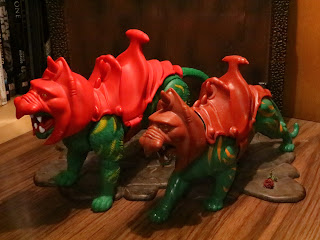 * On the left is the MOTUO Battle Cat while the vintage Battle Cat is on the right. There aren't any shared parts here. Unlike the vintage figure, Battle Cat us articulated. The colors are all a little brighter on the Origins figures, too, and the size of Battle Cat looks larger, though some of the size difference is because the new Battle Cat is not posed in a crouching pose. 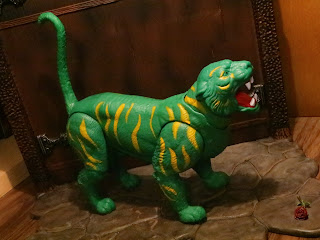 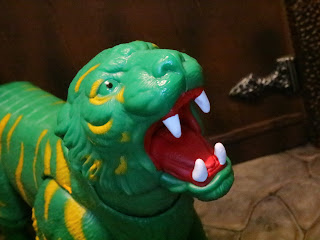 * The sculpt is fantastic on Cringer's head, too (I always want to call him Cringer when he doesn't have his helmet). Plus, he now has a hinged jaw so you can have him battle. Or talk! Or eat! Battle Cat and/or Cringer love all of those things, so there's really no wrong way to play with him. 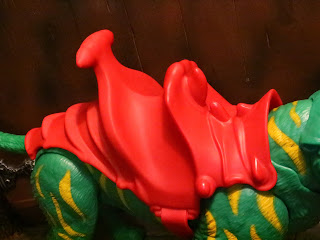 * Battle Cat's saddle is very close to the original figures though it is a bit brighter and the sculpt is a bit softer. I think it's a little easier to keep a figure astride it, though your opinion might vary. It's rather easy to get the saddle off and on and the straps don't feel brittle or breakable. 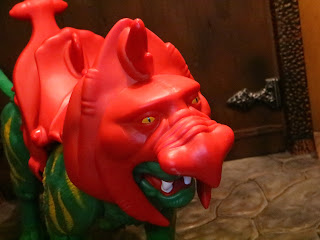 * Battle Cat's helmet looks great. It fits over his head and definitely makes him look way more fearsome. I also like the way that his eyes are painted on the helmet. I think of it as Filmation inspired detail though it's certainly something seen in the earliest minicomics which is where this line's inspiration seems to come from. * Battle Cat's stripes are iconic but, unfortunately, they are not applied very well here. They're kind of messy looking with missing spots of paint. There are also some pant splotches which just look really, really messy. 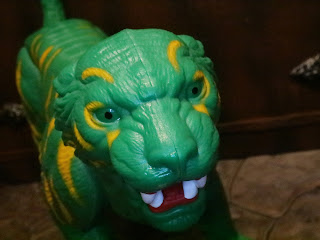 * I know this line is about being faithful to the vintage line and the minicomics but I really think giving Battle Cat's nose and eyes some paint applications would have helped. He looks kind if unfinished without them. 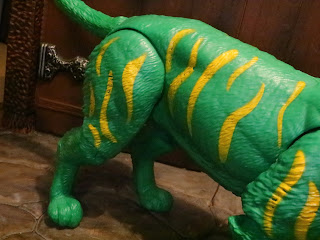 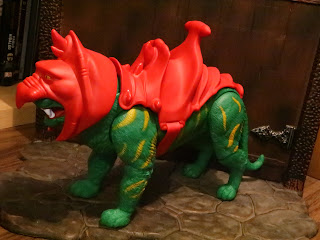 It kind of paints me to say it as I was really looking forward to this line but Battle Cat is really kind of lackluster. This is a durable toy and I certainly want one in my collection, but it feels a bit slapdash. Things like the missing paint details on the face the messy stripes really don't impress me much. I'm a mark for any MOTU product but I'm really feeling like there is a lack of vision for this line. I'm excited for many of the upcoming releases, though, so that's cool, but thus far Masters of the Universe Origins doesn't feel like it's bringing anything new to the brand. This is a Eh and a 1/2 release to me, which is quite disappointing.

For more Masters of the Universe Origins reviews check out the following:
He-Man and Prince Adam 2-Pack