Action Figure Review: Beast Man from Masters of the Universe Origins by Mattel 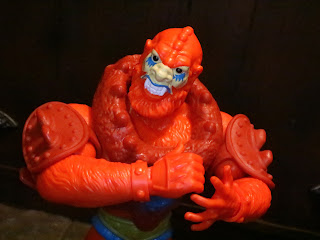 Let's continue on checking out the first series of Masters of the Universe Origins figures by taking a look at another one of the Evil Warriors! Today I'm checking out Skeletor's right hand (beast) man, Beast Man! Beast Man went through multiple different designs and coilors during his development in the original Masters of the Universe line but since 1982 he's been bright orange and savage (though red variants have been released from time to time). Appearing in nearly every piece of MOTU media Beast Man is definitely one of the MOTU A-listers and he was a shoe-in for the first series of figures. Beast Man is shipping in cases along with one Evil-Lyn, one Teela, and one Man-At-Arms, so he's a bit tougher to acquire than He-Man and Skeletor. Mattel's exclusive deal with the line is supposed to end soon, though, so hopefully getting Beast Man will soon be easier. That's a good think, too, because Beast Man is another of the figures in this line that truly feels like an upgrade from the vintage toy, as heretical as that might sound. Let's take a look at this Savage Henchman after the break... 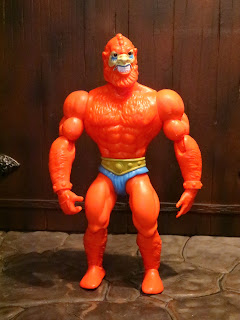 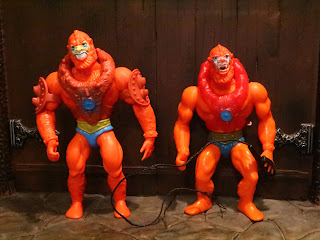 * On the left is the MOTU Origins Beast Man while the vintage Beast Man is on the right (my original childhood Beast Man's shoulder pads aren't in great shape, so he doesn't have them on). The Origins beast Man is obviously a remake of the vintage toy and I think he does a great job of capturing the charm of that toy while just looking overall better. The articulation, colors of his armor, and headsculpt are definitely improved. 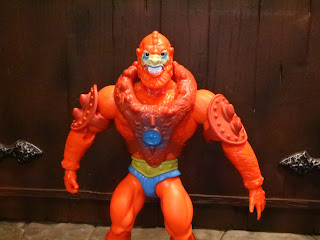 The Positives:
* Beast Man looks really good in the Origins line. The brighter colors of these toys suit Beast Man well and his orange fur really stands out. His armor also gives him some added bulk and the darker red used here (it's darker than the vintage toy) provides a nice contrast to the orange. 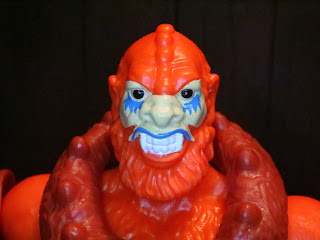 * The headsculpt is awesome. It's a great update of the classic Beast Man headsculpt with lots of detail and excellent paintwork. Seriously, it's very neat and clean with loads of detail. I do believe Beast Man has the best headsculpt of any of the series 1 figures released in MOTU Origins. He's incredible! 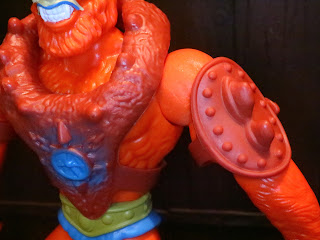 * One of the best things about the Origins line is that you can actually take the armor on and off without worrying about breakage. The vintage line frequently had breakage issues with the straps but Origins uses a rubbery plastic that works quite well. Beast Man's shoulder pads and collar look great. The little details like the rivets on the shoulder pads and the spikes around the collar are also noticeable, though in a way that is consistenty with the vintage styling. 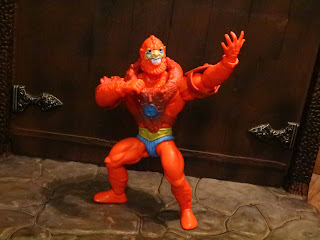 *  The MOTU Origins line figures are built like the vintage toys but with modern articulation. While their bulky frames make the articulation a bit clumsy, they do feel like an evolution of the vintage line. Imagine what you would get if you mixed a vintage figure with a MOTUC figure. They're quite fun to play with.
* They're also modular. Like the Masters of the WWE universe figures, these can be easily separated to make your own lazy boy customs! 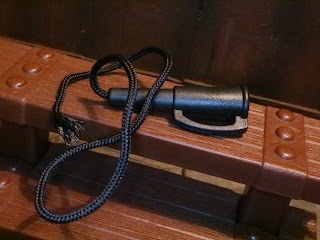 * Beast Man comes with his classic whip. It uses a small piece of cord rather than the simpler string of the original. It's a bit of an upgrade, I guess, and Biff Beast Man can hold it in either his right hand or his left (if you put his fingers through the guard). 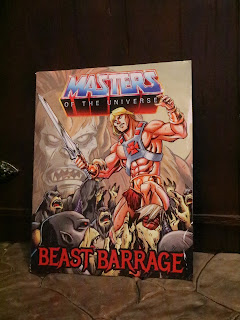 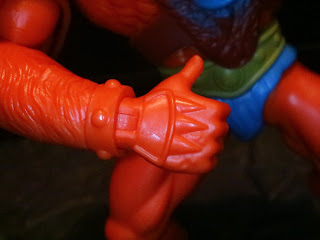 * Like the vintage toy Beast Man has the little spiked gauntlet on his wrist. Nice detail!
The Negatives:
* It would have been really cool to have given this detail a paint application. That would have been a small improvement for sure. 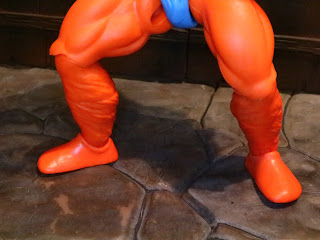 * Like the original Beast Man toy the Origins Beast Man has plain feat. No claws, no toes, nothing. It's like he's wearing orange slippers or something. This really would have been something that I think fans would be OK with Mattel improving in Origins. I down anyone was hoping Mattel would be so faithful to the vintage toy that they gave Beast Man "booties" again. These just look so odd here and they really stand out as a weird design decision. 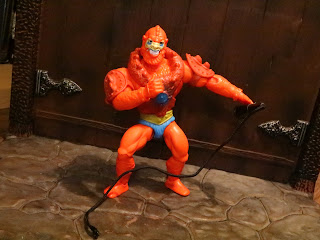 Beast Man is another solid entry in Masters of the Universe Origins and, like Evil-Lyn, I would argue that he's one of the figures that is truly an improvement ion the vintage. His armor is better, he seems a bit more intimidating, and his headsculpt is truly more detailed and fearsome than the vintage toy. Beast Man is a Great and a 1/2 figure and really stands out in the first series. I do wish he had more fearsome feet, though. I hope Mattel looks for more small ways to improve upcoming figures that still make them feel true to the vintage line. Beast Man could have been truly amazing, but he's still pretty good.

I've reviewed so many Beast Man toys that he has his own review archive. Check out Beast Manor for all the Beast Man reviews you could want!
For more Masters of the Universe Origins reviews check out the following:
Battle Cat
Beast Man
Evil-Lyn
He-Man
He-Man and Prince Adam 2-Pack
Man-At-Arms
Prince Adam & Sky Sled
Skeletor
Teela
Posted by Barbecue17 at 10/14/2020