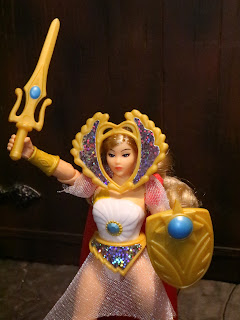 While a big part of the focus this week is on wrapping up 2020 reviews I couldn't help but take some time to show off the PowerCon 2020 exclusive She-Ra from Masters of the Universe Origins. PowerCon 2020 took place virtually last year so, like the Lords of Power set, this set was shipped to buyers either via PowerCon if you actually bought tickets for the show or via Big Bad Toy Store if you weren't planning to attend. I placed my orders through BBTS and my figure arrived in the mail last week. 2020 was the 35th anniversary of She-Ra: Princess of Power so Mattel created a brand new figure in vintage style Princess of Power packaging that fits in with the Masters of the Universe Origins line. While I think many fans would have loved to have had a vintage toy inspired She-Ra in the Masters of the Universe Classics line, Mattel's really pushing MOTU Origins right now. I'm glad we got She-Ra in Origins as early as we did (there's currently a mass market version of She-Ra released on the standard Origins card as well) and I really hope Mattel offers more PoP characters in the line than just She-Ra. Let's take a look at She-Ra after the break and see if she still has the power! 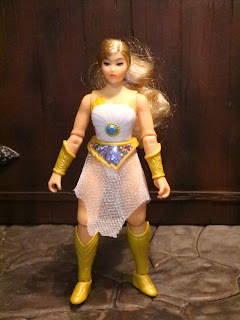 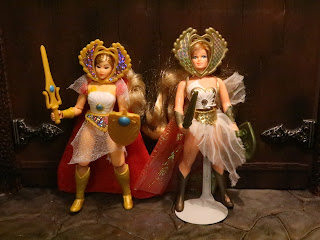 Comparison:
* The PowerCon Origins She-Ra is on the left while the vintage She-Ra from 1985 is on the right. While the Origins She-Ra is based on the look and style of the vintage She-Ra, there are quite a few differences. One of the biggest is that She-Ra's Sword of Protection looks more like He-Man's vintage minicomic Power Sword than She-Ra's vintage sword. Her gold is also more yellowish rather than the more metallic gold of the vintage toy. 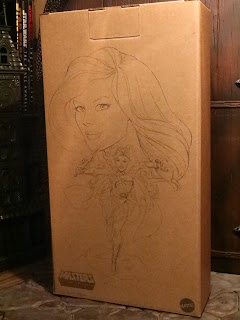 Packaging:
* Mattel always does really nice packaging for their Masters of the Universe exclusives. To help keep the card safe in transit She-Ra comes in a cardboard mailer with an image of both She-Ra and Princess Adora on it. It's simple art but I kind of like it. 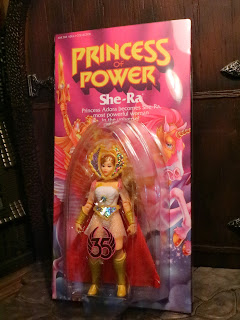 * Inside the box is She-Ra on her blister card. The packaging is actually quite collector friendly, allowing you to remove She-Ra from the package without damaging the blister or the backer card. The blister folds over the backer card, kind of like a Mythic Legions figure. The only irreversible think about taking She-Ra out of the package is removing her accessories from the plastic bag behind her and removing the plastic fasteners that keep her cape attached to the tray she is sitting in. 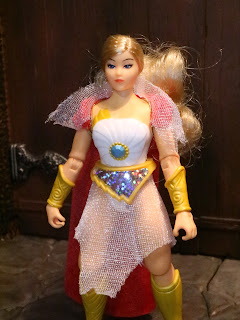 The Positives:
* Here's She-Ra! I think Mattel did a pretty nice job of capturing the look of the vintage toy with the look of a vintage MOTU figure. Mattel seems to be using brighter colors rather than metallic colors in this line, so She-Ra is decked out in goldish-yellow rather than metallic gold. Her boots and wrist bracers are quite intricate, though, and she has a cloth skirt around her waist. It's permanently attached to a belt with a very shiny, almost lenticular sticker on it. 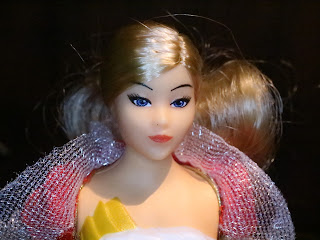 *  The standard MOTU Origins She-Ra has a more traditional MOTU face but this version of She-Ra looks very much like one of the vintage Princess of Power figures. She has softer, more doll-like features, and actual rooted hair. I kind of like it as it really pays tribute to the vintage toy and definitely gives Origins fans a different look for She-Ra. 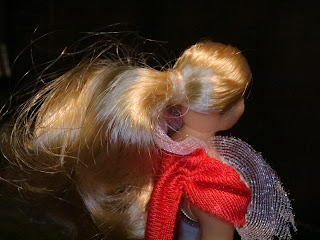 * This exclusive She-Ra also has real rooted hair, like a fashion doll. it's blonde and matches the vintage toy's look quite well. I've left mine in the hairband but you could take it out and make it look fabulous if you wanted to. 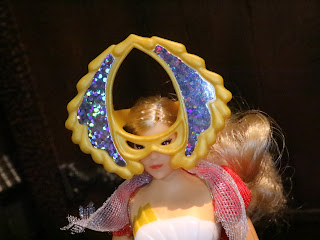 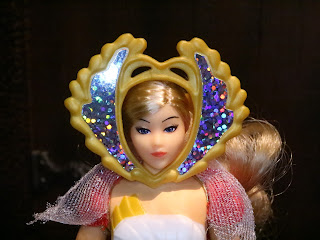 * Flip the mask and you've got She-Ra's classic toy styled tiara! This look is pretty cool, too, and it's what most folks are familiar with. 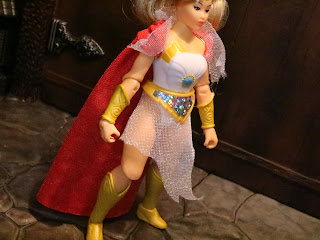 * She-Ra has a lot of actual soft goods on her outfit. Her cape is actual fabric and she has some actual lacey shoulder ruffles along with a lacey skirt that hangs down from her belt. 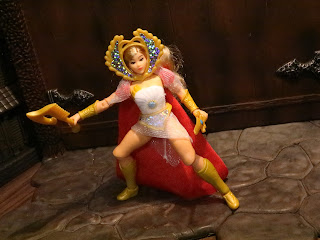 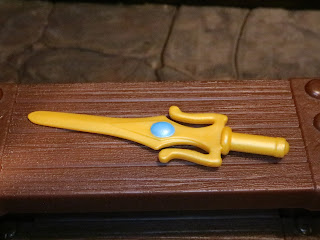 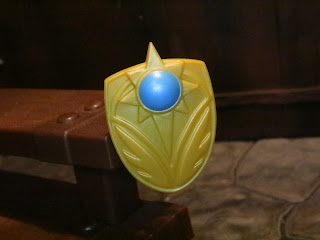 * She-Ra's second is her shield. It's fairly similar to the vintage shield although the top of the starburst now creates a point on top of the shield rather than being flat across. The gem on the shield is also painted blue to match the sword. Rather than a clip, She-Ra holds the shield via a handle on the back. 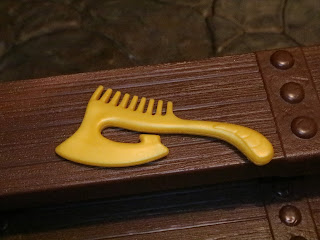 * She-Ra's last weapon is an ax. This is very similar to her MOTUC accessory (it is a different sculpt, though) where the Four Horsemen combined a bearded ax with the comb that the vintage She-Ra came with. It's cool that both She-Ra and her brother now come with the same three main accessories: A sword, a shield, and an ax. 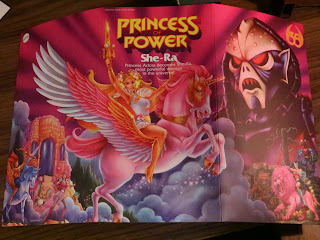 * Here's a shot of the backer card. Interestingly, it's a very sturdy cardboard piece that folds out into a three panel art piece. I dig it! Think there's any chance we see Bow, Catra, Clawdeen, Glimmer, Loo-Kee, or Kowl in this line? Anyways, flip it over and there's a pretty cool mini comic as well. 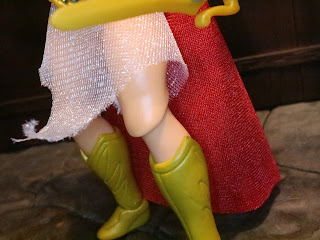 The Negatives:
* OK, so back when I reviewed Teela and Evil-Lyn I said I didn't mind these knee joints. For some reason, I now do. They really look terrible here! Just add a regular joint like anyone else as trying to hide it here just makes it more noticeable here. I'll definitely admit that this figure feels a bit overpriced (that's a running theme with PowerCon exclusives which are made in extremely low numbers compared to other con exclusives and which kind of help offset con expenses) but, darn, this is a really nice She-Ra figure. She's a great tribute to the vintage She-Ra toy and a nice addition to the MOTU Origins line. Yeah, the standard release is cheaper but I love the accessories, cloth goods, and the rooted hair and vintage styled face on her. She's an Epic figure with some fantastic packaging and definitely the best exclusive figures from PowerCon this year.
If you're a She-Raver who digs She-Ra/ Princess Adora then check out the figures I've reviewed: The Masters of the Universe Classics Galactic Protector She-Ra, the Club Grayskull She-Ra, the ReAction She-Ra, the She-Ra from the Super7 Battle for Etheria 2-Pack, the 1/6th scale Starburst She-Ra, the Funko POP! She-Ra #38, the POP! Pocket Keychain She-Ra, the M.U.S.C.L.E. slime She-Ra, the Sonic Wacky Pack She-Ra and She-Ra: Gold Edition, the Dorbz She-Ra, the Vinyl SODA She-Ra, and Mattel's She-Ra and the Princesses of Power She-Ra, Force Captain Adora, She-Ra vs Shadow Weaver, and Battle Armor She-Ra and Swift Wind.
For more Masters of the Universe Origins reviews check out the following:
Battle Cat
Beast Man
Evil-Lyn
He-Man
He-Man and Prince Adam 2-Pack
Lords of Power
Man-At-Arms
Prince Adam & Sky Sled
Skeletor
Teela