31 Days of Toy Terror- Skeletober: Battle Armor Skeletor from Masters of the Universe Origins by Mattel 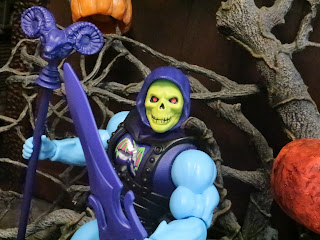 One of the toughest parts of planning and preparing for Skeletober has been holding off on reviewing any Skeletor items after Skelegod so I'd have a nice mixture of new and classic stuff to review this month. Yeah, I'm not exclusively reviewing Skeletor stuff for October but, c'mon, you know he's showing up here pretty frequently. Today I'm checking out the Masters of the Universe Origins Battle Armor Skeletor who was released much earlier this year but who I didn't find until June. I've always loved the Battle Armor variants of He-Man and Skeletor and Mattel did a really nice job with these. While He-Man was plagued with multiple little QC issues Skeletor turned out with hardly any issues. Ready to check out the Battle Armor variant of Skeletor, the evil lord of destruction? Ready for another spooky Skeleton to celebrate 31 Days of Toy Terror-Skeletober? Then join me after the break... 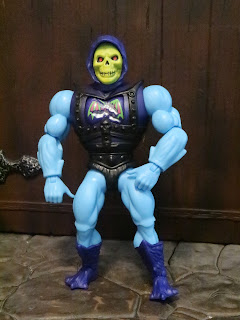 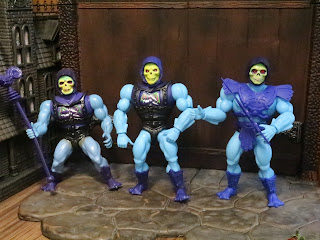 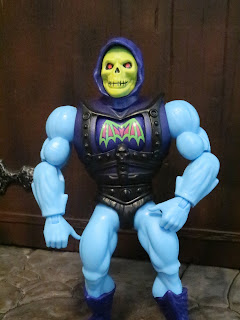 The Positives:
* Here's Battle Armor Skeletor! I love this look! It's not my preferred Skeletor (whereas with He-Man, I might just prefer the Battle Armored look) but it's a pretty awesome look nonetheless. The armor is just so wicked and cool with black and purple metal, lots of rivets, and a little skull under the sternum. There's also the super cool purple and green bat logo which just screams Halloween, right? 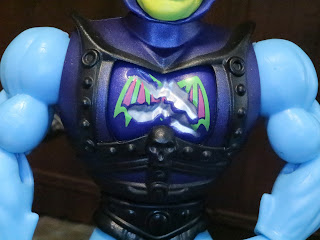 * Like with Battle Armor He-Man the battle damage feature on Skeletor actually works. Masters of the Universe Classics used swappable panels and it seemed likely that that's what we'd end up with in Origins based on the figures from Masters of the WWE Universe but no, Mattel managed to actually include the real deal. This works just like the vintage and a gentle tap causes the armor to go from no damage to showcasing one slash and then a second. It's simple but brilliant and really, really fun to play with. 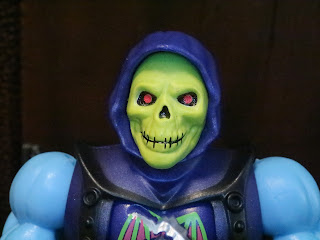 * This is a new headsculpt and I really like it. It's a bit less skeletal and more "fleshy, expressive corpse" (which was the name of my college Progressive Rock band) but it looks fantastic. I love the wicked grin and those deep set eyes. The nose is pretty fantastic, too, and there's just the right hint of green on the edges of the skull. 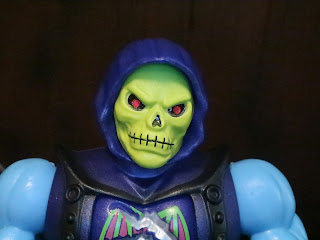 * The second headsculpt is a slightly irritated looking Skeletor. It's almost kind of funny but I like it. It's a bit Robot Chickenish if that makes any sense. It's still quite good, though. 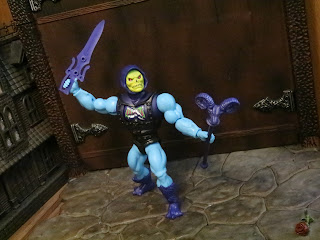 * The MOTU Origins figures are built like the vintage toys but with modern articulation. While their bulky frames make the articulation a bit clumsy, they do feel like an evolution of the vintage line. Imagine what you would get if you mixed a vintage figure with a MOTUC figure. They're quite fun to play with and they feel very sturdy.
* They're also modular and can be easily separated to make your own lazy boy customs! The arms don't come out on this figure due to the Battle Armor mechanism but everything else is removable, as usual. 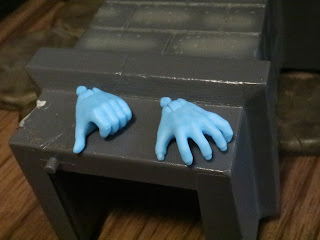 * Like the other deluxe figures Battle Armor Skeletor comes with two interchangeable left hands. If you want a figure closer to the vintage figure then you can use the open palmed left hand. If you want BA Skeletor to either be a southpaw or to be able to wield his shield then use the grip. It's not a big thing but it's a welcome feature that makes the figure just a bit more versatile. 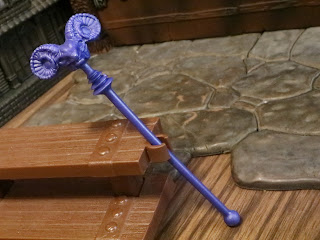 * Skeletor just has to have his Havoc staff with him, doesn't he? Like the vintage Battle Armor Skeletor the Origins version comes with a Havoc Staff that is very, very similar to the vintage toy. Not identical, mind you, but I could easily see someone who didn't have a comparison reference confusing the two. If you like the vintage Havoc Staff then this one ought to be a winner in your book, too. The purple is a bit darker than on the regular Origins Skeletor, too. 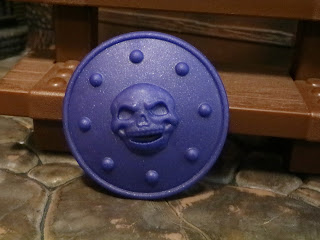 * A really cool extra included with this figure is this shield that's a new piece. I can't recall Skeletor ever using something similar so it's fun to see an all new accessory for this bony guy. The outer edge looks like a standard round metal shield but the center has a skull on it. Pretty creepy, right? 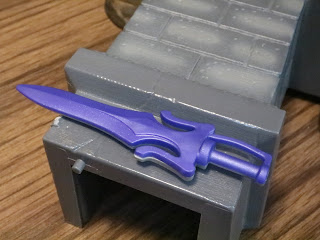 * Skeletor also comes with the purple half of the Power Sword modeled after the sword seen in Alfredo Alcala's art from original minicomics. It's a subtle difference from the original but you definitely notice it in hand.
* Battle Armor Skeletor and Battle Armor He-Man each come with half of the Power Sword and they can snap together, just like the vintage toys could. The Battle Armor swords fit together much better than the standard Origins version, too. 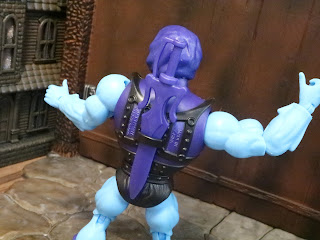 * Another newly implemented feature on this figure is the loop to hold the sword on the back of Skeletor's armor. Place his sword here and he can hold all of his weapons at one time! 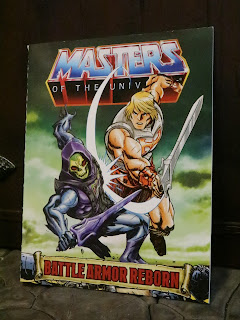 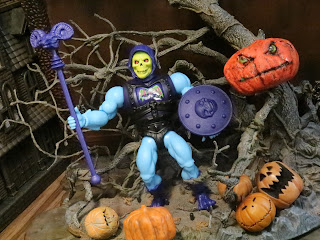 Battle Armor Skeletor is one of the highlights of the Masters of the Universe Origins line! He's a seriously Epic figure who is loaded with goodies. Functioning Battle Armor? Check. Three weapons, including one that's a newly created item (the shield)? Check. Two portraits that are both pretty good? Double check! This is a great figure and if you find one while out and about you really should pick him up if you dig the aesthetics of the Origins line. There's a lot of extras crammed in here that definitely makes Battle Armor Skeletor feel worthy of being called a deluxe figure. Hope you're not getting tired of skeletons and Skeletor yet because we're just getting started! Woohoo!