Action Figure Review: Trap Jaw from Masters of the Universe: Origins by Mattel 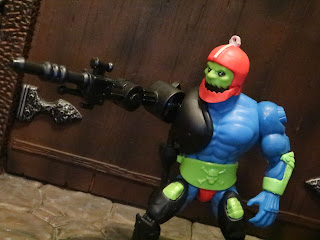 Trap Jaw is part of the second series of Masters of the Universe Origins figures and while some Walmart stores did get the series in last year it seems like most folks are finding him in 2021. Trap Jaw may not have originated in the the original series of 1982 Masters of the Universe figures but that doesn't seem to hurt his popularity as he's easily one of the most well-loved villains in the property. I have fond memories of getting Trap Jaw as a kid (I feel like I got him as a Christmas present) and I've always liked his unique design. The MOTU Origins Trap Jaw feels like kind of a mix between the vintage figure and the Filmation design, probably due to the brighter colors of the Origins line. Let's take a look at Trap Jaw and see if he's still a menacing master of evil! 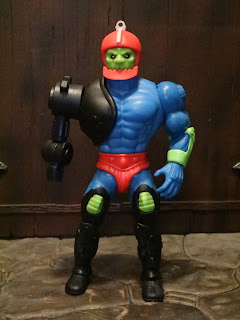 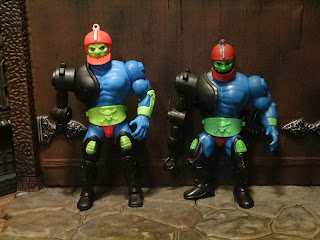 Comparison:
* The Origins Trap Jaw is on the left while the original vintage 1983 figure is on the right (sadly, it's not my original childhood figure). Origins captures all of the details and such but it's brighter and a bit larger. The chest harness isn't removable on the Origins figure, either. It's a uniquely molded torso. 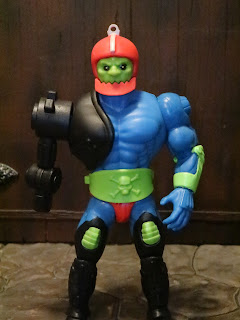 The Facts:
* Trap Jaw's cybernetically enhanced space pirate look is the stuff of legends and the MOTU Origins figure faithfully presents all of the stuff that stands out on Trap Jaw's outfit. Funky, clunky boots with green thigh pads, a big green pirate belt, and magenta trunks. He's also still got blue skin with a green face, which always makes you wonder what color his skin is supposed to be? (I think Robert Kirkman's Icons of Evil #1 comic handled this well, depicting Trap Jaw's green face as burned, damaged skin). The colors are definitely brighter on most Origins figures than on the vintage line which robs the figure of a bit of the menace the original figure has though it does help the colors to stand out. 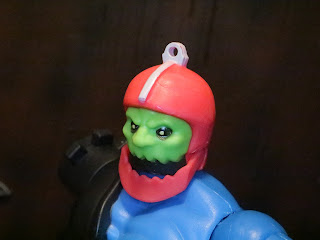 * Trap Jaw has the two features on his headsculpt that the vintage toy had: His jaw is articulated and he has a loop on the top of his helmet so he can dangerously use it to slide down a zip-line. The articulated jaw is quite fun! 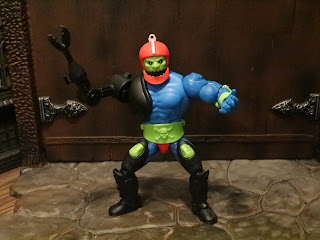 *  The MOTU origins figures are aesthetically similar to the vintage toys but with more modern articulation. While their bulky frames make the articulation a bit clumsy, they do feel like an evolution of the vintage line. Imagine what you would get if you mixed a vintage figure with a MOTUC figure. They're quite fun to play with and pretty durable, feeling more like a toy than a collectible.
* They're also modular. Like the Masters of the WWE universe figures, these can be easily separated to make your own lazy boy customs! 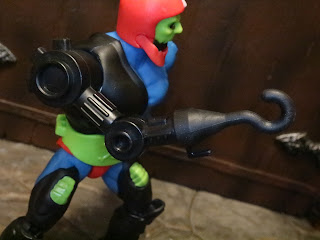 * Trap Jaw is, of course, sporting his mechanical arm. It's really nice and has some articulation on it so it's not just a solid piece. I believe there's a variant/ running change out there, too, which depends on the range of motion on the shoulder. Mine has a pretty good range of motion so I think I have the newer version. The different attachments do swap on and off and first up is the hook. The hook is clearly the default attachment for Trap Jaw, right? Well, here it is! Again, it totally drives home his space pirate image. 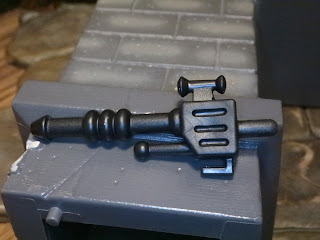 * My favorite Trap Jaw armament is the laser cannon arm and it looks great here. The sculpt is a bit softer than the vintage sculpt but it still looks like a formidable weapon. 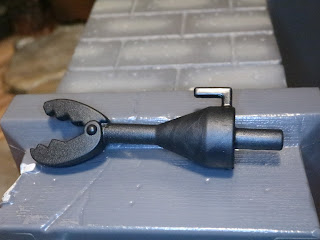 * Last up is the claw which still seems like it could be a nasty tool when wielded by Trap Jaw but it's definitely my last favorite of the weapons. It's not as sharp looking as I'd like. Seems a bit more like something Skeletor would use to make Trap Jaw clean out Panthor's litter box when Trap Jaw pisses him off. 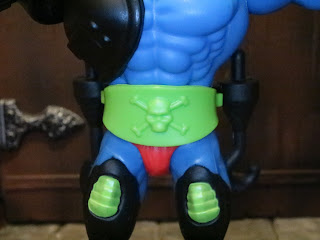 * Not only does Trap Jaw's cool pirate belt make a fashion statement but it provides a convenient place to store his other two tools when they're not in use. 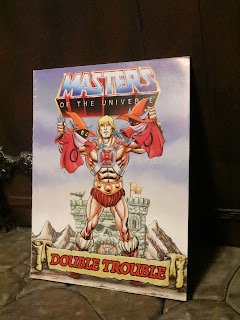 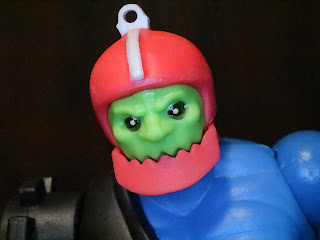 * I'm really not living the look of Trap Jaw's face. It just seems too light in color. I don't know. There's something very off about it to me. 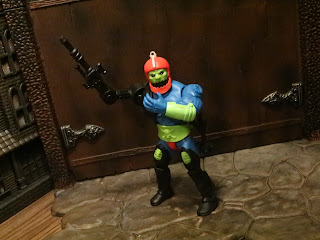 While I'm not as thrilled with the color of Trap Jaw's face the rest of the figure is excellent. He's got quite a few cool features (the mechanical arm, the storage for his tools on his belt, the functional jaw), lots of accessories, and he's just a darn fun figure. While She-Ra might be my favorite figure in the line thus far it's quite possible that Trap Jaw is my second favorite. He's really, really good! I'm giving him an Epic rating as you're really getting a lot of bang for your buck with this guy. There's a figure of Kronis coming soon in the Target Rise of Evil 2-pack (he comes with Keldor) so it will be pretty exciting to see how he compares to the standard Trap Jaw.