Action Figure Review: Panthor from Masters of the Universe Origins by Mattel 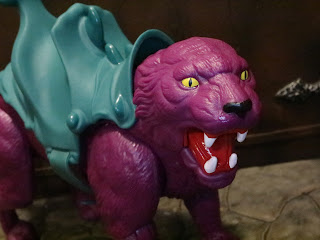 Whenever Battle Cat is released Panthor is sure to follow! Mattel released Battle Cat in Masters of the Universe Origins at the end of last summer and they've simply reused the mold to give us Panthor. That's how the vintage line and MOTUC did things, though, so it makes perfect sense to follow suit, especially given that MOTU Origins is such a nostalgia driven line. There's always been a lot of symmetry in MOTU and for the vintage second series of figures from 1983Mattel released heroic and evil counterparts for many figures. Besides releasing Zoar and Screeech (heroic and evil falcons) and Man-E-Faces and Tri-Klops (heroic and evil figures with three faces/eyes), Mattel also released Faker (evil He-Man), Evil-Lyn (an evil counterpart for Teela), and Panthor, the evil counterpart to Battle Cat. While the vintage Panthor was flocked to further set him part from Battle Cat Mattel has made the standard MOTU Origins Panthor unflocked with the flocked version coming as a Walmart exclusive. Ready to look at Skeletor's evil mount? Then join me after the break... 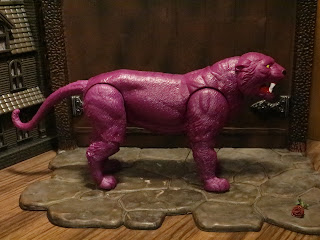 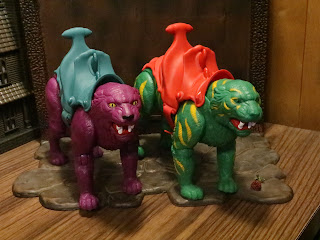 Comparison:
* Panthor is on the left while Battle Cat is on the right. As mentioned in the intro both of these figures use the same mold with the differences being the colors and Battle Cat's helmet (though I took it off for this picture). I will say that Panthor feels a bit more solid than Battle Cat. His articulation feels a bit smoother, too. 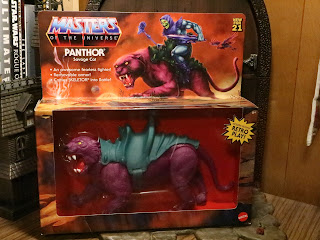 The Packaging:
* Masters of the Universe has almost always had beautiful packaging and Mattel really did a great job capturing the vintage feel of the line with the oversized packaging for the cats and vehicles. Check out the gorgeous art and that glorious window box! If you wanted to keep Panthor in the package I'd have a tough time blaming you as it's truly a thing of beauty. 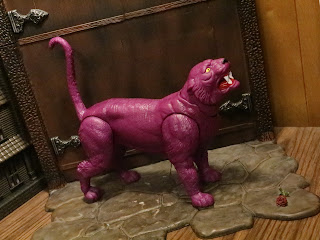 The Positives:
* Mattel did a nice job of subtly updating these figures. They still look vintage but the enhanced articulation does give them a bit more of a modern feel. Panthor's purple color is excellent and the details on the body show off his muscle and fur quite well. 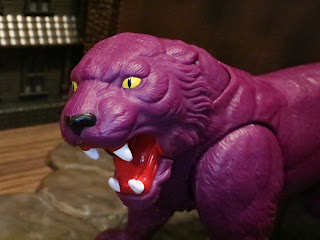 * The headsculpt looks pretty good, like the vintage figure given articulation and a fresh coat of paint. The eyes are sharp and piercing and the hinged jaw makes staging Panthor attacks more fun than ever before! 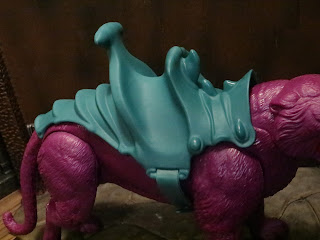 * Panthor has the same saddle as Battle Cat and, like with that figure, the saddle is very close to the original figures. I think it's a little easier to keep a figure astride it, though your opinion might vary. It's rather easy to get the saddle off and on and the straps don't feel brittle or breakable, so that's a plus. 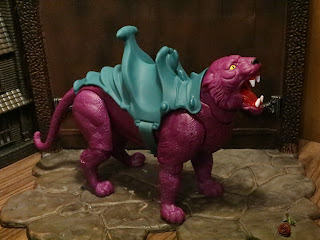 * Panthor does have articulation and the swivel hinge knees and tail along with the chest and neck/ head joints make for a figure that's clearly superior to the non-articulated vintage toy.
The Negatives:
* That being said, the presence of plain old swivel hips makes some of the articulation feel rather pointless. True ball joints or swivel/ hinge joints would have really improved Panthor. 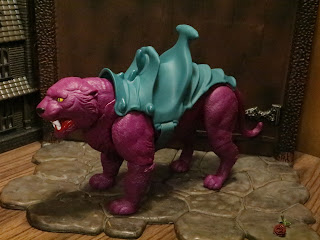 Despite not coming with a helmet, I actually think the Origins Panthor is superior to Battle Cat. He's essentially the same sculpt but he feels a bit sturdier and he has better paint applications. While I'm a bigger fan of Battle Cat as a character than I am of Panthor, I love Panthor's color scheme quite a bit and always find his purple and green to make for an amazing toy. I'm still now wowed by the cat body in MOTU Origins but I'm giving Panthor a solid Good. It would have been cool if he had come with a battle helmet like the MOTUC figure had but, alas, it wasn't in the cards this time.
If you're a Panthor fan I've also checked out the M.U.S.C.L.E. version of Panthor, the ReAction Skeletor and Panthor, the Mega Construx Panthor at Point Dread set and Skeletor & Panthor pack, the Dorbz Ridez Skeletor with Panthor, the POP! Rides Skeleton on Panthor #98 (flocked) and plain Skeletor on Panthor #98, and Panthor and Panthor (flocked) from MOTU Action Vinyls.
For more Masters of the Universe Origins reviews check out the following:
Battle Cat
Beast Man
Evil-Lyn
He-Man
He-Man and Prince Adam 2-Pack
Lords of Power
Man-At-Arms
Mer-Man
Orko
Prince Adam & Sky Sled
Roboto
She-Ra
She-Ra (PowerCon Exclusive)
Skeletor
Teela
Zodac