Action Figure Review: Panthor (Flocked) from Masters of the Universe Origins by Mattel 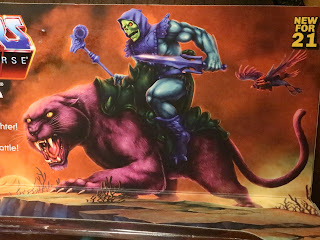 Today I'm going to do something I very rarely do: I'm going to review the Walmart exclusive flocked variant of Panthor without opening the package. Very rarely do I ever keep my stuff mint in the package and it's usually only reserved for older and rarer items. With the flocked Panthor, however, I sort of made a calculated decision based on a few different factors. First, I already have the standard MOTU Origins Panthor. He was just released earlier this spring, I've fully reviewed him, and I'm just not sure that my display requires two Panthors. Second, I'm a bit suspicious of how the flocking is going to hold up on this guy. I'm sure he's not going to molt or anything but there already seemed to be some damage on the figures I saw on the shelf so I'm not terribly fussed about keeping him packaged. Third, I really like the packaging on the MOTU Origins oversized releases but I don't want to rebuy anything just to add a boxed piece to my collection. Keeping Panthor in the box allows me to have a unique boxed piece without missing out on something for my display. Sound good?
Well, I'm still going to give my thoughts on this guy. I find it kind of funny that giving Panthor flocking has become a go-to variant. Shouldn't he just come flocked in general? That'd be like making Man-E-Faces spinning head a variant or Scare Glow's glow a variant (though I guess Funko actually did that, didn't they?). The flocked Panthor is a Walmart exclusive and comes in a box with a burst that proclaims he has realistic "fur" and a gold "Collectors Edition" label at the bottom. It seems like these came four to a case and quickly disappeared from Walmart shelves. The day I found mine there were three other Panthors when I left and they seemed to be newly placed on the shelf for display. I haven't seen one since so who knows if we'll see another shipment? I'd bet against it. Let's take a look at Panthor after the break... 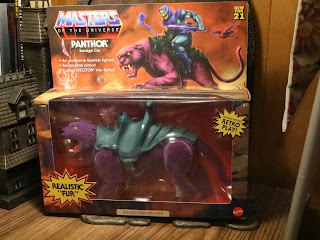 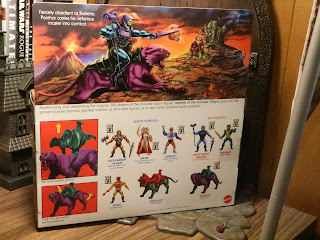 The Packaging:
* Masters of the Universe has almost always had beautiful packaging and Mattel really did a great job capturing the vintage feel of the line with the oversized packaging for the cats and vehicles. Check out the gorgeous art and that glorious window box! It's nearly identical to the standard release with just the differences I mentioned on the front being the big standouts. 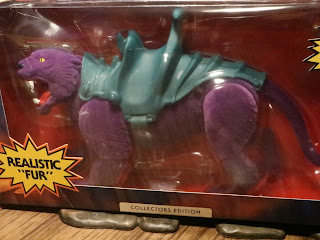 The Positives:
* For the full scoop on the figure inside this box check out my review of the standard Panthor. This seems to be the exact same toy but now with flocking like the vintage toy had. The color looks great, the flocking looks evenly applied and does simulate velvety fur nicely, and the paintwork on the head and face looks great and isn't hindered by the fur. It seems like a nice update of the vintage toy. 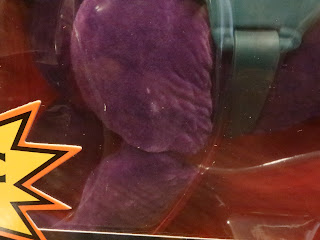 The Negatives:
* See those weird little white marks on the fur? They look like some sort of damage to the flocking. I picked the best of the four that were at my local Walmart when I found these and some of them seemed to have way more of these little flaws than mine does. That's a bummer, right? 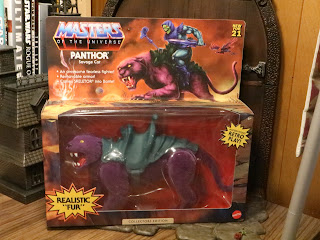 Flocked Panthor is a cool idea although I feel like he should have just been the default Panthor released. The damage to the flocking is a bit concerning, too. Maybe someone who has opened this can give us a little more insight. The rest if the  positives and negatives on this guy are largely the same as the regular figure although the price is much higher. The retail price is $39.88 or whatever and that's crazy. Is flocked Panthor $15 dollars more because he's flocked or because he's an exclusive? Either way, this is a very Eh and a 1/2 release. If you're a hardcore fan or really want a flocked Origins Panthor go for it. otherwise, just get the standard figure. He's really just as good and much less expensive.