Action Figure Review: Mer-Man from Masters of the Universe Origins by Mattel 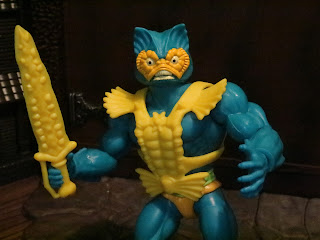 I haven't found any of the Masters of the Universe Origins series 2 figures yet (Scare Glow, Man-E-Faces, Trap Jaw, or Orko) but my order of series 3 figures did arrive last week from Big Bad Toy Store, so get ready for some new MOTU Origins reviews! Today I'm checking out the fiendishly fishy warlord of Eternia's oceans: Mer-Man! Mer-Man was one of the original eight Masters of the Universe figures from 1982 and he's long been a perennial favorite who's been in every MOTU line except for He-Man 1989/ New Adventures. I'm not labeling this figure as one of last year's reviews but this guy did sneak his way out at the end of 2020, along with the rest of series 3 and series 2. was released at Walmart at the end of 2020 but this version is on the card with the label "New for 2021" in the top left corner, so he's a repacked release that's technically new for this year. Now that the MOTU Origins figures are no longer exclusive to Walmart they're getting easier to find. Let's dive in and take a look at Mer-Man after the break... 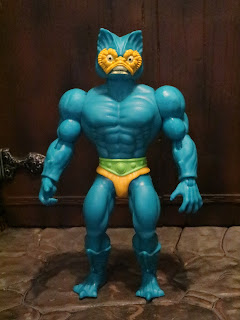 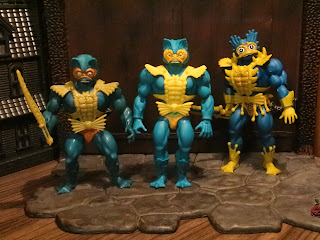 Comparison:
* The standard MOTU Origins Mer-Man is in the center flanked by the vintage Mer-Man (left) and the Lords of Power Mer-Man (on the right). This Mer-Man actually doesn't share that many body parts with the LoP Mer-man; only the basic stuff like the torso, upper arms, hands, and feet. His skin isn't as deep of a bluish green as the vintage toy and is a bit lighter than the LoP Mer-Man. 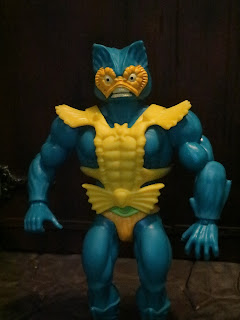 * Mer-Man is a really cool looking figure that, for the most part, nicely captures the look of the vintage toy. He's a bit lighter in color than the vintage toy but the effect is pretty similar. He's wearing some basic body armor that appears like it's made out of various fish bones, coral, and such scavenged from the ocean floor. His belt is painted green which is a detail the original figure didn't have. 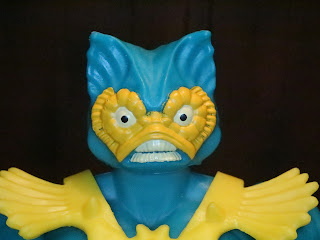 * I've never been a fan of the vintage Mer-Man headsculpt (I think it works much better as Stinkor) but the Origins sculpt looks more fish-like to me and definitely looks much fiercer. Mer-Man's eyes are pretty intense and his teeth look bared and ready for battle. 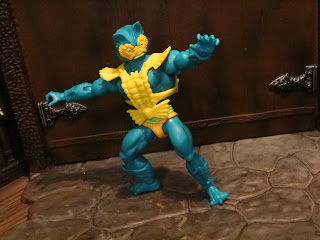 * They're also modular. Like the Masters of the WWE universe figures, these can be easily separated to make your own lazy boy customs! 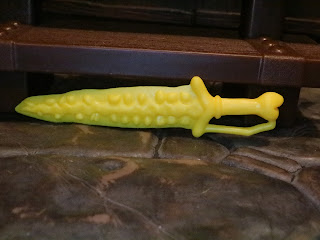 * Mer-Man's sword looks sharper than the vintage toy's sword, seeming more like a piece of coral or an animal bone rather than an ear of corn. It's the same sword as the Lords of Power Mer-Man but this time it's in solid yellow. 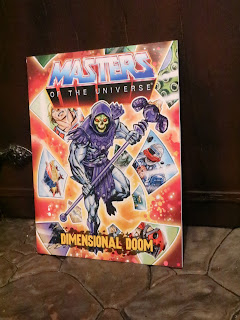 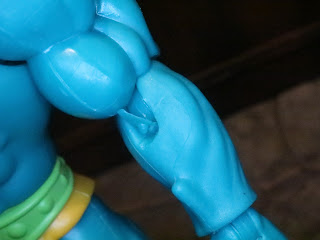 * Mer-Man had some flash in his elbow joints that I had to remove. It didn't cause any permanent issues and now things are working just fine but it does show the mass market nature of this line. 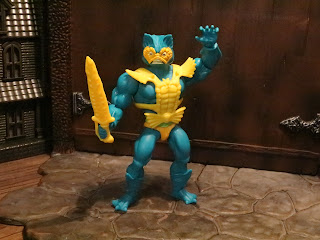 I don't like this version of Mer-Man as much as the Lords of the Power version that was released in the PowerCon 2020 set but this one is definitely much less expensive and more readily available. He's quite good, really, and I'd go so far as to give him a Great. These figures are definitely an odd mixture between the vintage MOTU line and Masters of the Universe Classics and there's something about them that I really like but also something about them that just doesn't get me as excited for them as I would hope. Again, they're nice updates to the vintage figures and have some of the same aesthetics. I love the bright colors on these and they do look fantastic as a group.

If you're a fan of Mer-Man, the guy who made talking to fish cool, then check out my reviews of the M.U.S.C.L.E. standard Mer-Man and green Mer-Man figures, the Panosh Place Mer-Man Collectible Eraser, the MOTU Colorforms Deluxe Play Set, the Monogram Mer-Man bag clip, the Loyal Subjects' Mer-Man, Super7's neo-vintage Mer-Man, the Mondo Exclusive Mer-Man, the Mega Construx Battle Cat vs Roton set, the MOTU Origins Lords of Power set Mer-Man, and the ReAction Mer-Man (Invisible) and Mer-Man (Carry Case Color).