Action Figure Review: Evil-Lyn from Masters of the Universe Origins by Mattel 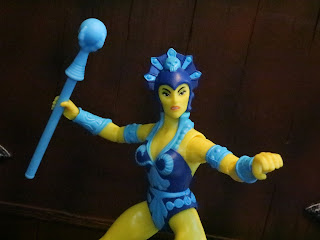 Let's return to checking out the first series of Masters of the Universe Origins figures from Mattel with a look at Evil-Lyn! While she wasn't released in the original first series of figures in 1982, Evil-Lyn's popularity definitely caused Mattel to put her in the first series of Origins figures. While I've liked most of the Origins figures so far, Evil-Lyn is the first one I've reviewed (well, other than the Sky Sled) that I feel is truly an improvement over the original figure. Evil-Lyn looks fantastic and really improves on the look of the vintage toy. Usually most Evil-Lyn toys and such take their cues from the Filmation and 200x series where her skin color is toned down to more of a grey but here Evil-Lyn is bright yellow and proud of it. Let's check out this Evil Warrior Goddess after the break and see what makes her so enchanting... 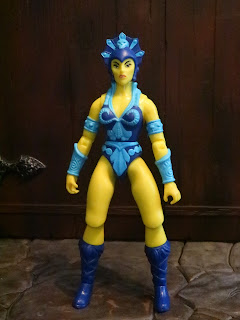 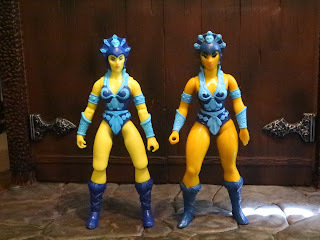 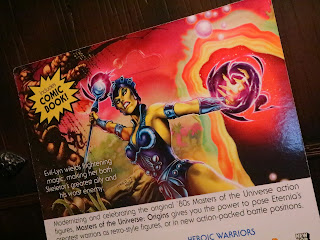 The Packaging:
* You've surely seen the packaging on these but I do want to include a shot of the cool art on the back of the package. That's an awesome drawing of Evil-Lyn, isn't it? I love the colors! I do wish she came with the magic spell she's using. A clip on piece like so many Marvel Legends figures have used would have been awesome. 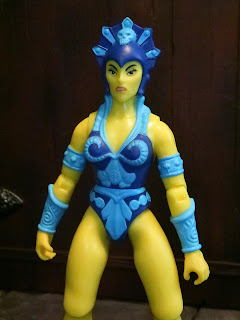 The Positives:
* These figures are intended to look retro with modern articulation and, with that design philosophy in mind, I think Mattel did a great job. The details are very clean and the colors are very bright, which is something I've always associated with MOTU. Masters of the Universe has never been afraid to have toyetic designs that are designed to just visually stand out first and foremost. The paint work is neat and clean and the little details you'd expect to find on Evil-Lyn are all present and accounted for. She shares a body with Teela, who I'll be getting around to reviewing quite soon. 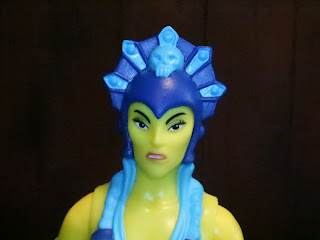 * While in recent years Evil-Lyn has been portrayed as more classically attractive, the vintage figure definitely seemed to portray her with very severe features, not unlike a Disney villain. That's more what we've got here and I really like it. Her headpiece is nicely rendered here and the face has a great scowl on it. She has an angular nose, very severe cheekbones, and some fantastic green eyeshadow. She truly looks like a fearsome villainess! 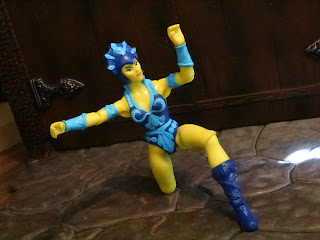 * While I've reviewed the MOTU Origins male body many times this is the first time we've seen the female body. It's quite good, maybe even with smoother articulation than the male body. I thought I wouldn't like the knee joints that feature the upper leg hiding the joint but in person they actually look pretty good and work quite well.
* Just like the male figures in the line the women are also modular and the limbs, torso, and head can be easily separated to make your own lazy boy customs! 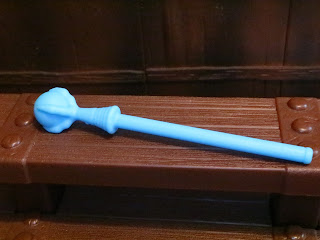 * Evil-Lyn comes with her magic wand and it looks nearly identical to the vintage toy. I mean, yeah, you would be able to tell these apart if you had them side by side, but at a glance this is very accurate and it looks fantastic. It nicely matches the light blue highlights on her outfit, too. 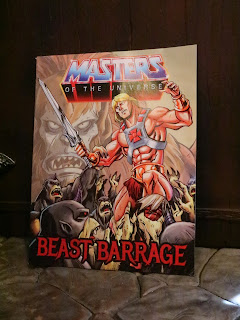 * Each figure in the first series also comes with a mini comic. Yes, an actual minicomic. Each character comes with the same comic but the art is really nice and it's actually an 8 page comic with a story. Not as cool as the vintage minicomics but still a nice extra. 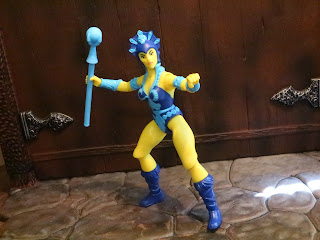 Evil-Lyn is probably my favorite figure in the MOTU Origins line and one of the few figures thus far who really feels like an improvement over the vintage figure. She doesn't have as many accessories as He-Man and Skeletor but what she does have is handled really well. She's a Great and a 1/2 figure and an excellent addition to the line. She's a colorful, durable, and fun action figure. Evil-Lyn is also proving to be one of the more difficult figures to find in the line, although with Walmart getting the massive cardboard displays of 80 some figures and the exclusivity of the line seeming to be over soon, hopefully you'll have good luck tracking her down!

For more reviews from Masters of the Universe Origins check out the following: