Action Figure Review: She-Ra from Masters of the Universe Origins by Mattel 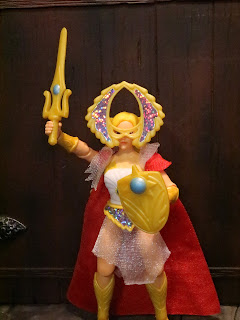 It's time for another review from the third series of Masters of the Universe Origins figures and this time we're checking out She-Ra, the most powerful woman in the universe! I'm a huge She-Ra fan and I'm thrilled that Mattel continues to merge She-Ra into MOTU lines as they can, although I really hope they start releasing some of the other She-Ra cast members in Origins as well. She-Ra did make her way out to Walmart at the end of last year but this figure is the newer version with the "New for 21" logo at the top of the card. Same figure so far as I can tell, too. This version of She-Ra does differ a bit from the PowerCon exclusive She-Ra who was sold as a PowerCon 2020 exclusive but who just shipped out in January of this year, and I'll point those differences out in a few minutes. It's really cool to see She-Ra on a vintage inspired MOTU card ready to fight alongside of He-Man! Let's jump in and see how she stacks up against the rest of the Origins releases after the break... 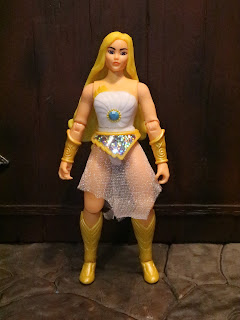 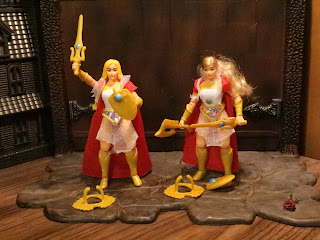 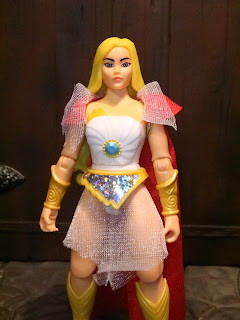 The Positives:
*  Here's She-Ra! I think Mattel did a pretty nice job of capturing the look of the vintage She-Ra toy blended with the look of a vintage MOTU figure. Mattel seems to be using brighter colors rather than metallic colors in this line, so She-Ra is decked out in goldish-yellow rather than metallic gold. Her boots and wrist bracers are quite intricate, though, and she has a cloth skirt around her waist. It's permanently attached to a belt with a very shiny, almost lenticular sticker on it. That's a very 1980s look for sure. 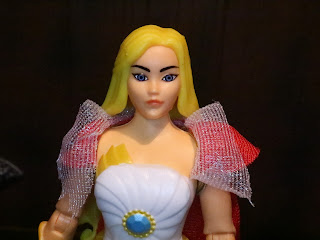 * I really like the look of this headsculpt. Maybe not as much as the PowerCon version but this She-Ra definitely fits in better with the other Origins figures. Had we gotten a She-Ra in the vintage MOTU line this is pretty close to how I imagine she would look. The eyes are really nicely painted and it's kind of cool to see that she resembles the vitnage toy and art rather than the Filmation likeness. Don't get me wrong, I love Filmation She-Ra, but it's cool to see her with an appearance based on the vintage toys and art, too. 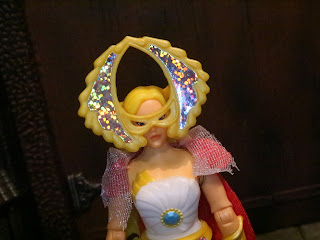 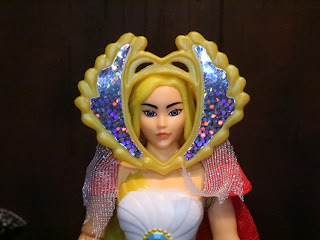 * Flip the mask and you've got She-Ra's classic toy styled tiara! This look is pretty cool, too, and it's what most folks are familiar with. I personally think this figure looks awesome this way. 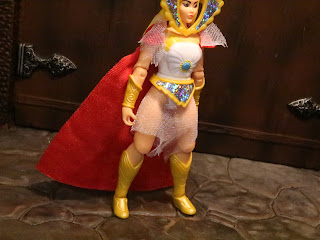 *  She-Ra has a lot of actual soft goods on her outfit. Her cape is actual fabric and she has some actual lacey shoulder ruffles along with a lacey skirt that hangs down from her belt. 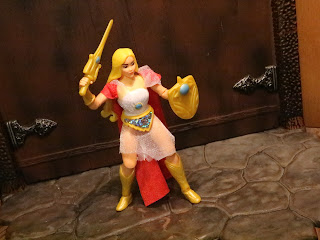 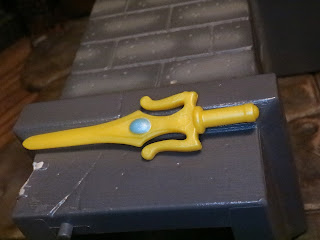 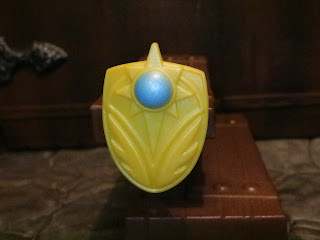 * She-Ra's second piece of gear is her shield. It's fairly similar to the vintage shield although the top of the starburst now creates a point on top of the shield rather than being flat across. The gem on the shield is also painted blue to match the sword. Rather than a clip, She-Ra holds the shield via a handle on the back. 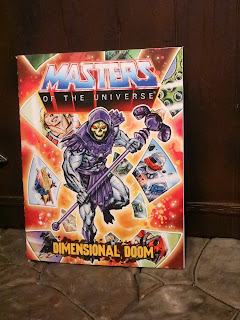 * The series 3 figures all come with the same minicomic: "Dimensional Doom." It's a cool little comic that does feature the series 3 characters and it adds a nice little something extra to the overall package. 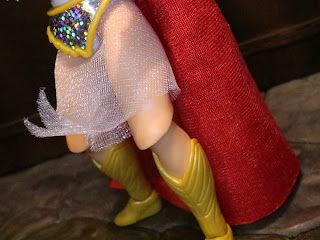 The Negatives:
* OK, so back when I reviewed Teela and Evil-Lyn I said I didn't mind these knee joints. For some reason, I now do. They're kind of an eyesore here! Just add a regular joint like anyone else as trying to hide it just makes it more noticeable. 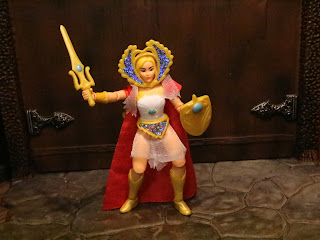 Considering that this She-Ra only costs $15 bucks and is loaded with soft goods, articulation, and a few cool accessories, I think she might be the best figure in the line yet. She-Ra is the first new character in Origins who didn't appear in the vintage toyline so that's pretty cool. I'm not sure how well you'd be able to truly work her in seamlessly into a vintage MOTU collection but she's an Epic addition to the line. Last year MOTU Origins left me a but underwhelmed but now that I'm starting to get more figures and characters in hand I'm definitely starting to feel it's charm. There's one more series 3 figure left to check out, so expect them shortly....

If you're a She-Raver who digs She-Ra/ Princess Adora then check out all of the figures I've reviewed of her: The Masters of the Universe Classics Galactic Protector She-Ra, the MOTU Origins PowerCon 2020 She-Ra, the Club Grayskull She-Ra, the ReAction She-Ra, the She-Ra from the Super7 Battle for Etheria 2-Pack, the 1/6th scale Starburst She-Ra, the Funko POP! She-Ra #38, the POP! Pocket Keychain She-Ra, the M.U.S.C.L.E. slime She-Ra, the Sonic Wacky Pack She-Ra and She-Ra: Gold Edition, the Dorbz She-Ra, the Vinyl SODA She-Ra, and Mattel's She-Ra and the Princesses of Power She-Ra, Force Captain Adora, She-Ra vs Shadow Weaver, and Battle Armor She-Ra and Swift Wind.