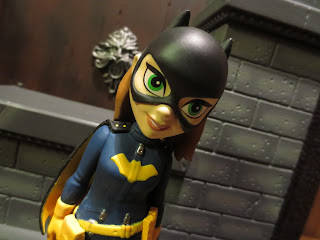 A week or so ago I reviewed the Classic Batgirl from relatively new Funko's Rock Candy line of vinyl figures and today I'm looking at the second Batgirl from the series: Modern Batgirl! Based on the costume introduced in the Batgirl of Burnside storyline during the end of the New 52, this figure manages to capture the likeness of a Batgirl costume design that seems to be nearly universally loved. I love this costume design, too, and I was thrilled that Funko put her in the first series of these small, vinyl collectibles. So far I haven't heard anything about this line continuing but with a great design aesthetic and low price point of around $10, these seem like they should be pretty popular. Let's check out this cool Modern Batgirl after the break... 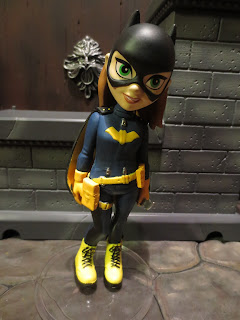 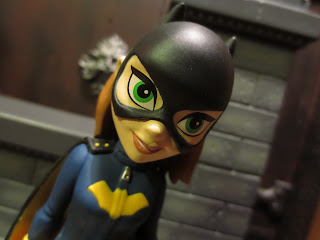 * I really like the look of this line! The style is great as it manages to just have a slightly stylized look without going overboard. This is the modern Batgirl costume designed by Cameron Steward and Babs Tarr and it's rendered very nicely here. The paintwork on her face is excellent and she has a very cute expression. This one is definitely my favorite of the two Rock Candy Batgirl releases. 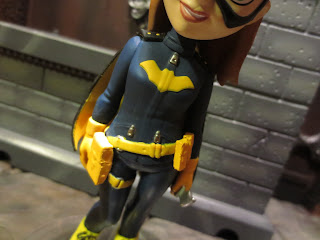 * I really like the design and detail in these figures. The figure is molded in a really solid plastic and I can definitely see the appeal here. They kind of remind me of a mixture between Vinyl Vixens and Mattel's DC Super Hero Girls (if you can imagine that). Babs' modern outfit has some cool elements such as the zippered leather jacket, the utility belt with larger pouches, and the button on cape, and all of these things are captured here. I'm really liking it! 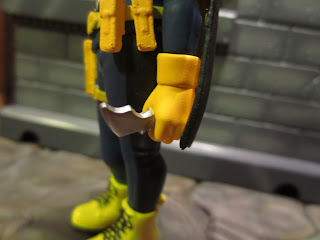 * Check out that Batarang Babs is packing! It's a cool little detail and gives the statue a nice bit of menace. Barbara looks all happy and smiley but look a little closer and you can tell she's totally ready for action if something should go down. 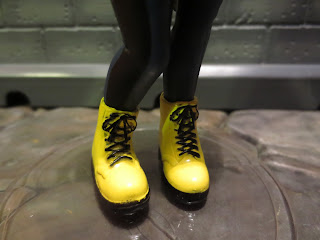 * Again, I love the big yellow boots of this costume design! They're just so much cooler than high heels or platforms and really seem like something you could change into quickly and fight crime in. 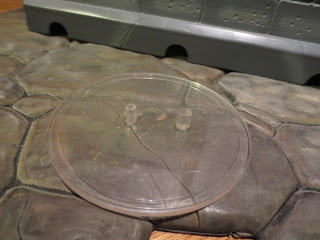 *  Batgirl comes with a simple clear plastic stand to help keep her on display. It's nothing fancy but it plugs into her feet securely and keeps her from tipping over. Not much more you can ask for in something like this, am I right? 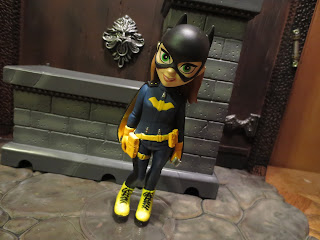 * My only problem with this figure is that Batgirl tends to lean a little to the left. That's not a political observation, by the way: The figure really and truly does seem to lean left. It seems not like a problem with the stand but with the way the feet and legs are sculpted. I don't think she's going to tip over but she does look a bit odd on the shelf. 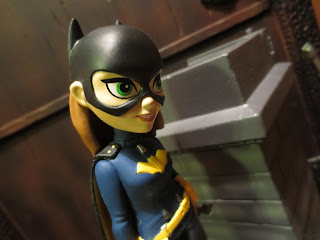 I like both Batgirl figures in this series but I definitely like the Modern Batgirl a bit more. I'm a huge fan of this costume and the paintwork and molding seem to overall be stronger here. The lean the figure has is a bit annoying but it's not a deal breaker at all. Considering the low price on these and the really appealing aesthetic of this series, I really hope these turn out to be a hit. I like these better than many of the other Funko lines being released. While Kotobukiya's Bishoujo line is still my line of choice for collecting the female heroes of the DC Universe, I could easily get into Rock Candy do if the line shows itself to be willing to go a bit deeper in character selection.

Along with the Rock Candy Classic Batgirl, I've reviewed dozens of other Batgirl figures, statues, and collectibles over at my virtual Batgirl museum. Check it out!
Posted by Barbecue17 at 8/19/2016