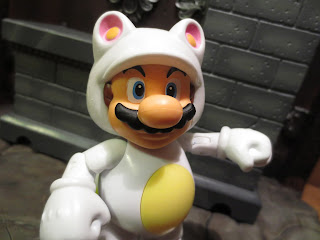 White Tanooki Mario is the last figure from World of Nintendo series 2-1 and he's one of the two straight repaints in this series (the other one is Red Yoshi which I reviewed a couple of days ago). Since there are so many uniquely shaped and sculpted characters in this series, the repaints probably help Jakks to recoup some of the money spent on all of those unique molds. While pointless repaints can truly be a bane of action figure collectors, so far Jakks has done a nice job of selecting figures where repaints actually make sense and capture another unique appearance for the character. We've received three differently colored Yoshis, a couple of upgraded Samus armors, Shadow Link, and now a White Tanooki Mario. Ready for a closer look at this invincibility laden costume from New Super Mario Bros. 2? Then join me after the break... 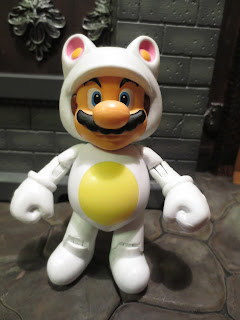 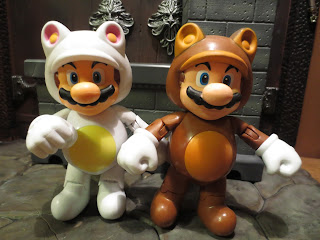 A standard Tanooki Mario was released earlier this year and this White Tanooki Mario is simply a repaint of that figure. I wasn't crazy about the articulation on this figure (especially the lack of wrist swivels) although I do like the accuracy of the sculpt. Since this figure is a simple repaint, check out my Tanooki Mario review for a more in-depth look at this figure's sculpt and articulation. 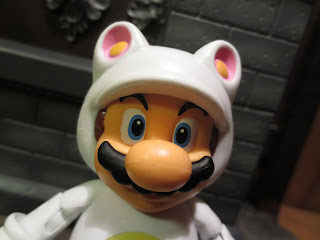 
* The paint work is really quite clean on Mario's face. It really looks like his face is poking out of a hooded costume, doesn't it? I'm also loving the pink and yellow ears. This is some really nice paintwork here and it helps to bring out the best in the sculpt. 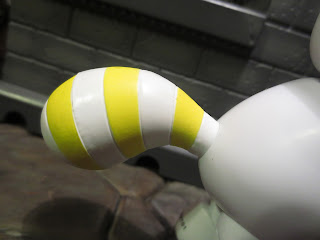 * The yellow and white paint scheme on this figure looks really, really good. In the game the White Tanooki suit is kind of sparkly, something that would have been tough to capture on an action figure. I like the paint colors chosen here, though. While the white could be a bit brighter, it really balances nicely with the yellow highlights. Don't you just love the ringed tail on this figure? It's so colorful and crazy! 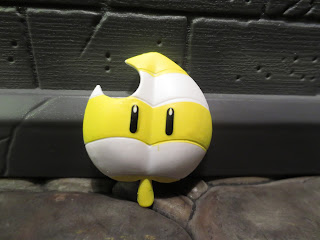 * Check out this awesome Invincibility Leaf! It's White Tanooki Mario's secret accessory and it looks incredible. It's a repaint of the Super Leaf from Tanooki Mario but it's still it's own unique poer-up item. In New Super Mario Bros. 2 the Invincibility Leaf is given as a power-up if you fail to complete a level after a certain number of tries. The paint work is rather viviv and I love the presence of those classic eyes on an accessory. So cool! 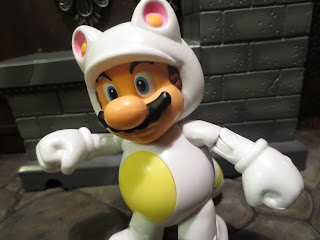 As crazy as it sounds, I actually like this repaint better than the original Tanooki Mario figure. The paint is a bit cleaner and looks much nicer. I love the color combination of white and yellow used here! While the articulation is still rather stunted, this guy still looks pretty cool standing on the shelf with a variety of other Mario figures and Nintendo characters. World of Nintendo is one of my favorite lines right now and it's definitely one of those toylines that gets more impressive as you continue to add more figures to the display. This Tanooki Mario variant is superior to the original and gets a Good and a 1/2 from me!

I've reviewed quite a few Mario action figures now such as the recent Cat Mario variant, the ready for action Fire Mario, the powerful Gold Mario, the plain ol' Mario, and Tanooki Mario, which this figure is simply a repaint of.

I've also reviewed nearly every other World of Nintendo 4 inch figure released (and a few of the 2.5 inch figures), including: