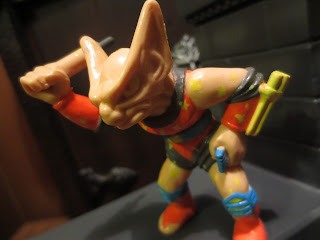 It's time for another look at a minifigure from Galoob's 1991 blind bagged toyline Trash Bag Bunch: Wastor! A member of the villainous Trashors, Wastor is a really odd looking duck. It's interesting to look at these figures years after the fact and try to wonder what was going on in the designer's mind. More about Wastor after the break... 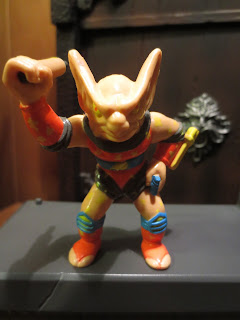 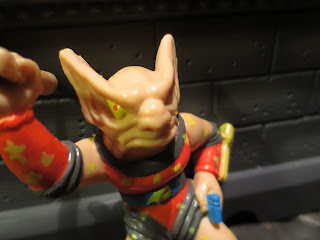 * Wastor's a funny looking guy, isn't he? He's kind of bat-like with those long ears and odd, scrunched up face. He's an unusual looking bad guy for this line. He actually looks more like a villainous troll doll or something. 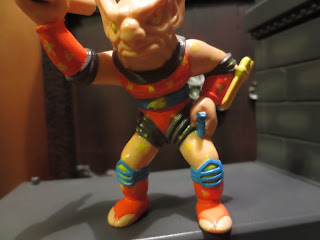 * This guy outfit is loud. I mean, this thing is garish. A bright orange singlet with yellow stars and blue knee pads? Wow. Just wow. This guy definitely has the most ridiculous costume I've ever seen on a figure in this series. I'm not completely sold on it but it does stand out and serves as a conversation piece. 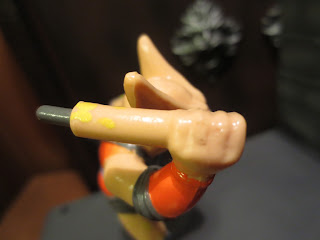 * Wastor has some sort of key card in his left hand while his right hand is wielding a...rolling pin? Yup, he has a rolling pin. Is this guy trying to win a battle against the Disposers and pollute the earth or get mad at the kids because they're late for dinner? I like the idea, actually, but it doesn't go along with anything else related to this character. Plus, how strange is it that Wastor also has stars on the rolling pin which match his outfit? 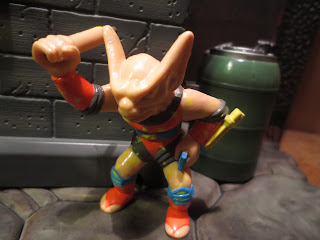 Wastor certainly has an impressive sculpt and paintjob for a minifigure from 1991but he's also kind of unappealing to me. I don't know; I just can't behind him like I can so many of the other figures in this line. With his dopey facial expression, rolling pin of doom, and outfit that would make Napoleon Dynamite think twice, Wastor just seems pretty Eh and a 1/2 to me. I'm just not feeling this guy. There are some amazing minifigures in this line but Wastor is not one of them.

I've been reviewing more Trash Bag Bunch figures over the past few weeks. I've reviewed some more of these guys a year or two ago:
Bio-Degrador
Skuzbeast
Posted by Barbecue17 at 8/20/2016