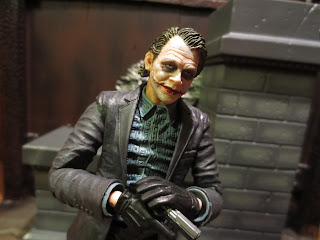 Today I'm looking at another release from Medicom's MAFEX range of action figures: The Joker in his bank robbery duds from the opening scene of The Dark Knight. Now, over eight years out, I still absolutely love The Dark Knight and will gladly name the late Heath Ledger as my favorite Joker. Over the years Ledger's unique, disturbing speech pattern has become the dominant Joker voice in my head when reading Batman comics, only replaced by Mark Hamill's exceptional Joker voice in certain situations. I enjoyed Jared Leto's Joker from the recent Suicide Squad and I will gladly go on record in stating that I don't believe we've seen a bad on-screen Joker performance yet. Still, no one has topped Ledger. And, for those of us who were present for the lead-up to the Joker's appearance in The Dark Knight with the stinger at the end of Batman Begins, the casting announcement, teasers, the viral marketing campaign, and, sadly, Ledger's tragic death, I'm not sure anyone ever will. Ledger's presence haunts every frame of that film in which he's immortalized. The opening scene of The Dark Knight is still breathtaking and I'm thrilled that MAFEX is giving us a chance to represent it in our collections with this new figure. Officially listed as figure No. 015 The Joker (Bank Robber Ver) this guy is a neat variant of the standard Joker I reviewed last November. Ready for a look at the latest MAFEX release? Then join me after the break... 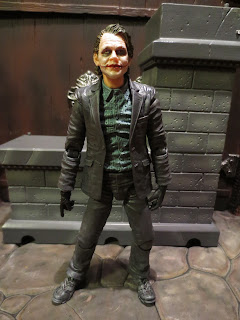 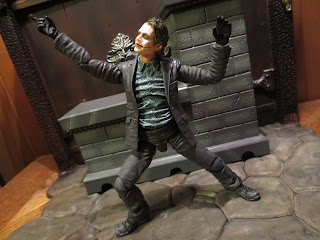 * Did you read through the articulation list on this guy? There are joints on this figure that I struggled in trying to describe. If you can't get this figure into a particular pose, you probably can't get a human being into that pose, either. Unless that human is Doug Jones. Anyways, much of the articulation is fairly well hidden as well, which is always a plus. This guy is incredible to fiddle around with and find cool poses for. 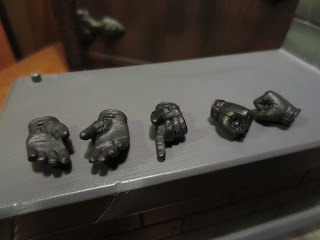 * The figure comes with five different hands which can be utilized by the Clown Prince of Crime. He has two open grips, two fists, and a right hand with a pistol grip to hold his Glock. This isn't as many as the previous figure had (it had 8) but these still provide a decent range of posing and display options. They swap pretty easily and while the pegs on the figure seem somewhat delicate, I'm not too concerned about any breakage. 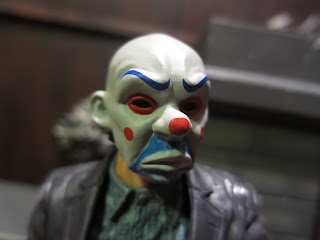 * I'm going to talk about the standard Joker head in a minute but let's first talk about the masked head. It's awesome. The hair on the back has the stringy look that Ledger sported for the role (complete with DIY green dye) while the mask looks soulless and blank. This is a great sculpt and having an alternate masked head was definitely the right way to go. 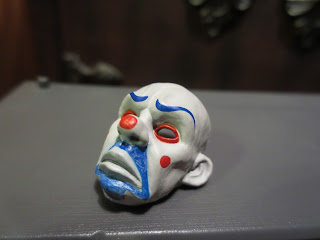 * In case you want to pose the Joker holding his mask rather than wearing it, the figure does come with an alternate mask accessory. It's sized correctly although it doesn't actually fit on the unmasked Joker head. Still, it's a cool extra and one that's really fun to use in various poses. 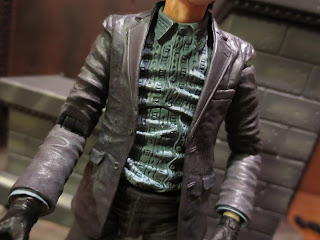 * I love this outfit. It's not as crazy as the Joker's standard outfit but there is just a hint of the classic Joker costume here to be interesting. The print and sculpt are awesome on the shirt and the jacket and trousers look worn and lived in. * The Joker's sport coat is a separate piece that simply rests over the figure's torso. The loose hanging piece does help to give the figure a bit more of a life-like work and is molded in a soft enough plastic that it doesn't inhibit the articulation, either. 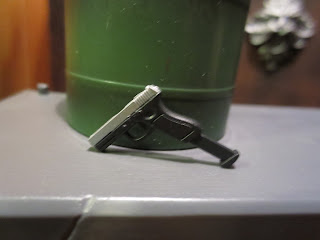 * To help him eliminate some of his crew, the Joker comes with his modified Glock 17. It looks to be the same accessory that comes with the previous TDK Joker, but that's OK: It's a realistic looking pistol and fits in the toy's alternate trigger finger hand well. 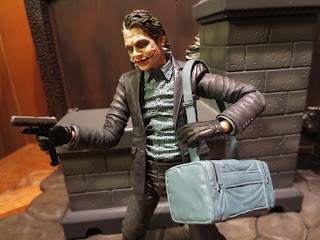 * To tote some explosives around the Joker comes with his own duffle bag. It's blue, has a decent sculpt, and it can be held in a pretty convincing manner by the figure. 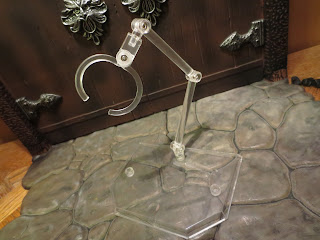 *  This figure comes with the same stand that the standard Joker figure had and it's still quite good. The stand comes in the box fully assembled and features multiple points of articulation to help keep your figure posed. The stand features: A swivel at the base, three hinges on the arm, a swivel at the top, and a hinged clasp to secure the figure. The arm can be removed from the base and placed in any one of the three holes present there. These seem to be pretty standard across MAFEX releases so even though a character like the Joker doesn't need to be posed in mid-air, there is some nice uniformity here. 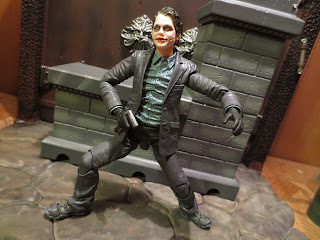 * Does the Joker seem a bit...unburdened? Yeah, the figure feels a little light. Considering that the standard Joker came with 8 hands, a pistol, rocket launcher, machine gun, knife, cards, and two interchangeable hands, this guy's accessory complement just seems a little too light, particularly for the price. A sawed off shotgun or some explosives would have been really nice 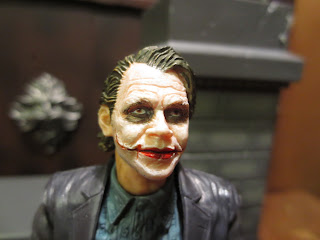 *Here's my biggest problem with this figure: This portrait just doesn't look like Heath Ledger to me. Looking at a number of other MAFEX releases, I'm not sure if the intention was to make this a realistic likeness of the Joker's appearance in the film or a stylized likeness (Medicom seems to go back and forth depending on the license and sometimes on the individual figure). The paint is exceptional but I'm just not seeing Heath Ledger here. You know who I do see? Judge Reinhold. I promise you, that's exactly who I saw the first time I started photographing this figure. * Don't Panic! This isn't breakage! Just know that MAFEX figures are fairly easy to assemble and disassemble. This seems to help make them more durable (joints don't snap; they just pop out) and possibly somewhat customizable, too. These are definitely action figures that you display, pose, and photograph rather than just straight up play with. They're fun but they're just designed with a different purpose in mind. 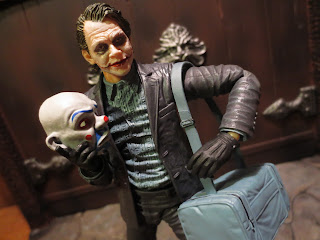 I think this Joker is another pretty solid release from MAFEX. Again, I'm not completely sold on the unmasked portrait's Ledger likeness, but maybe that wasn't what MAFEX was going for. It's tough to tell. The figure is just aces, though, and the accessories, while not as plentiful as previously, still really fit the figure. I think that overall this guy just works a bit better than the previous MAFEX Joker, even with the likeness issues. Considering the prices on these, I do expect a bit more. I'm not giving this guy my highest marks but I will give him a Great rating.  It's always nice to see more representations of Heath Ledger as the Joker, particularly in the 1/12th scale. 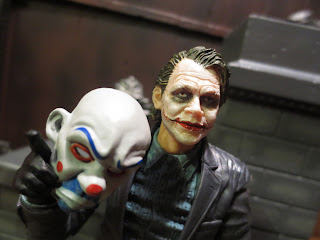