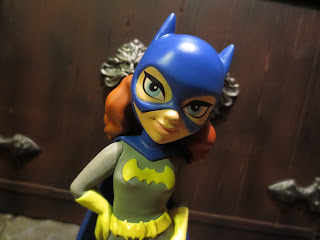 Today I'm checking out a Batgirl figure from a new Funko vinyl line called Rock Candy. Funko calls Rock Candy a "5 inch stylized vinyl figures line" and so far the line encompasses two properties: DC Comics and Barbie. The line reminds me of Vinyl Vixens but in a smaller scale and with more normal proportions. Funko seems to always be putting out something new (and often ditching those new things pretty quickly) and Rock Candy is one of their latest projects. Will it take off like POP! and Dorbz or will it be another flash in the pan like the hideous Vinyl Idols? Only time and the hard earned cash of buyers will tell! That's not going to stop me from giving my opinion, though! Today I'm looking at "Classic Batgirl, the first of two Batgirl figures in this series. Ready for a closer look? Then join me after the break... 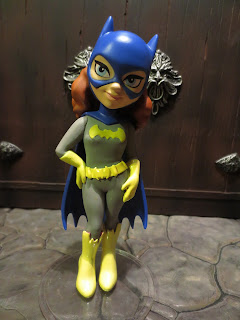 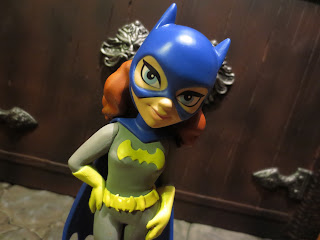 * I really like the look of this line! The style is great as it manages to just have a slightly stylized look without going overboard. This version of Batgirl is heavily influenced by her 1970s look with the great outfit that is seen on so much licensing art. The paintwork on her face is excellent and she has a very cute expression. I'm definitely digging this one. 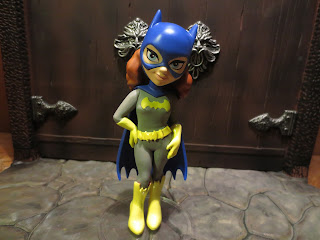 * This is a great Batgirl pose, especially for a 1970s styled Batgirl. It's playful yet still confident and it looks great. The figure is molded in a really solid plastic and I can definitely see the appeal of these. They kind of remind me of a mixture between Vinyl Vixens and Mattel's DC Super Hero Girls (if you can imagine that). 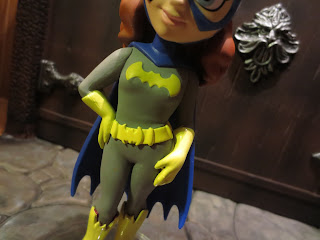 * The paint work overall is quite neat and clean, partially due to the fact that many of the components of Babs' costume appear to be separate elements that have been assembled after production. This gives the figure a bit more presence and helps aid in the sharp contrast between the gray bodysuit and the yellow elements such as the belt and gloves. 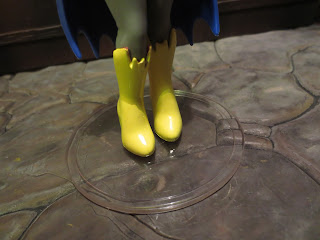 * Batgirl comes with a simple clear plastic stand to help keep her on display. It's nothing fancy but it plugs into her feet securely and keeps her standing straight. Not much more you can ask for in something like this, am I right? 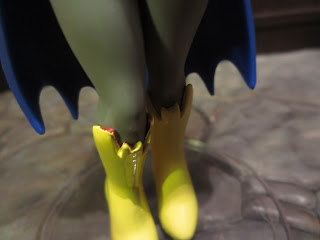 * The tops of Batgirl's boots are...red? Yeah, red. Huh. I guess these boots were molded in red plastic for some reason, which is really odd considering that there are no red parts on this figure at all, and the tops were just not painted quite right. It is a little strange but not insanely noticeable. 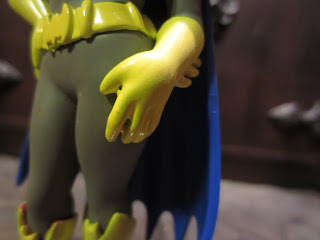 * The gloves on Batgirl's left hand look a little gloppy. I'm not sure if this is due to the plastic not setting right in the mold or due to the paint being applied a bit too heavily but there's definitely some odd bubbly areas and places where too fingers connect. Fortunately these are gloves and not her hands; otherwise you'd wonder if this version of Batgirl was inspired by Danny DeVito's Penguin! 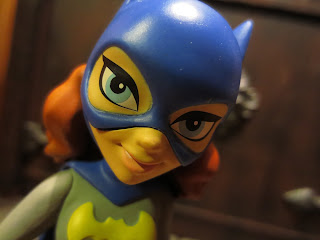 This is really a Good and a 1/2 little statue and the price is just right. For $10 this is a fantastic addition to your desk, office, or collecting room(s). I'd love to see this line continue, including more of the DC Universe, but that really depends on how well these sell. I'm really loving the style of this line and I think it could work really well for male characters as well as female characters. The small size and price point could work to make these as easy to pick up as something like Funko's POP!s. Who knows? All I know is I'm quite happy with this classic depiction of Barbara Gordon and you just might be too.

I've reviewed many, many Batgirl figures, statues, and other items and you can check them out at my virtual Batgirl museum!
Posted by Barbecue17 at 8/12/2016