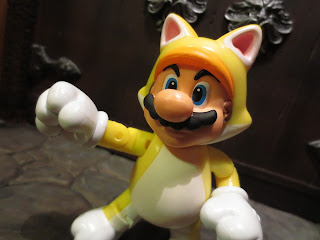 It's been a few months since I last reviewed some World of Nintendo figures and, man, is Jakks cranking these toys out right now! While my series 2-1 figures just showed up in the mail from my Pile of Loot, I actually stumbled across a few series 2-2 figures at my local Wal-Mart this week. That's actually the first time I've seen these ever stocked at a Wal-Mart which seems really good for the health of this line. This is definitely the toyline right now that seems to be defying the odds: Despite hardly anyone seeming to carry it (although that's changing thanks to some exclusives being released at Target, Spencer's, and Wal-Mart), it being difficult to find, and the characters getting more and more obscure, it just keeps trucking along. Cat Mario is a Mario variant from a few of the newer Nintendo games that I honestly just haven't played. The most recent Nintendo system I own is a 2DS so Mario Maker and Super Mario 3D World just haven't been accessible to me. Still, I'm loving this line and picking everything up. Let's check out Mario dressed like a cat, shall we? 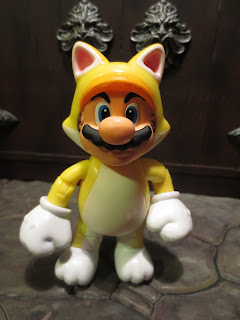 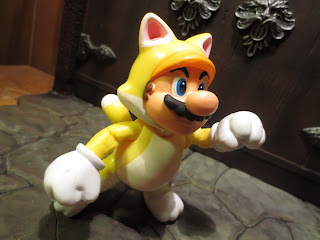 
* While he's not "super articulated" Mario still has a decent amount of articulation. He really can take some cat-like poses an use his ball-jointed tail to help balance him. He's built pretty similarly to Cat Luigi and shares the same arms, legs, hands, tail, and feet. Mario has tighter joints, though. 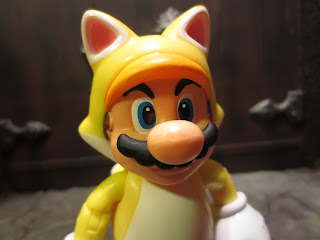 * I love the look of the Mario face poking through the hood of the cat costume (I'm assuming this is a costume and not Mario actually turned into a cat, right?) and the ears on top. Nintendo characters have unusual proportions, varying sizes and body types, and smooth textures, and Jakks does a fantastic job with rendering the designs as three dimensional toys. 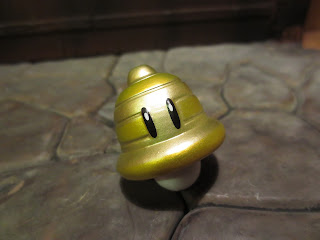 *  Mario comes with the Super Bell (the same as Cat Luigi) which is the special item that lets characters transform into their cat forms. It's a small gold and yellow bell with funny little Nintendo styled eyes, stripes around the waist, and a clapper hanging out the bottom. It's a reused accessory but it makes sense for the character. Plus, it looks really good. 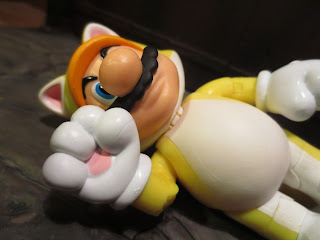 * Aww!!! Look at the paw pads on Mario's paws! He has these on both his hands and feet and they're totally adorbs! I swear, Nintendo gets grown adults to go nuts over silly, goofy stuff like no other company can. I mean, just look at Pokemon GO! Nintendo just has a chunk of a magic star tucked away somewhere or something. 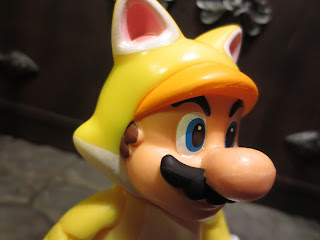 
* My only real complaint with this figure is that some of the paintwork on Mario's hair/ sideburns is a little sloppy. Well, it's really just not fully covered. Otherwise, this guy is just aces. You know, so long as you're interested in Mario in a yellow catsuit. 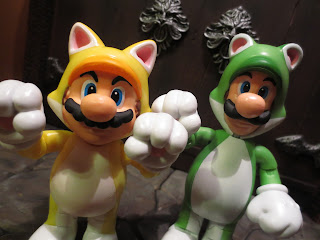 While I'm way more interested in unique characters (I still want a Rosalina, Daisy, Wart, Captain Falcon, Birdo, and Mouser!) or more "vintage" variants (Racoon Mario, darn it!), these modern variants are still pretty cool. I'd love to see more of the cat cast in all honesty, as they're just so unusual. Like Cat Luigi, Cat Mario is a Good and a 1/2 figure. He's not a high point in the line but he's fun, colorful, and helps to make the shelf look a bit more crowded. Now to track down the rest of series 2-2, most importantly Slippy Toad, Princess Zelda, and the Skull Kid! Wish me luck!


I've now reviewed quite a few Mario figures (something I never thought I'd be able to say) including the standard Mario, the classic Fire Mario, the indestructible Gold Mario, and the magical Tanooki Mario. I've reviewed plenty of other heroes and villains in this line, including: