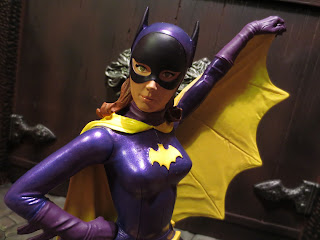 This has not just been a crazy year for Batgirl collectors but specifically a crazy year for merchandise based on Yvonne Craig's Batgirl in the 1960's Batman Classic TV Series. Over the past 7 months I've reviewed four figures from Figures Toy Company, a maquette from Tweeterhead, and a statue from Diamond Select Toys. Today I'm looking at another representation from Diamond Select Toys of Ms. Craig's portrayal of the character in the form of a bust. I can't believe how much product is being put out on the market for the show! It truly speaks to the love fans have for the series, the characters, and the actors portraying them. This Batgirl statue just started shipping near the end of July and represents yet another way to collect the daring denizens and dastardly deviants of Gotham City. Ready for a closer look? Then join me after the break... 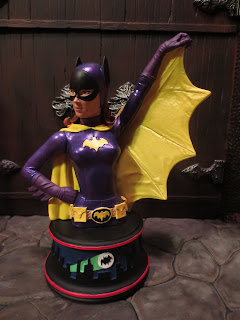 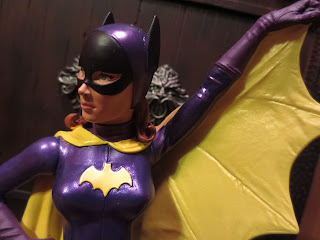 * I really like the composition of this statue. It's a very classic Yvonne Craig as Batgirl pose, particularly the cape being raised up above her head by her left hand. The cape looks great, too, as the sculpted folds and texture of the cape really make this seem like a piece of material and not a statue. 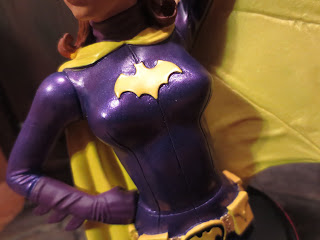 * I really like the look of the costume on this figure. Other than the doll from Tonner, I think this might be the best looking suit on a 1966 Batgirl. While both Diamond and Tweeterhead tried to convey the suit's shininess through adding texture on their statues, this release used a smooth texture and a glossy paint that really captures the look of the costume from the series. I love the svelte, slick look of Babs' costume. 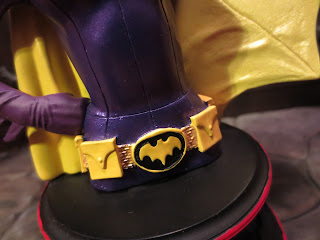 * The paintwork is pretty nice on this one with lots of clean work and nice, even coverage. Batgirl's belt looks great and manages to utilize  a few different shades of yellow and gold to represent her belt. 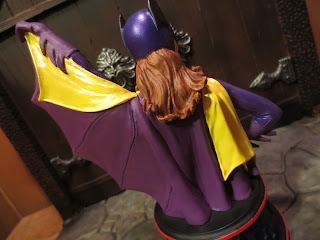 * If you look at the statue from the back you should be pretty pleased. Batgirl's purple and yellow cape looks really nice and drapes realistically along her back. Her hair looks good, too. The sculpt is right and the color choice is pretty solid. While I doubt you'll be displaying this bust backwards, it's nice to know that the bust should look good from almost any angle. 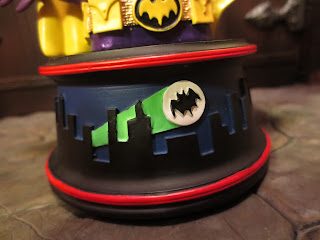 * The base has a rather nice design that captures the funky design sensibilities of the TV series by depicting a silhouette of the Gotham City skyline around the edges. There's also a bright green projection of the Batsymbol, too. The bright colors look great in juxtaposition with the dark skyline and really give this base some excellent shelf presence of it's own. 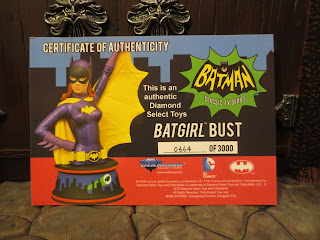 *Diamond Select Toys has included a Certificate of Authenticity with the bust. While I've never been asked to show a certificate of authenticity to prove that one of my statues was authentic, these are a nice little extra to have around. Some people collect these, even. This bust has a run of 3000 and mine is number 364. 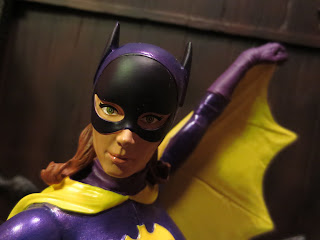 * This isn't a bad sculpt for a Batgirl bust but I'm not really seeing Yvonne Craig's Batgirl in it. Tweeterhead's maquette seems to have done the best job so far in this field but I was hoping that since this was a bust, more attention would be paid to the likeness. Again, this isn't terrible but it looks more like a really, really good Batgirl cosplayer rather than Yvonne Craig. I think the facial expression is kind of off. 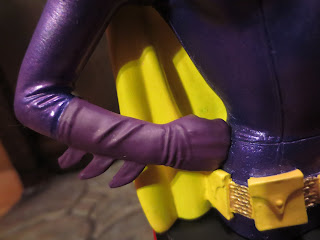 * It took me a bit to notice this but the third spike on Batgirl's right glove seems to be deformed. It doesn't actually seem broken: Just misshapen. 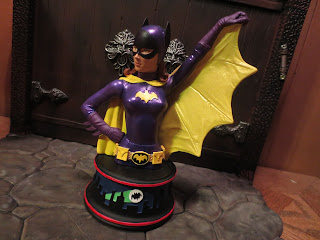 Factoring in the lower price, the limited nature of this statue (way less than most DC Collectibles' statue runs), and the work on the statue itself, I do think this is a Great release. I may have been a bit harsh on the likeness but, thinking about it, there's no way anyone who was in the know could look at this statue and not know who it was. The paint and work on the base also add a lot to the overall product, making this a very nice display piece. While she's not as large and impressive in stature as some of the former releases from this year, Batgirl is an excellent representation of the character. Considering their love for the property, I really hope Diamond works out the rights to do Select action figures of these characters. DC Collectibles seems to have no interest in doing anything and Mattel's line pretty much floundered so it's time for someone new to step up to the plate. Diamond seems like the perfect folks to do it, too.

I have reviewed quite a few different Batgirl products on this site and you can check them all out at my virtual Batgirl museum!
Posted by Barbecue17 at 8/10/2016