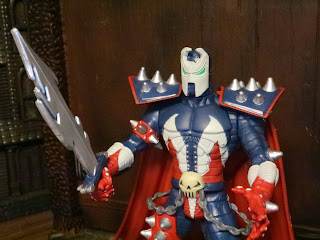 Remember Angela and Cogliostro, the controversial Spawn characters created by both Neil Gaiman and Todd McFarlane that were subject to a long running legal dispute? Well, Medieval Spawn is the third character in that group though he didn't get sold to Marvel. Instead, Sir John of York is still running around in the Spawn Universe. I recently grabbed a few newer Spawn trades and preordered the other upcoming titles, so I'm going to be catching up a bit. This figure isn't new, however, and is part of the original first series of figures from 1994. I never owned Medieval Spawn as a kid but I did buy him for a friend who wanted Spawn figures for his birthday party (I also bought him Tremor) so I got to mess around with him at the party. I recently found Medieval Spawn at Toy Federation in Greer, SC and decided to add him to the collection. He's a pretty significant figure as he's the first Spawn variant, but he's not Al Simmons as Spawn. He's Sir John of York, a knight from the 16th century. The Spawn line is famous for having multiple different versions of Spawn and while some of them are just cool looking variants of Al Simmons, other are completely unique characters. Mandarin Spawn, Raven Spawn, Gunslinger Spawn, Ninja Spawn; all different guys. The way Spawn could be reinterpreted as both different variants and different characters really has contributed to the longevity of the Spawn toyline and it's honestly in large part thanks to Neil Gaiman's writing of Spawn #9. Wild stuff, right? Let's take a look at Medieval Spawn after the break... 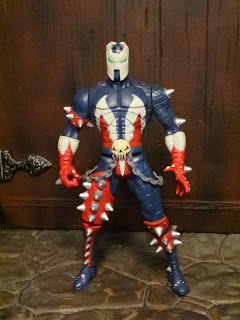 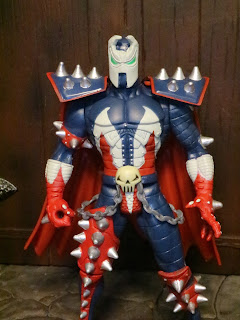 * Medieval Spawn was part of the first series figures and so he's still fairly basic for the time. Cool, sure, but not as wildly sculpted and designed as things to come. He actually nicely captures the look of the character from the comics with a great color scheme of red, white, and blue (go America!). The paint's clean and the sculpted details, especially all of those spikes, definitely look pointy and realistic. Well, more realistic than most other toys at the time. 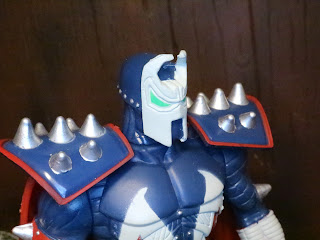 * Medieval Spawn is wearing a more armored looking outfit (presumably still made of necroplasm) and his face looks more like an armored mask or part of a helmet. It's pretty cool, especially the green eyes. 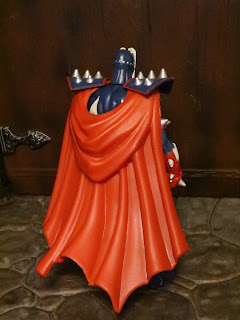 * Medieval Spawn has a hard plastic cape that is sculpted to look somewhat dynamic. It's held in place with some spiked pauldron's that definitely add some menace to his silhouette. 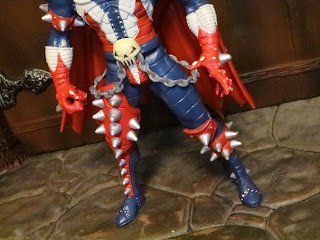 * Check out the cool skull belt buckle with chains and all of the spikes on his legs! Medieval Spawn is also a fan of the Toddy Mac signature asymmetrical footwear look so he's got one leg covered in spikes and armor and the other with just spikes and armor around the knees. Has anyone here ever seen Todd McFarlane in person? Does he tend to wear asymmetrical footwear? Just curious if art imitates life. You know, considering so many other elements of Spawn are from his personal life. 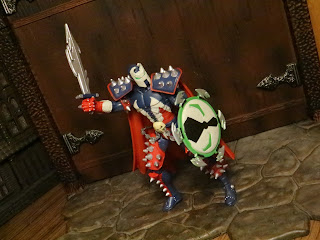 * The articulation on Medieval Spawn is pretty basic, just the basic five with the addition of the hinged knees. He's in a standard pose, though, which usually makes the figure more playable. He feels pretty sturdy and definitely was on par with most figures from the era. 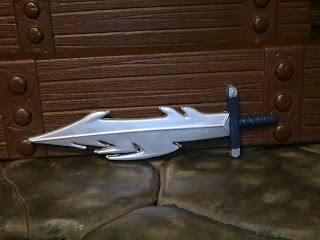 * Medieval Spawn carries a big sword for when he wants to go medieval on someone. It's large, sharp looking, wildly impractical, and rather cool. 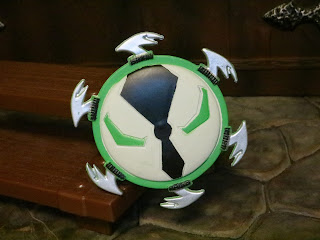 * There's also a shield edged with blades and sporting the Spawn logo on it. It works just like a regular shield though the blades can spin around if you want. There's a handle that also functions as a clip so if you want Sir John to hold the shield in his right hand or clip it over his left arm, you can. 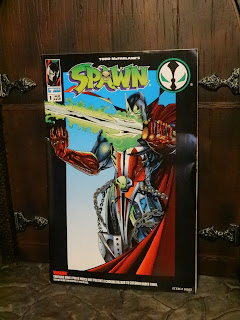 * The first series Spawn figures came with a full issue of the comic. That was a pretty nice bonus! 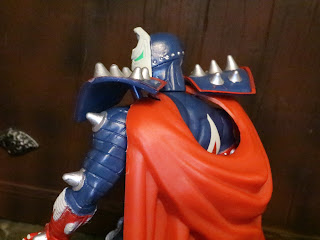 The Negatives:
* The cape is held on by the pauldrons but it does tend to slip off quite easily and the pauldrons can pop out, too. The cape and pauldrons are cool looking, sure, but they definitely get in the way of the playability of the figure. 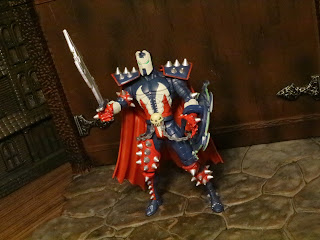 Medieval Spawn is a very classic figure that is was more significant to our great hobby than most people probably give him credit for. He's a pretty cool figure and while he seems pretty basic today, he was pretty rocking back in 1994. He was definitely taller, more well detailed, and just cooler than a lot of the other superhero figures out on shelves. I'm excitedly awaiting the release of a new Medieval Spawn in the modern Spawn line since he's back in the comics, plus he's just a rather popular character. He's a Great and a 1/2 figure and definitely a classic of the 1990s.


While this is the first figure of Medieval Spawn/ Sir John of York, I've reviewed plenty of other versions of Spawn:  From Al Simmons, the classic Spawn, I've reviewed the classic Commando Spawn and Nuclear Spawn, the movie based Burnt Spawn and standard Spawn, the Mortal Kombat 11 Malefik Spawn (Bloody Disciple) and Spawn (Bloody), and the modern Spawn with throne, for Chenglei, there's the modern Mandarin Spawn Deluxe, and the still mysterious Ninja Spawn from the modern line.