Action Figure Review: Beast Man from He-Man and the Masters of the Universe by Mattel 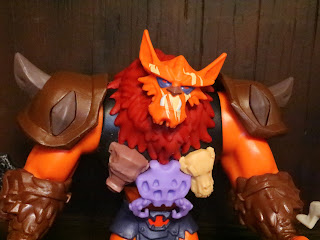 The Netflix CG series Beast Man has been out for a few months now but I just got mine in the mail a week or so ago. With Beast Man's arrival I now have all of the Dark Masters from the first 2 "seasons" of He-Man and the Masters of the Universe, which is pretty cool. It's always nice to have a team completed. The toys for this line keep trickling out and while they're a mixed bag, Beast Man is definitely one of the better ones. Prior to being transformed into Beast Man through Skeletor's havoc magic, Beast Man is known as R'Qazz. He's a fearsome hunter with a long history of tormenting the Tiger Tribe and forcing animals to fight in the pits. R'Qazz actually wears Cringer's claws on a necklace. Brutal! This version of Beast Man has a fantastic, animalistic look to him. He's clearly Beast Man thanks to his color scheme but there are some cool, unique details on the figure that make him really fun. He's sold as one of the deluxe figures in more open packaging, like Grayskull Armor He-Man, so he's a bit bulkier than your average figure from the 5.5 inch line. Let's take a look at Beast Man after the break... 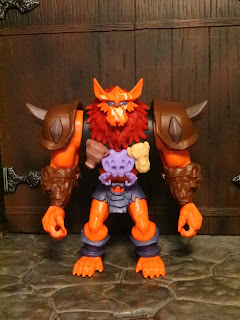 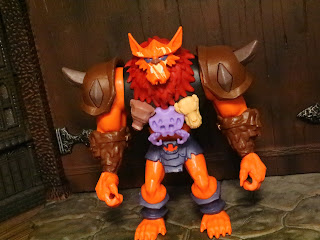 The Positives:
* Beast Man's design in the Netflix series is very recognizable as Beast Man but with some exaggerated features like larger shoulder spikes, longer arms, and a menagerie of skulls worn around his neck. There's not a ton of paintwork on the figure and most of the colors are accomplished simply through the colors of the plastics chosen. Beast Man is bright orange and really stands out nicely among the rest of the Evil Warriors/ Dark Masters. 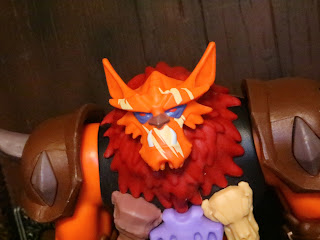 * I love Beast Man's head! It's simple, yeah, but it's very dog-like. The way the ears are standing up reminds me of one of our dogs, so that has sold me right away. Beast Man has some painted on facial tattoos and scars along with some little, point teeth. He's also rocking his furry collar. the stylistic design reminds me of something from The Legend of Zelda: The Wind Waker; it's fearsome, but very animated looking. 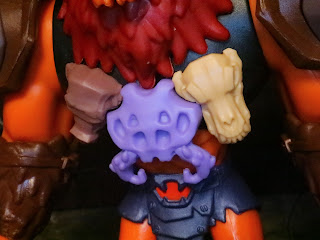 * The skulls hanging on Beast Man's chest are really cool. It's just a fun little extra detail that further helps this version of Beast Man to distinguish himself from all the others out there. 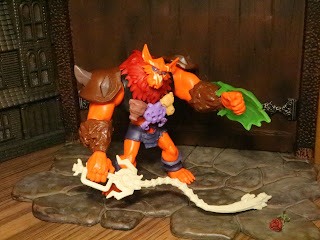 * Beastie Boy here is articulated similarly to most other figures in the line but given swivel/hinge shoulders. Mix that in with the Power Attack feature and he's pretty fun to mess  around with. I imagine most kids into action figures would have a lot fun with him without having to worry about any weak or broken joints. He's colorful, creepy, and has some cool accessories with him. 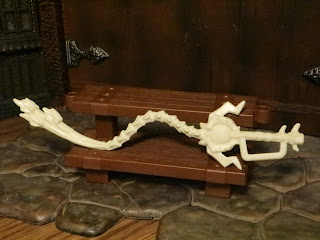 * Beast Man's whip is pretty cool here. Rather than a traditional leather whip like every other Beast Man figure, this animated version has a whip that's made from bones. That's pretty nightmarish, right? It looks like something the Skeleton Warriors might have used. 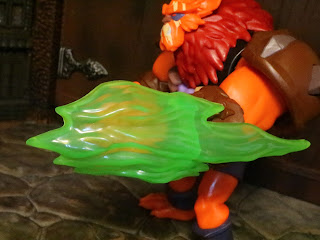 * Beast Man also comes with a green energy effect that fits over his wrist. I'm guessing this is to represent the energy or poison or whatever from the spiked gauntlet he usually wears on his knuckles, right? 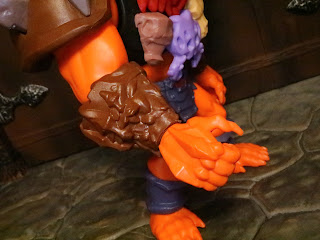 * There are some really cool details on Beast Man's forearms...

*...but he definitely could have used a paint application or two to really bring them out, especially the spikes weapons on his hands. 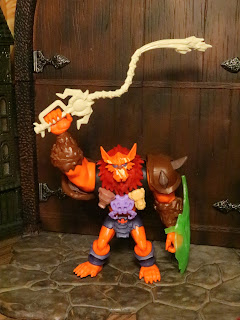 Beast Man is really quite a cool figure. Not an action figure of the year or anything but definitely a well done interpretation of one of the most prominent Masters of the Universe characters out there. Seriously; Beast Man shows up in nearly every MOTU line except for He-Man/ New Adventures. This is a fun figure with some cool details and excellent accessories. The only thing I would have liked to have seen would be some additional paint applications to highlight the sculpted details. Otherwise, this is quite a fun figure. I'm not seeing too many figures from this line languishing on shelves or anything so I'm assuming it's doing OK. There are some new figures showing up in the 5.5 inch line currently like Tri-Klops, Mo'squita'ra, and Stratos, and Sorceress with a Cosmic Falcon. Beast Man gets a Great rating from me and is one of my favorite figures from this line. The fact that his ears look like the ears of my dog don't hurt, either. She's much cuter than Beast Man, too. And smarter.