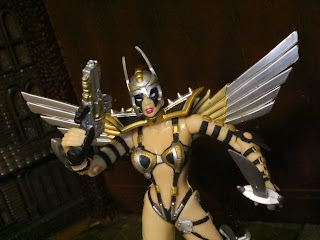 Angela was a huge part of the popularity of Spawn, both the comic and the toyline, in the mid 1990s. Created by Neil Gaiman and Todd McFarlane (with about two decades or more of craziness regarding who owns the character), Angela became an important character in the comics and a high desirable action figure. Angela first appeared in series 2 of the toyline and was so popular that she was given a variant in series 3: Cosmic Angela. That's the version I'm checking out today! I went to Toy Federation in Greer, SC a couple weeks ago and picked up some vintage Spawn toys to review and display with my newer stuff. Sadly, we won't get a modern Mcfarlane Angela figure because today Angela is part of the Marvel Universe. This figure is from back when she was one of the A-listers at Image, though. I'm not sure if this costume was made up for the toyline (I've read the first 100 issues of Spawn and the Angela miniseries and I don't recall it), but I really like it. This is a cool looking figure with neat accessories and lots of weird problems. Many of McFarlane Toys' early releases really tried to do some impressive things and while they usually succeeded, they struck out a few times, too. Is Cosmic Angela a hit or a miss? Let's find out after the break... 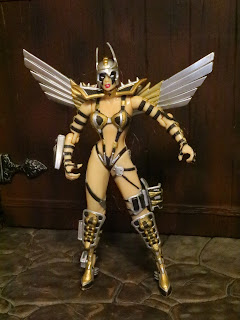 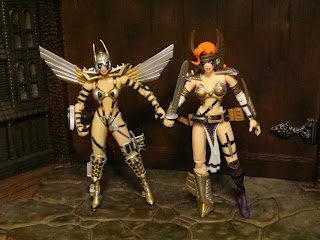 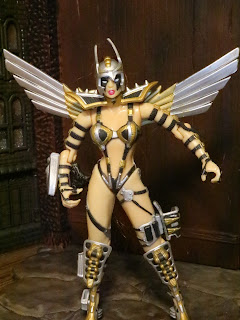 The Positives:
* That is a wild outfit with all kinds of straps and armored bits. Angela is showing a lot of skin but probably not as much as you think due to how everything is laid out. The sculpt is pretty impressive, especially considering this is a toy from 1995 that was sold on the shelves at places like Walmart and Target. The paintwork is overall really clean as well with a great black, silver, and gold color scheme. I love the blend of sci-fi and fantasy here. It reminds me of something from the Barsoom stories of Edgar Rice Burroughs or a late 1970s/ 1980s sci-fi fantasy film. 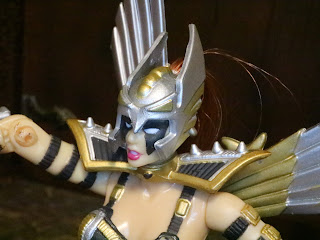 * Angela's headsculpt isn't as nice as the first version of the character but it's still pretty solid. The non-removable helmet is the big draw here, though. The wings on the side are super cool.

* While the first Angela figure had sculpted hair, this version actually has rooted hair. It's an interesting choice and it doesn't look too bad at all. It was probably done so that the wings could still maintain their articulation, as sculpted hair would interfere with the design. 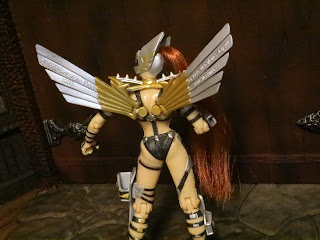 * Speaking of articulated wings, here's a look at Angela's articulated wings. They're pretty neat with swivel/hinge joints at the base. There's a great range of motion here and the wings are fun to fool around with. 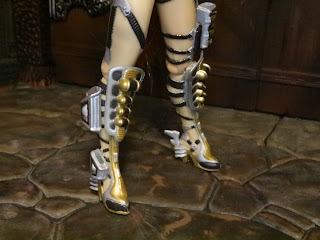 * Cosmic Angela of course has those patented asymmetrical boots with lots of padding, cool high heeled boots that offer about as much coverage as the rest of her outfit, and little lightning bolt shaped wings on the back. 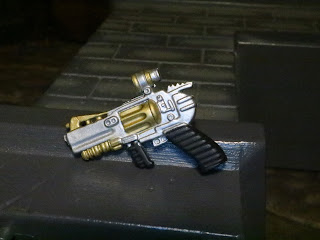 * Cosmic Angela's weapons are less cumbersome and more compact than the weapons included with the standard figure, and first up is a pretty serious looking revolver. This thing is beautiful with a huge cylinder, a small forward grip, a short scope, and quite a bit of sculpted detail and paintwork. 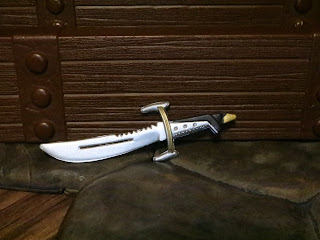 * She also includes a long knife, or a short sword, depending on how you look at it, I guess. It's a cool, curved blade with a vibe that's very fantasy inspired with just a but if a futuristic pace feel to it. It's even sporting a small blade/ skull cracker in the hilt. 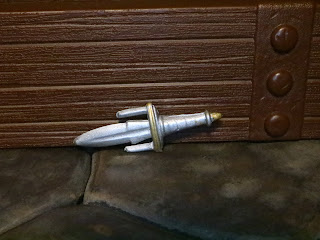 * Cosmic Angela's third weapon is a small dagger. It's well designed and definitely looks like something you could buy at one of those shops in Gatlingburg, TN or at your local mall that sells statues of wizards, CBD products, and ninja gear. 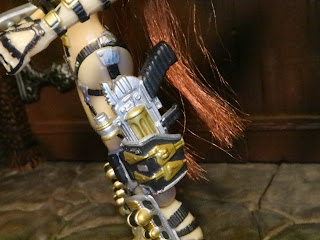 * Angela has a place to store all three of her weapons. Her revolver fits in the large holster on her left hip. It's a not a perfect fit but it does stay in there securely. 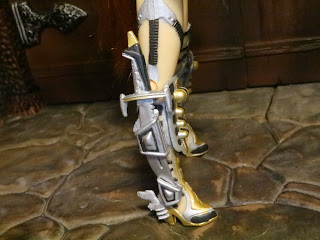 * The short sword fits into a small sheathe on Angela's right shin with the point of the blade fitting into a spot on her right ankle. It does cause the blade to bend a little but it looks pretty cool and stays in place. 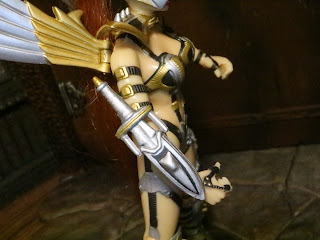 * Lastly, the small dagger stores securely on a sheath on Angela's right forearm. It's at the ready and easily accessible. 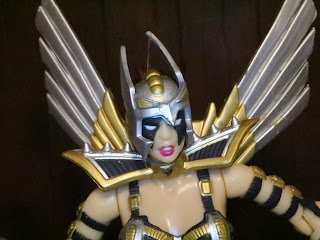 
* Cosmic Angela is, unfortunately, a very flawed figure. She's a very cool figure but for every plus, it also feels like there's a minus. First up is her helmet: On mine, it's clearly glued on incorrectly. It's not straight and looks really wonky in person. I'm sure this isn't a widespread issue but it does affect mine. 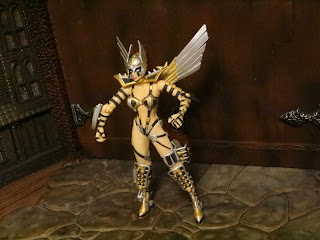 * Cosmic Angela might look pretty nice but her articulation isn't the best. It's pretty stiff. I'm not judging her by the standards of a modern figure, by the way; she's definitely a 27 year old action figure. She's just stiff, though, and feels like something that would be tough to really play around with. At this point in time McFarlane's Spawn figures were still definitely designed and marketed like toys, but her stiff joints, v-crotch, and awkward elbows and knees make her less fun than most of the other Spawn figures. Angela's definitely more about the visual here. 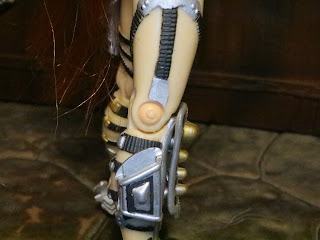 * The knee joints on Angela are really weird looking, too. They're bizarre, like some sort of growths on her knees. The elbow joints are nicely hidden but the knee joints are a real eyesore. 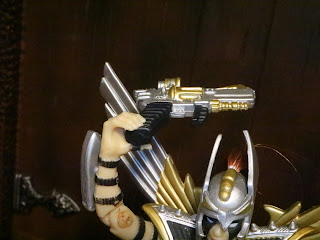 * Cosmic Angela has one of the coolest guns in the Spawn line. It's a real shame that she can't hold it properly. Seriously, the pistol grip is much larger than her hand and there's no way you're getting this in her hands without damaging them. What a bummer. 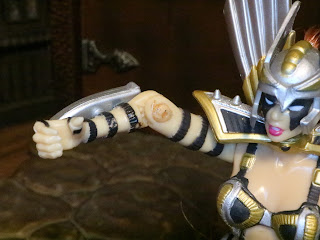 * The elbow joints are just weird and unsettling, though. I mean... what exactly is going on here? They look odd, can bend backwards, and just look strange with the large pegs and a gap that's just too big. Yikes. 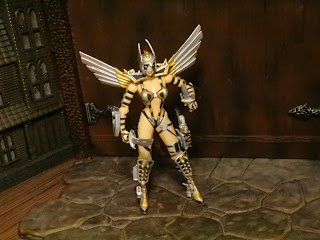 When you swing all the time you definitely score some hits but some strike outs, too. Cosmic Angela isn't a complete strike out but she definitely has some design elements that don't work as well as you'd hope. McFarlane definitely tried to do some impressive things here as Cosmic Angela is a rather slick looking figure with swivel/hinged wings, rooted hair, and functional holsters/ sheaths for all of her weapons. There are definitely elements that don't work, though, like the stiff, odd articulation and the misaligned helmet. When weighing the good and the bad, she ends up with a Good rating. That's an average review and she's definitely an average figure in the Spawn line. Not bad but maybe a bit disappointing. It's a shame we can't expect any version of Angela or probably even Tiffany in the new Spawn line, huh?


If you're interested in more of Angela I've also reviewed the Marvel Legends Series Angela.