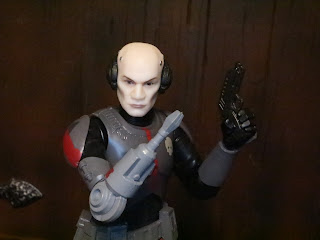 Hasbro staggered the release of the Bad Batch members with Echo and Omega being the last to show up. I'm not currently planning to pick up Omega at the moment as I'm getting rather particular with my Black Series purchases but Echo was a must have. I love the look of the guys of Clone Force 99 and bring Echo back into the story as part of the team was a fantastic idea. While Tech is the, you know, the Tech guy, Echo is more like a human-droid hybrid, so he kind of offers up a separate set of skills. He's legitimately a cyborg thanks to the evil machinations of Wat Tambor, Admiral Trench, and their Separatist lackeys. While the Black Series has been filled with repaints lately, CT-1409 shows what Hasbro can do when they build a figure from the ground up. He's incredible. I missed out on the Target Clone Wars figures but I'm glad to at least have tracked down this version of Echo. Let's check him out after the break... 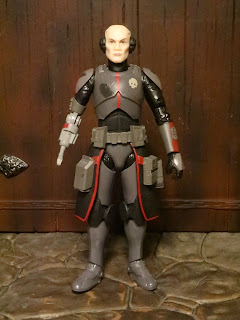 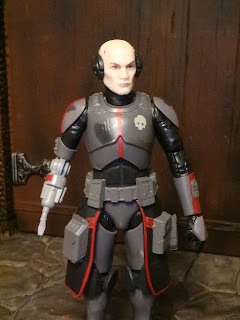 The Positives:
* Like the rest of the team, Echo is wearing heavily modified and personalized Clone Trooper armor. His is specifically based on the ARC Trooper armor which he wore after being promoted in the 501st. Of course, Clone Force 99 tends to modify and decorate their armor differently, so he's wearing gray and black with red highlights. He's also sporting some scuffs, burns, and damage, as well as a cool skull logo on his left chest. 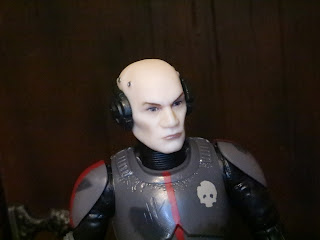 * While Echo is a clone of Jango Fett, his time in captivity has caused his skin to become pale, almost whitish, and he's way thinner than the rest of the clones. He looks rather unhealthy. The paintwork is excellent, though, and looks better in person. His eyes look deep and sunken in while his cheeks have a grayish pallor to them. 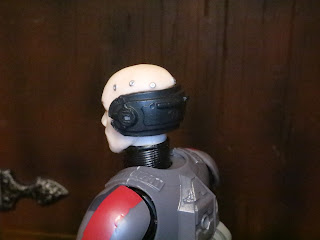 * He's wearing a cybernetic headpiece, like Lobot, which helps him to control all of his modifications. He's also sporting lots of ports in his head from the modifications performed on him by the Separatists. I love Echo but he definitely makes me want a Lobot in the Black Series. 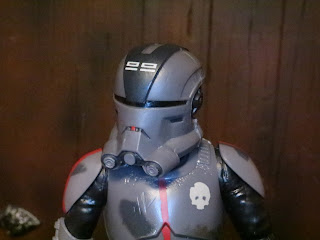 * Echo comes with a helmet like the rest of his Clone Force 99 brethren. It looks fantastic and attaches around his head. There's a cutout in the back for his cybernetic headgear and a tab that snaps underneath the headgear to keep things on securely. 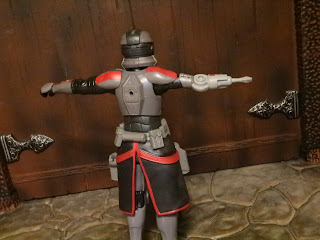 * Here's a look at the back of Echo to show off his kama, the gear on his belt, and the excellent and flexible shoulder pads he's wearing. 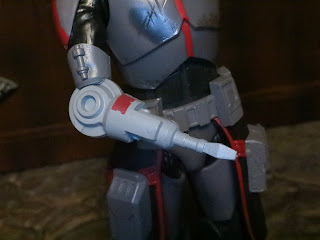 * Echo no longer has his right arm. Instead, it has been replaced with a scomp link. This guy is his own astromech! Seriously, though, it's a pretty neat feature on the figure and sets Echo apart from most other Black Series figures. 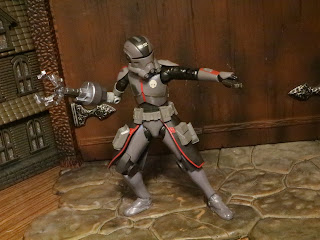 * Echo is fully sporting the newer articulation scheme with fantastic swivel/ hinge joints on his elbows and knees and the lateral "butterfly" shoulders. He's really fun to pose, particularly because of his crazy gear and his super smooth joints. He's as durable as the real Echo, too. That guy is one of the toughest Clone Troopers around. 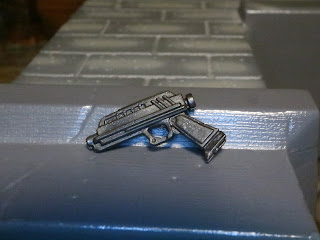 *  Echo comes equipped with a DC-17 hand blaster from his ARC Trooper days. It's an excellent sculpt (one we've seen many times before) that works well with the character although he doesn't have a trigger finger. 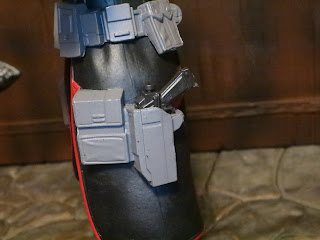 * The DC-17 fits perfectly into the holster on Echo's left hip. 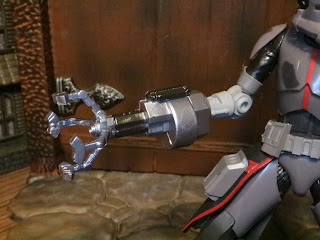 * Echo comes with a 2-piece claw arm that attaches over his scomp link. It's pretty neat as the claw is decently sized and has four arms on it. It's a detailed sculpt with some paint applications, too, and something that further sets Echo apart from Tech. 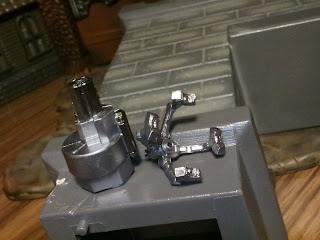 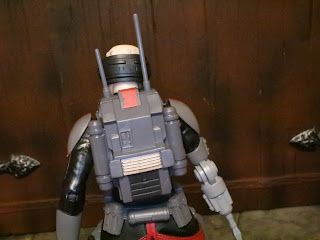 * Echo also comes with an excellent backpack. Lots of sculpted details an antennae and even a few paint applications. It plugs in and stays on securely. 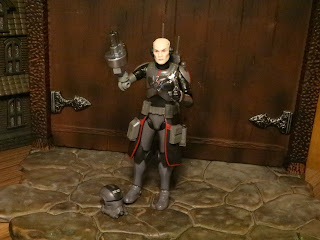