Utensil Review: Sword of Power Spoon from He-Man and the Masters of the Universe by Sonic/ C3 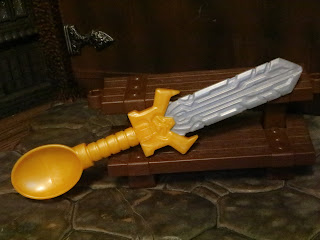 The recent Sonic Wacky Pack kids meal promotion is based on Netflix's He-Man and the Masters of the Universe, the CGI series that debuted last year. The kids meal prizes for this set are three figures (He-Man, Skeletor, and Sorceress) and three spoons (Sword of Power, Havoc Staff, and the Sorceress' Magic Staff), so you've either got something to play with or something to eat with. Since I just reviewed He-Man, let's take a look at the utensil version of his Power Sword (which this show calls the Sword of Grayskull). My daughter recently discovered a color changing Trix rabbit spoon at my parents' house and has insisted on eating with it whenever she ear there. It got me thinking about fun utensils and cereal box prizes, like the Jurassic Park: The Lost World chomping dinosaur spoons from 1997. Remember those? This Power Sword spoon is kind of crazy because it sort of doubles as a butter knife, too. Nifty, right? Let's check this one out after the break... 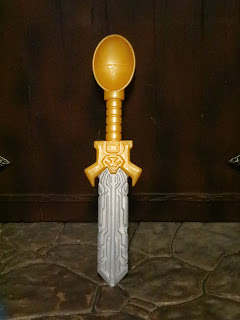 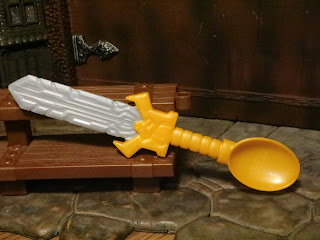 The Positives:
* It's a spoon shaped like He-Man Sword of Power. Or a Sword of Power that also functions as a spoon. Take your pick. it's cool lookin, though, and if you ignore the spoon end it's a pretty nice replica of the sword from the cartoon. It's very animated and colorful, sure, but so is the show. The spoon also has the MOTU logo inside the bowl so you know you're eating with Masters power. 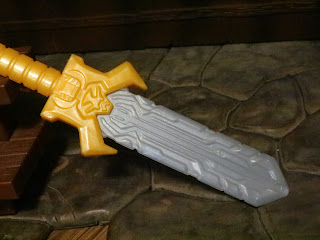 * The blade does look really cool on this. I like the Power Sword from this series and C3, the company that designs and makes the toys for Sonic, did a nice job of capturing it's likeness here. Plus, you could probably use this to cut your chili dog or something if you needed to. 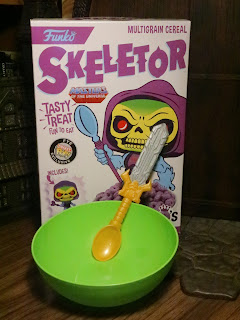 I love silly stuff like this, especially when it's Masters of the Universe related. I now own lightsaber chopsticks and a Power Sword spoon. They really go well with my Episode 1 Darth Maul soap dispenser and Pod Racer soap dish, and my Han Solo and Greedo salt and pepper dispensers. Heck, I'll put out my Geeki Tiki mugs for maximum kitsch. This is a neat little trinket that gets a Good rating from me. It's fun and worth tracking down simply to have it as part of your collection if you like weird MOTU stuff. Who needs a vintage Scare Glow, a Icon Heroes Castle Grayskull,or the latest Tweeterhead release? You have a cereal spoon shaped like He-Man's sword. Dig in.
If you're looking for just the Power Sword I did review the 1989 Power Sword from the He-Man/ New Adventures line, the Power Sword toy from the Netflix He-Man series, and the standard factory Entertainment scaled Power Sword and Power Sword (Chromatic Variant). Of course, most He-Man figures in my Fabulous Secret Powers archive also have Power Sword accessories included with them, too.

For more toys from Sonic's He-Man and the Masters of the Universe promotion check out the following:
He-Man
Posted by Barbecue17 at 6/09/2022