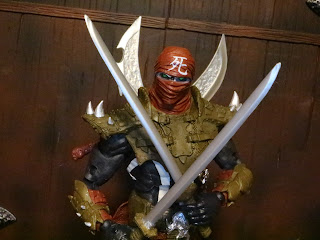 Action figure toylines of the 1980s and 1990s were obsessed with ninjas. While it was legally mandated that every toyline had at least one ninja appear (Ninjor, Snake Eyes, Storm Shadow, White & Black Dragon Ninjas, Nightstick, Space Sumo), some companies just straight up released ninja based toylines. Think of lines like TMNT, Secret of the Ninja, and Chuck Norris and the Karate Kommandos. By the 1990s, the main characters were getting into the ninja game. Batman was a ninja. The Shadow was a ninja. G.I. Joe had Ninja Force. The Power Rangers became ninjas, so they were kind of double ninjas, I guess. And Spawn was a ninja. Well... kind of. The cool thing about many of the Spawn variants is that they're not actually Al Simmons, the guy most folks think of when they think of Spawn. They're often different individuals through history who have become Hellspawn. The vintage Ninja Spawn (released in 1995) was an unnamed man who lived centuries ago in Japan. This new version is also mysterious and has only appeared in the comics recently. Is this the same Ninja Spawn as the previous version? There was a Ninja Spawn 2 in 2006 which this figure seems to borrow more design elements from. Ninja Spawn's identity might still be secret but it's a cool looking figure so we can still go ahead and give him a review. Let's check out Ninja Spawn after the break... 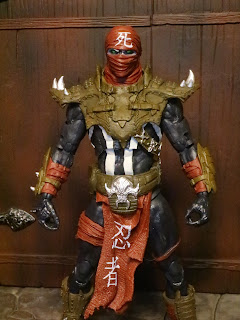 The Positives:
* Ninja Spawn keeps the traditional Spawn colors of red, black, and white but does add in some brown for his leather armor. This is a very different look from the original figure and it has a decidedly different feel to it. I like it, though. It's a cool outfit for a warrior that just seems unique and a bit more natural than just trying to take Spawn's design and merge it with a typical ninja aesthetic. The standard Spawn body design looks great, of course, but it's the leather chest armor and belt that really make this guy stand out. 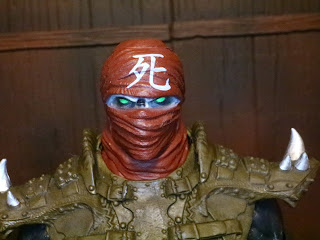 * The portrait is very cool and rather creepy. While only a bit of Ninja Spawn's face is visible beneath his wrapped hood, what we can see looks pretty awesome. I love the green glowing eyes. The paint gives them an excellent glowing effect, as if they're glowing and just slightly lighting up what's visible through the slit in the hood. There's also the kanji character for "death" on his hood. Pretty intimidating stuff! 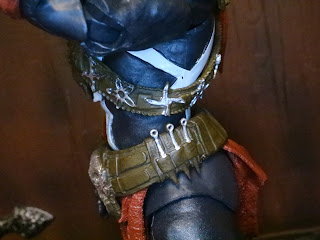 * On Ninja Spawn's left side he's packing lots of little kunai and shuriken. These are so small that they're not removable but they do look pretty nice with detail sculpts and impressive paintwork for the scale. 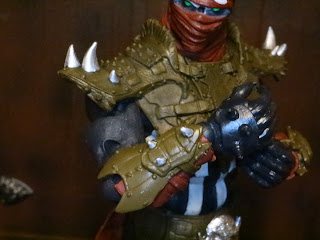 * He's also packing some spiked bracers so he can defend himself more easily and deal some wicked, life ending backhand slaps. 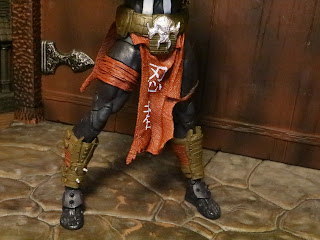 * Not only is he sporting cool bracers on his legs but his loincloth also has some kanji characters on it. It says ninja on it from what my incredibly limited kanji skills tell me. The detail on the "blowing" cloth is great with a nice texture and a sculpt that looks to capture the movement of the material. 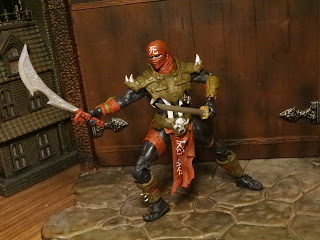 * Ninja Spawn has the same excellent articulation scheme as most other standard figures in this line and the same high quality plastic. These guys feel just as solid and durable as anything out there. Ninja Spawn is really fun to mess around with pose, particularly using his multiple swords. I find myself picking him up pretty often to try new poses. 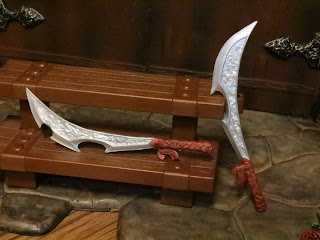 * Ninja Spawn has a few decent accessories with him. First up let's take a look at his scimitar like blades. Great detail in the decorative blade and the plastic quality feels right; not brittle but not too rubbery, either. They're different molds with the ribbon on the hilt hanging on different sides and different cut outs on the edge of the blade. Yeah, those are completely impractical but they sure do look cool. 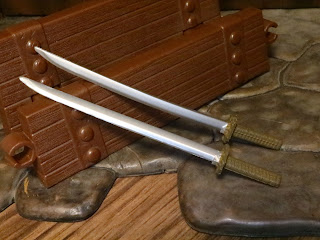 * Next up are some standard swords that I believe are ninjato. Straight, sharp, and made of metal. The blades are basic (as they should be) and the handles are simple. 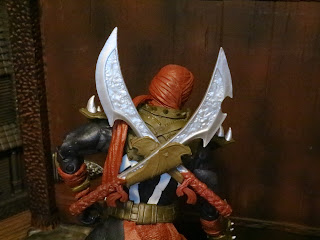 * Ninja Spawn has a removable backpack piece that can hold two of his swords. It really seems to be designed to hold the scimitar but the ninjato can fit in the sheaths as well. It's not as practical as a more standard sheath but it works for the massive scimitar like swords and looks pretty cool. The blades sticking up behind his back give Ninja Spawn an interesting silhouette on the shelf. 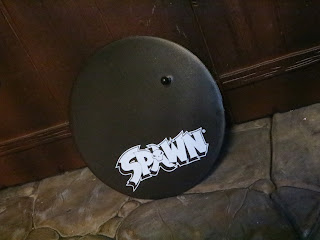 * Ninja Spawn comes with the same basis disc stand as the rest of the figures in the line. 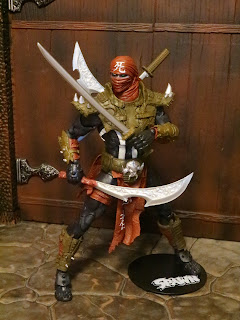 Ninja Spawn is a really well done figure that definitely gets an Epic rating from me. Fabulous articulation, an excellent sculpt with a very impressive portrait (well, what you can see of it), and four nice swords make for a very cool, very playable figure. I'm absolutely loving the modern Spawn line and McFarlane Toys' focus on articulation and durability. These guys not only look amazing but you can really pick them up and pose them without any fear of breakage. Ninja Spawn has a fantastic design and adds another cool Spawn to the collection. I never owned the vintage Ninja Spawn figures so I was quite excited to get this one. Mixing two cool things together here just makes for something even cooler. What vintage Spawn figures would you like to see revisited in the modern line?
Looking for more of Spawn? This is the first figure of the unnamed Ninja Spawn I've reviewed but for Al Simmons' Spawn I've also reviewed the vintage Commando Spawn, the movie based Burnt Spawn and standard Spawn, the Mortal Kombat 11 Malefik Spawn (Bloody Disciple) and Spawn (Bloody), the modern Spawn with throne, and for Chenglei, the Scarlet Edge, I've also reviewed the modern Mandarin Spawn Deluxe.
For more Spawn reviews check out the following:
The Clown
The Clown (Bloody)
Cy-Gor
The Dark Redeemer
Mandarin Spawn Deluxe
Overtkill
She-Spawn
Soul Crusher
Spawn (Deluxe Set)
The Violator (Bloody)
Posted by Barbecue17 at 5/26/2022