Statue Review: Teela (Tweeterhead Exclusive) from Masters of the Universe Legends by Tweeterhead 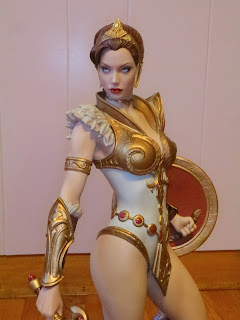 I don't collect many statues these days but I definitely have been keeping up with Tweeterhead's Masters of the Universe Legends line of 1/5th scale statuees/maquettes. They're a continuation of Sideshow's line of MOTU statues from 3-5 years back and continue the tradition of providing amazing versions of the characters that are incredibly familiar yet which also still feel like they're bringing something new and unique to the table. Teela is the most recent release and she just started shipping out over the past couple of weeks. Like with most of Tweeterhead's statues, there is a standard version and a Tweeterhead Exclusive version. The Tweeterhead exclusive version comes with an additional right arm holding the Staff of Ka, Teela's classic snake staff that resembles the Nehushtan or the Rod of Asclepius. Teela has always been one of my favorite MOTU characters and was quite possibly the first female action figure I owned. She's definitely one of the A-list MOTU characters and I'm thrilled that Tweeterhead got to her so soon. She's an incredible statue, so let's check her out a bit more closely after the break... 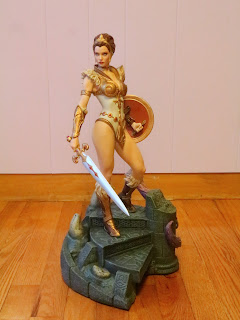 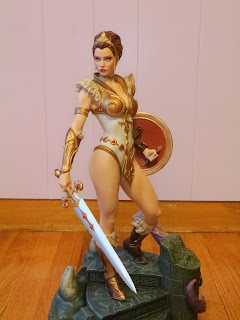 * The way I've always thought about this line of statues from Sideshow and Tweeterhead is that these would be the character designs/ costumes from a near perfect (and, of course, nonexistent) Masters of the Universe movie. Can you imagine if we got a film and this is what Teela actually looked like? Rather than sticking completely to one previous source (vintage toy, animation, etc.), Tweeterhead's design for Teela draws from multiple sources to create an ideal version of the character. Her stance is great; she's depicted cautiously walking down a staircase in the depths of Castle Grayskull, looking to the right for some as yet unknown danger. Having Teela standing on two different levels does add a subtle bit of motion to the statue and makes for a more interesting pose while still having her neutral enough to easily appreciate the costume, sculpt, and aesthetics of the piece. 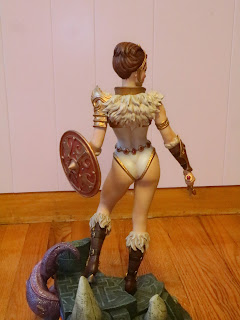 * Here's a shot from the back so you can see the back of her outfit and her shield. The statue ships in multiple pieces. The legs and torso are all one piece while the arms and head are separate (they're held on via magnets). The fur collar on the back of Teela's outfit is also a separate piece. She fits easily and securely into the base which is a huge piece. More on that in a moment, though. 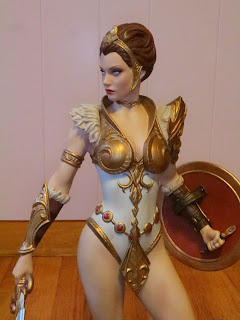 * Teela looks fantastic, a perfect rendition of the Warrior Goddess of Eternia. Tweeterhead released a bust of Teela back in 2016 but this design isn't just a retread of that previous piece. Teela looks a bit more armored here. Not crazy armored, as this is still a fantasy based statue and not something trying to replicate real world armor, bit she definitely has more metal on her outfit than most other versions of Teela. It's incredibly well designed and eye-catching without being overdesigned. It doesn't feel like there are costume elements added just for the sake of adding them, you know? Teela looks incredible; graceful and attractive while also showing a warrior's bearing. She looks like she could spring into combat at a moment's notice if need be. 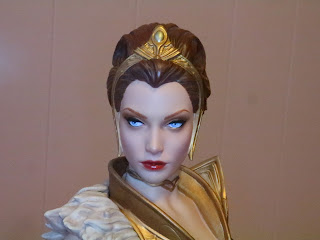 * Teela comes with two headsculpts that can swap out easily. The first one is a more classic rendition of Teela. She's gorgeous with a face that seems very inspired by the Filmation depiction of the character. I love how she's scanning the room with her eyes, too. It's an interesting look that definitely shows that she's preparing herself for whatever is about to go down. And, knowing Teela, she's already pretty confident she's going to come out victorious. 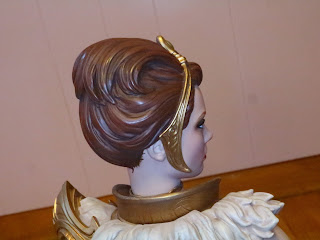 * The hair on this sculpt is shorter, or at least worn up, like the classic toy and Filmation versions of the character. It's nicely designed with a deep auburn color to it. 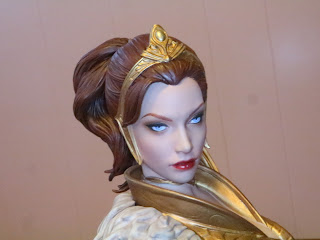 * The second portrait features a slightly different hairdo and headsculpt. Overall, the face looks pretty similar (I'm showing it from a different angle, but the eyes are scanning to the right on this portrait, too) but the way a couple strands of hair fall down on her brown definitely change things up a bit. Also, I like her tiara. It's nicely designed and hangs down the sides of her jaw, almost like it could offer her a bit of protection in battle. 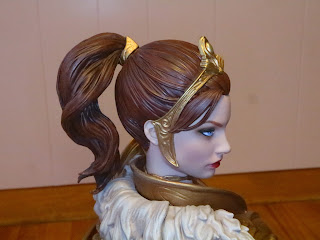 * And here's a look at the hair on this Teela sculpt. Here's she's sporting a ponytail, similar to the 200x version of Teela. I really like the look of this hairstyle on Teela, possibly even better than the classic look. I just personally see Teela taking that much time to do her hair every morning, so a messy ponytail suits her quite well. 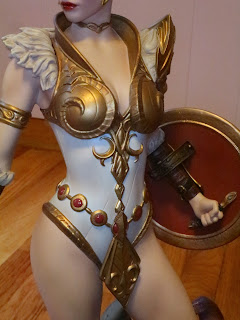 * Teela's outfit is definitely more than just a leotard here. The white part of the outfit resembles a material different than spandex or fabric as it has piping or grooves of some kind on the front. I'm not exactly what you'd call it or what this material would be on Eternia. Some sort of very thin leather, maybe? The upper portion that covers her bust is clearly metal and it looks like it goes all the way around her neck. Underneath the shoulders and neck is some fur that juts around and wraps around the back, providing some more coverage and comfort. The paint work is excellent here and I didn't detect any slop or errant paint marks. 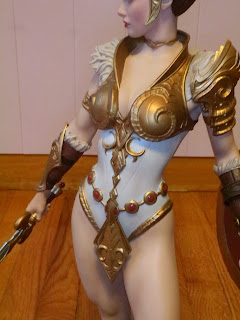 * The gold colors chosen here look fantastic with the white for the outfit's base. There's a bit of red along the belt, too, to give things an extra splash of color. 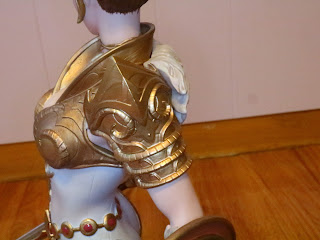 * Teela's left shoulder is protected by an armored pauldron. She only wears one (just like her father most of the time!) and it's a rather ornate piece with some fantastic sculpted detail. 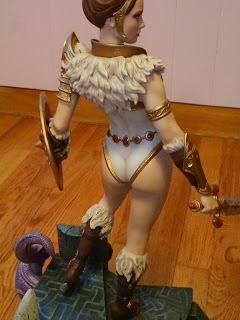 * Here's a look at the back of the outfit and the furry "collar" Teela is sporting. Again, it's a separate piece in the box though there's really no way to display the statue without the collar. It's shipped separately for the safety of the statue but it's not an optional extra look or anything. 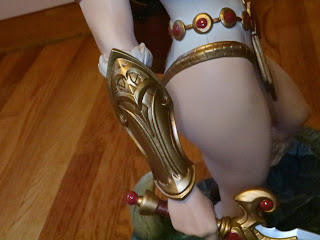 * Teela's bracers are pretty cool as well. Very clean and sleek with some beautiful engraved detail. 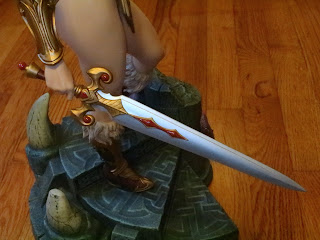 * The standard version of the statue only comes with one right arm and it's this one with Teela wielding a sword. There are elements of the Filmation and 200x swords in the design. The sword feels incredibly; very heavy and sharp. It's a great design and it's actually my preferred look for the statue. 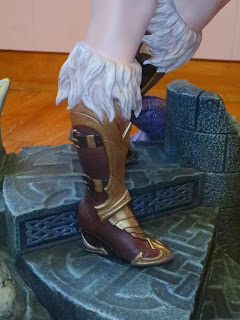 * Like her outfit, Teela's boots are a mixture of a practical material (leather) covered with stylish metal armor and some fur for comfort. The buckles on the sides are a fantastic addition too. 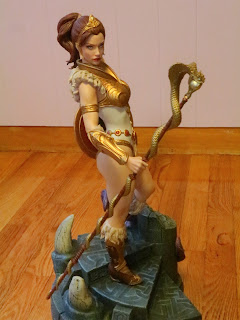 * The Tweeterhead Exclusive version of Teela (a run of 600) comes with the an alternate right arm holding the Staff of Ka, AKA Teela's classic snake headed staff. The staff is made of a lighter material that seems to have a little give to it, keeping it from feeling overly brittle or fragile. It's a much larger accessory than the sword and definitely has more shelf presence. 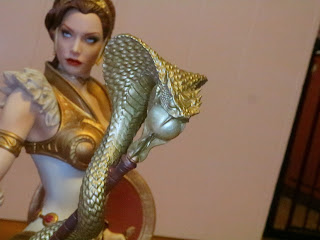 * The headpiece of Teela's staff is fantastic. Seriously, Cobra Commander would be very jealous of this. The texture of the serpent's body is present the entire way down and the details on the face are very sharp and well done. It's kind of cool how the cobra head is biting the orb on top of the staff, too. 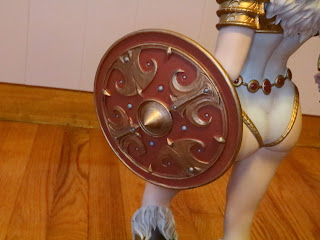 * Teela's shield definitely resembles the shield of the vintage toy but with far more detail and pizazz. the red and gold color scheme fits in with everything else on her outfit and just nicely ties the statue together. 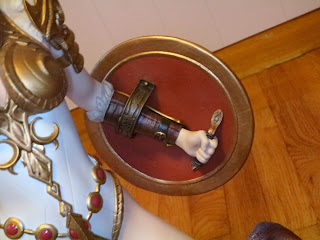 * Here's the other side of the shield where you can see the handle and the band holding the shield on to her forearm. 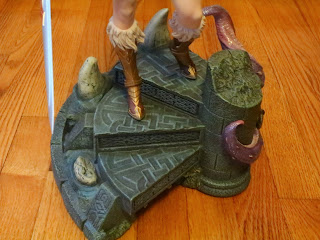 * Teela has one of the most complex bases from this line of statues, even going back to Sideshow's releases. Teela is walking down a set of stairs that seem to be within Castle Grayskull. They're aged and worn smooth and everything is painted with a perfect shade of green that captures the color of Grayskull's ancient stonework beautifully. The tops of the steps are very ornate with a Celtic inspired design etched onto the top of each step. 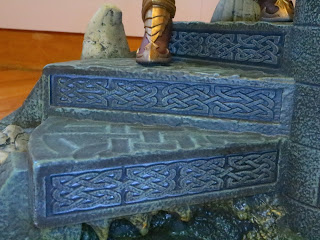 * The risers are also elaborately decorated with a Celtic inspired pattern. It's beautiful sculpting and takes this from being just a great statue of Teela to a fantastic piece overall. An interesting base like this is far more appealing than a standard flat base. 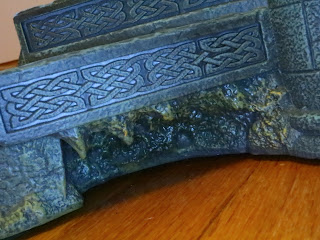 * Underneath the bottom step there is a small alcove, like perhaps there are some missing stairs, or maybe Teela has reached the very bottom and is getting ready to enter into the dungeons and caverns underneath Castle Grayskull. The paint effect makes this actually look wet and you can almost smell the dampness and the moss growing underneath. 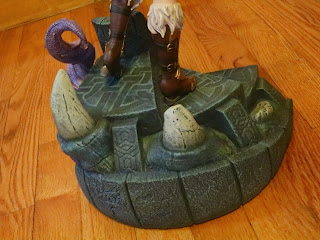 * The sides of the stairs are accented with tooth-like protrusions, similar to the teeth on the front of Castle Grayskull. Again, it's a really neat way to tie the statue in with one of the most recognizable images in Masters of the Universe, too. 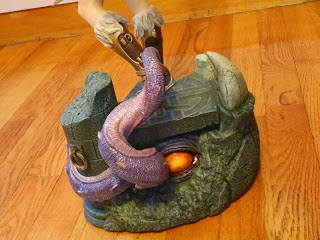 * Originally one of nameless creatures from the vintage Castle Grayskull dungeon grate sticker, this being is now known as the Orlax of Primeria and his tentacles are oozing out from underneath the Grayskull steps. Is he a benign being living under the castle or about to cause Teela trouble? The presence of this guy here just feels like such a classic bit of MOTU and I love it so much. 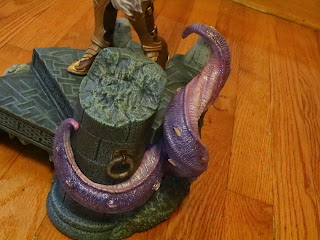 * Those tentacles are wild, too. The texture is different between the bottom and the top of the tentacle and they look all kind of slimey. There are some weird little.. nails or teeth or something on the top side of the tentacles, too. 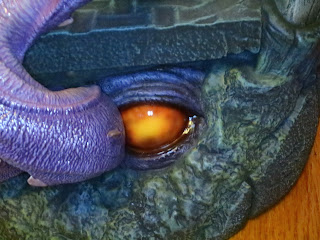 * And here's a close up of the eye of the Orlax. The eye looks really creepy, doesn't it? It's all wet and cloud and weird. Spooky! 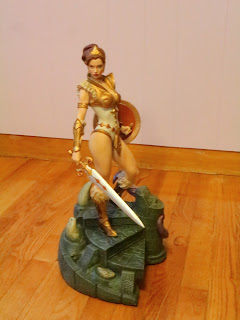 This series of statues is probably my favorite "high end" Masters of the Universe line and while I don't have all of them (I don't have some of the variants and I'm missing Skeletor), I love the ones I do have. Teela is a fantastic addition to the collection and one of the most impressive statues in my collection. I love the ability to swap out the portraits and to have her with either her sword or staff. The sculpting, paint, and design is just perfection as Tweeterhead continues to do an amazing job of creating statues that feel like they're worth the admittedly high price point. My only complaint would be that I would have liked to have seen perhaps a slightly different facial expression between the two portraits and maybe an alternate left hand like Hordak had. Having more display options is always better than fewer. Still, she's a fantastic piece and definitely worthy of a Great and a 1/2 rating. Mer-Man is the next statue slated for release in this line and I have high hopes he'll continue the quality Tweeterhead is known for.

Was Teela one of your first loves? Are you a huge fan of one of Eternia's greatest warriors? Then check out Teela: Warrior Goddess, an archive of all of my Teela reviews.

For more Masters of the Universe Legends statue from Tweeterhead check out the following:
Hordak (Tweeterhead Exclusive)
Hordak's Minion
Posted by Barbecue17 at 6/28/2022