Action Figure Review: The Curse from Spawn by McFarlane Toys 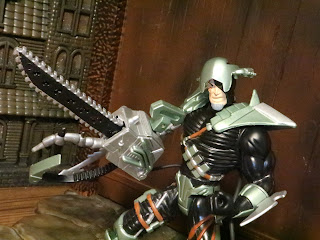 Ready for some more older Spawn reviews? I hope so! The Toddfather can't get out new Spawn figures fast enough now to feed my obsession so I'm having to go back and snag vintage figures I missed as a kid. Today I'm checking out another series 3 figure from 1995: The Curse! The Curse is a character directly from the comic (so many figures were just crated for the toyline) who first appeared in issue #27 as an opponent of Spawn. A religious extremist intent on showing his dedication to God through ascetic practices, as a child The Curse removed his left eye and scarred his own face with the barbed wire from rusty metal fence. Then he removed his own right arm, later replacing it with an upgraded cybernetic arm. I was only 11 or 12 in 1995 and while I was mostly interested in Goosebumps books, Batman, Iron Man, and Congo action figures, Micro Machines, and Star Wars stuff, I definitely paid attention to what was coming out in the Spawn line. I kind of remember The Curse being a bit of a peg warmer back in the day. Heck, he didn't cost me much at all when I picked him up last month at Toy Federation in Greer, SC. Ready to check out the craziness of The Curse? Then join me after the break... 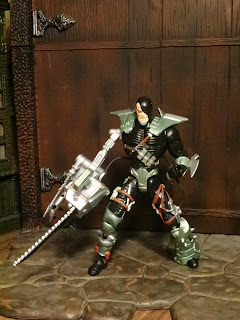 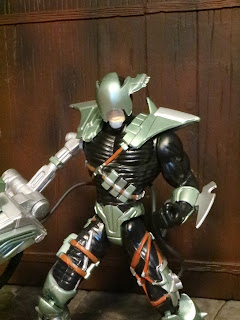 The Positives:
* The Curse is a bit plainer than some Spawn figures, but that's really just because of how outrageous the Spawn line was. The Curse (real name Phillip Krahn) is decked out in a black, insulated body suit covered with random bits of metallic green armor. McFarlane was always upping the detail on their figures at this point and The Curse definitely stands out from so much of what else was on the shelves at the time. His various armor bits look like they're attached via lots of straps and sort of designed to provide protection while still being fairly lightweight. 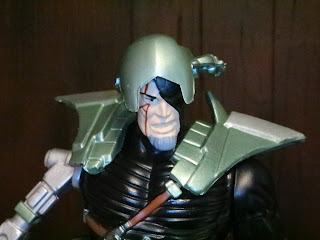 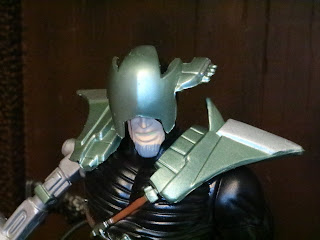 * The Curse's helmet can be removed and can slide up and down via a simple hinge. The helmet covers part of his face, only leaving his nose and mouth uncovered. There's some sort of technology on the left side of the helmet jutting out. Perhaps a motion tracker that makes up for his missing left eye? 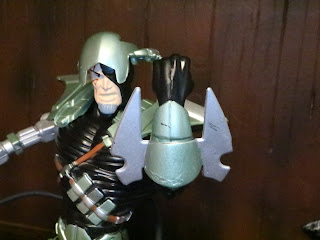 * On his forearm the Curse is sporting an armored bracer with two blades attached to the sides. 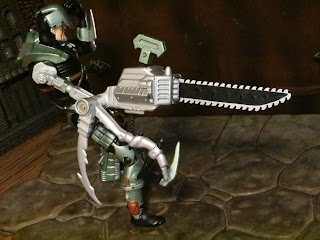 * His right arm has been completely replaced with a bionic arm that's sort of like a Swiss Army Knife amped up to 11. There's a jagged blade, a weird claw-like weapon, and a massive chainsaw. Chainsaw arm for the win! They're articulated, too, with a hinge at the elbow that moves each weapon independently. 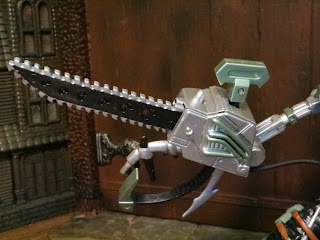 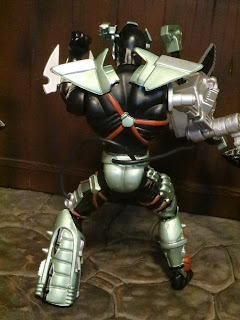 * The back of the figure has lots of coo detail and a couple flexible cords running from different parts. 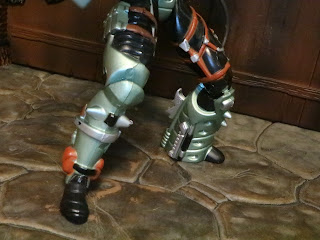 * Is The Curse wearing matching boots? Does Han Solo like being told the odds? That's a resounding no! The Curse is sporting the trademarked McFarlane style of asymmetrical footwear covered with armored plates, spikes, and various straps and fasteners. 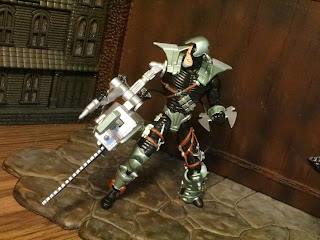 * How the articulation on The Curse? Not bad, really. He's slightly pre-posed with plenty of swivel/ cut joints and some hinges so you're not going to get dramatic poses out of him but he's still fun. He's definitely closer to a classic action figure rather than a modern super articulated figure but he seems sturdy and he's fun to mess around with, particularly the cybernetic arm with the swiveling weapons. 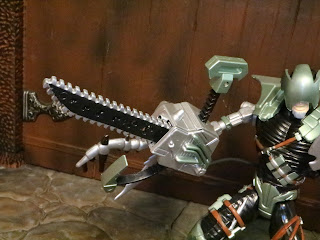 The Negatives:
* My only complaint with The Curse is that his action feature is kind of silly. Move the starter cord back and forth and the chainsaw blade rattles a bit, sliding in and out. The starter cordis definitely oversized and the motion just isn't that impressive. McFarlane Toys was trying to put action features in most of their products at the time to appeal to kids but this one just doesn't work all that well and is a bit weak. 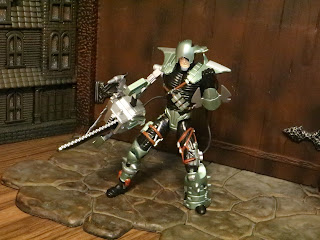 I'm rather surprised at how much I like this guy. He's a pretty darn solid figure considering he's from 1995, and he gets a Great and a 1/2 from me. Decent articulation for the era, a cool sculpt, some gruesome facial scarring, a cool goatee, and a chainsaw arm. Honestly, I think it's the chainsaw arm that sells me on this. It's just too cool, plus there are the other sharp little gadgets on the side. The Curse is fun and I imagine you can pick him up on the cheap, too, if you need a 27 year old Spawn toy in your collection. I wonder if we'll see him in the modern line at any point?
This is the first figure of The Curse I've reviewed. For more vintage Spawn figures check out the following reviews:
Clown
Commando Spawn
Cosmic Angela
Nuclear Spawn
Overtkill
Tremor