Toy Review: Staff of Havoc Spoon from He-Man and the Masters of the Universe by Sonic/ C3 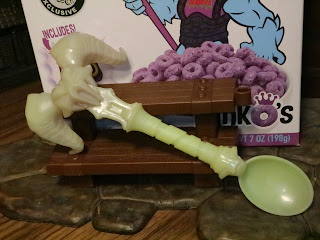 For each of the three characters represented in the He-Man and the Masters of the Universe Wacky pack kids meal promotion at Sonic there is also a coordinating spoon. He-Man has a Sword of Power spoon, Skeletor has a Staff of Havoc Spoon, and Sorceress has a Staff of Magic spoon. Today I'm checking out the Staff of Havoc spoon, a plastic spoon shaped like Skeletor's Havoc Staff. How wild, right? It feels more like a prize from a cereal box rather than a kids meal toy but it is unique and it changes color. Seriously! It's temperature sensitive and it transforms from grey to bright yellow. Let's take a look at it after the break... 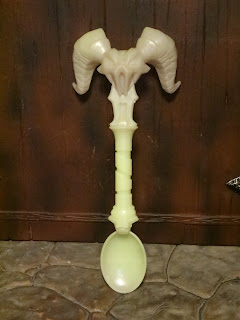 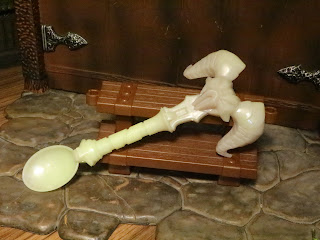 The Positives:
* It's a spoon that looks like the Havoc Staff. That's pretty cool, right? The Havoc Staff is a bit more exaggerated in the Netflix CGI series so that's what we've got here. Plus, the spoon's bowl has the MOTU logo in it. 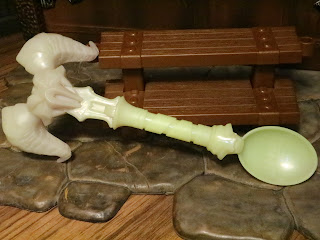 * So, yes, the spoon changes color in heat. I must not have warmed mine up enough because I've seen images of this piece really bright yellow. I didn't even know it changed color until I was messing around with it while taking pictures. 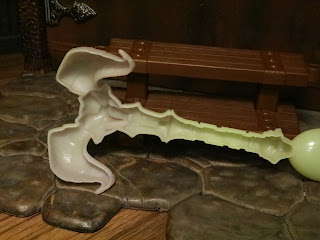 The Negatives:
* The backside is hollow. That's really weird for a spoon that you're supposed to wash and use again, isn't it? 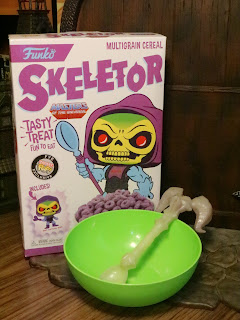 The Havoc Staff spoon is unique for sure (how many other Havoc Staff themed pieces of cutlery do you own?) but it's just not that impressive. I mean, for the $1 or $2 Sonic is selling it for it's OK and a fun extra, especially the color changing feature, but it's definitely more like something you'd expect to find in a box of cereal. I give it an Eh and a 1/2. It's not something most of you will feel the need to track down unless you're a die-hard Skeletor fan or love collecting MOTU promotional memorabilia.
The only other Havoc Staff by itself I've reviewed is the Factory Entertainment Havoc Staff Scaled Prop Replica, but I have reviewed lots of Skeletor figures, nearly all of which came with Havoc Staffs. Check out Snake Mountain for all of my Skeletor reviews!
For more reviews from the Sonic He-Man and the Masters of the Universe promotion check out the following:
He-Man
Skeletor
Sword of Power Spoon