Toy Review: Staff of Magic Spoon from He-Man and the Masters of the Universe by Sonic/ C3 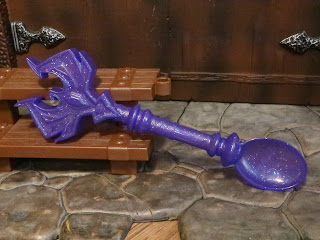 Today I'm checking out the last of the six promotional items from Sonic's He-Man and the Masters of the Universe Wacky Pack kids meal and it's another spoon: The Sorceress' Staff of Magic Spoon. In the Netflix CGI series, Sorceress is Teela in her powered up form (all of the heroes can channel the Power of Grayskull) and she uses a magical staff. That's the staff this spoon is based on. Need another fine piece of cutlery for your next Masters of the Universe Day party? Let's check this one out after the break... 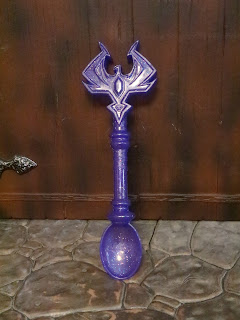 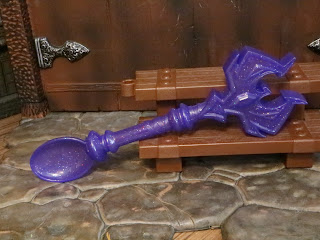 * The spoon is simply a plastic spoon shaped like the Staff of Magic from the show. It's molded in a really nice purple with lots of glittery flecks inside. I like the look of it. 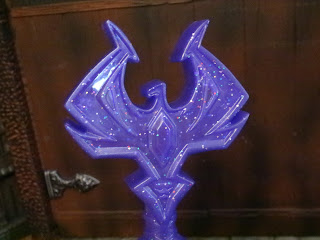 * The headpiece looks like a stylized bird, kind of like the classic Sorceress' bird form. It's a nice sculpt and definitely seems like it would be appealing to any kids and not just those familiar with Masters of the Universe. 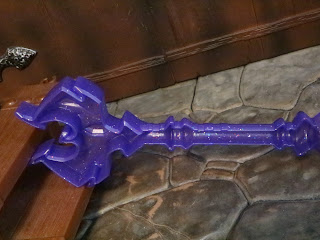 
* I really don't like how the back of this spoon and the Havoc Staff spoon are hollow. It's just weird for holding the spoon and for washing it. 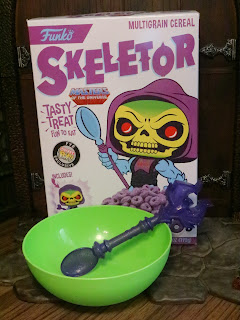 This spoon also gets an Eh and a 1/2 from me. It's OK and I'm sure there are kids who will love it but it's definitely not a really iconic item like the Power Sword or Havoc Staff. Still, the glittery purple is really cool and it stands out a bit. The hollowness of the spoon is just weird, though. How frustrating to wash something with a hollow back like this. Why not just make it solid?

Overall, the He-Man and the Masters of the Universe promotion wasn't as exciting as I'd hoped for. The spoons could have been fun but the only one I really like is the Power Sword spoon. The other two are sort of half baked. The figures of He-Man and Skeletor weren't bad but Sorceress was definitely weak. I wish we'd just gotten six figures rather than the spoons. Maybe Sonic's toys just aren't as cool as some other companies like McDonald's? What did you think? Did you pick up any of the items from this promotion? Let me know in the comments below.


This is the first item of the Sorceress' staff released on its own. For more items from this promotion, check out the following:
He-Man
Skeletor
Sorceress
Staff of Havoc Spoon
Sword of Power Spoon