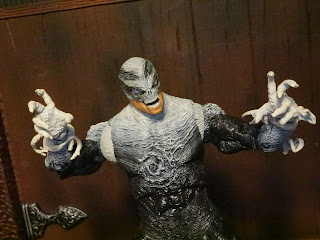 I'm only a little bit familiar with Haunt, Todd McFarlane and Robert Kirkman's supernatural superhero, who is now part of the Spawn Universe comics. The figure looked really cool, though, and I'm interested in checking out the original series, so I went ahead and picked Haunt up. Haunt is part of the newest series of Spawn figures which seems to be trickling out little by little rather than coming out all at one time. Haunt's titular comic book series debuted in 2009 and tells the tale of Daniel Kilgore, a Catholic priest who can merge with the spirit of his deceased brother, a former secret agent. When they join together they form Haunt, an ectoplasm powered superhero. Wild stuff. Let's take a look at Haunt after the break... 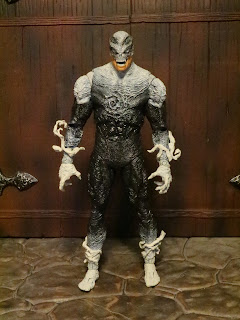 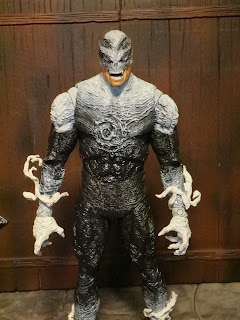 The Positives:
* Like Spawn, Haunt's character design seems to be a blend between a traditional superhero look and a horror character. He looks like he's wearing a black and grayish white suit with a spiral-like logo on the front but the texture of the suit is far more detailed than pretty much any superhero costume you've seen. It looks organic and slimy with a cobweb like texture on the top. It's pretty impressive sculpting  with great little flourishes like the ectoplasm tendrils streaming around Haunt's wrists and ankles. 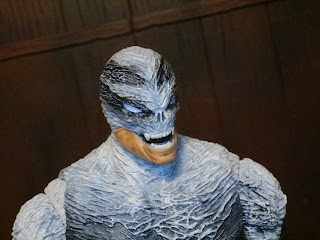 * Haunt appears to be wearing mask with hos lower jaw revealed but the monstrous appearance of the character brings to mind some sort of symbiote like Venom or Carnage. Elongated, oversized eyes, a skeletal nose, and sharp fangs definitely make Haunt look more like a villain than a hero. Of course, he's part of the Spawn Universe, so that's probably par for the course. 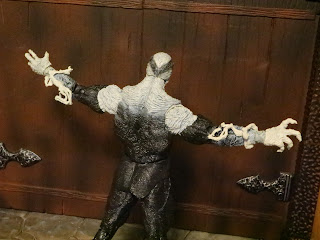 * Here's a shot of the back of the figure to show off the sculpted detail the entire way around. It's excellent work and shows off the level of detail that is achieved when you're not constantly worrying about reusing sculpts. 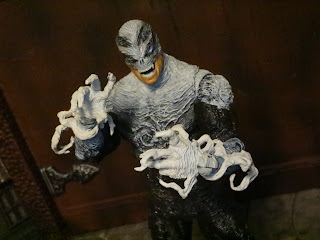 * Haunt's hands are crazy looking. They have ribbon like tendrils streaming off of them and some long, sort of sharp, looking fingers. They help make all of his poses rather dramatic. 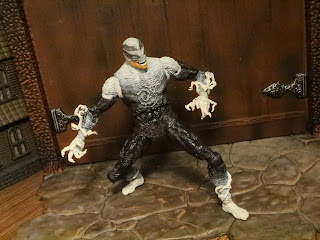 * Speaking of posing, Haunt is really nicely articulated. The Spawn line has fantastic articulation and Haunt is another win. He's very mobile with little about his costume to inhibit his movement. He's got the "butterfly" hinges on his shoulders which allows for some crazy arm poses. The Spawn figures are some of the most durable toys on the market right now, which is definitely something I didn't think I'd be sayin about this line. 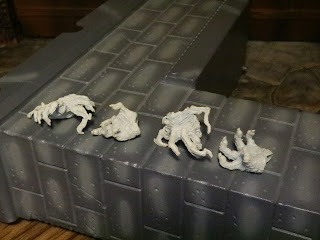 * Haunt comes with four hands, two with shorter, more normal fingers, and two with longer, crazier fingers and long ribbons of ectoplasm streaming off of them. They swap easily and allow more more options when posing the guy. 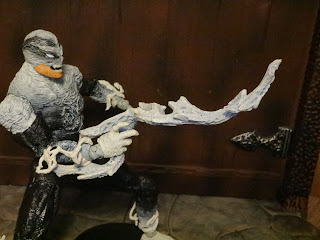 * Haunt also comes with a tendril of ectoplasm that he kind of uses like spider web, it seems. It's a solid piece that he can hold in a few different ways, and it does look pretty cool in his hands. Futz around with it a bit and you'll get some neat poses out of this piece. 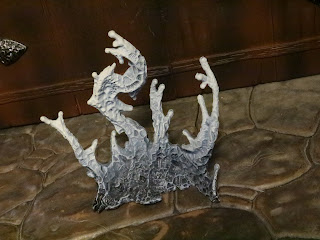 * Haunt also comes with base made of ectoplasm that he can stand on for more dramatic poses. It's a really cool display piece as you can pose it behind him to make it look like his web-like ectoplasm tendrils are popping up from behind him or you can pose it in front of him to look like he's raising them up. It's versatile and a neat way to show off the character's powers. 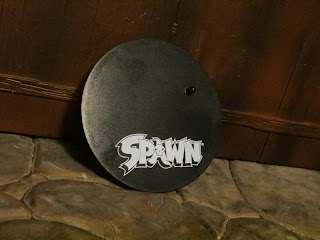 * He also comes with a simple disc stand with the "Spawn" logo on it if you just want him to stand around, too. I'll never turn a display stand down. 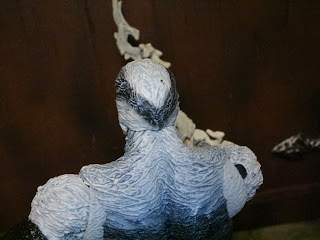 The Negatives:
* My only complaint with Haunt's articulation is that his head doesn't have that great of a range of motion. I'd really hope a character like Haunt could look up more but his head is pretty much stuck just looking straight forward or down. A small cut out of his neck, like the Marvel Legends Retro Collection Symbiote Suit Spider-Man, would have been very welcome here. 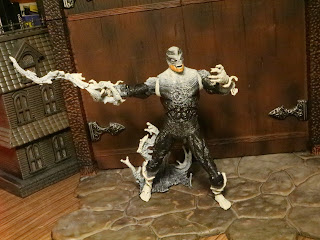 It's pretty cool to get a figure of a never before made character and while I'm not overly familiar with Haunt, he has been around for well over a decade now, so it's neat to see him in action figure form. Haunt is a Great figure and I'm excited to see him in the Spawn Universe books. I just finished the Spawn Compendium vol 2 a week or two ago but I do plan on reading the newer Spawn Universe stuff as it comes out in trades. Haunt's a fun, well articulated figure with some excellent accessories and a unique look and I'm excited to add him to the Spawn team shelf.
This is the first figure of Haunt that I've reviewed. For more Spawn action figures from the rebooted line check out the following:
The Clown
The Clown (Bloody)
Cy-Gor
The Dark Redeemer
Mandarin Spawn Deluxe
Ninja Spawn
Overtkill
She-Spawn
Soul Crusher
Spawn (Deluxe Set)
The Violator (Bloody)
Posted by Barbecue17 at 6/05/2022