Action Figure Review: Sorceress from He-Man and the Masters of the Universe by Sonic/ C3 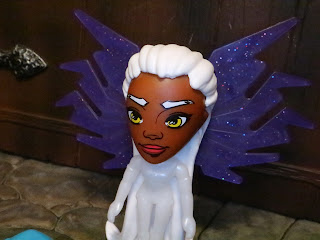 Sorceress is the third character in Sonic's He-Man and the Masters of the Universe Wacky Pack kids meal promotion and it's time to take a look at her today. In Netflix's He-Man and the Masters of the Universe show all of the characters can transform using the Power of Grayskull; not just He-Man. When she channels the Power of Grayskull, Teela becomes Sorceress, a magic wielding character. There is a mature, more traditional sorceress in the show named Eldress, so I've always considered this Sorceress to basically be Teela. The Sonic promotion has three figures in it and while He-Man and Skeletor are pretty decent little figures, Sorceress is rather disappointing. There are some cool details on her but some really odd decisions made, too. Let's take a look at Sorceress after the break and see what's so odd about this figure... 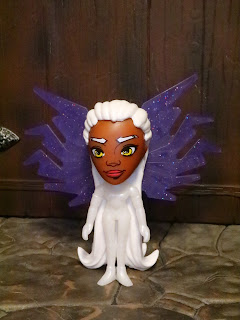 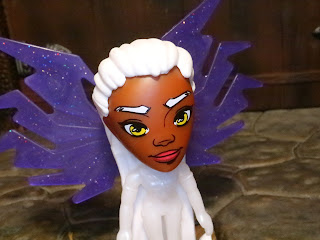 
* Like the other figures in the set, Sorceress's facial features are printed on rather than sculpted. It's a cool aesthetic choice that does lend the figures a unique style. Kind of reminds me of Hasbro's Mighty Muggs. Her hair is fully sculpted, though, and merges nicely with the printed face. 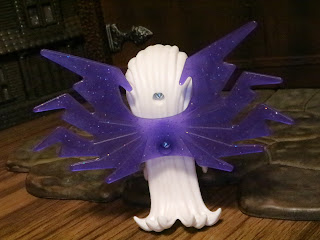 * Sorceress has some very cool translucent purple wings with glitter flecks inside the plastic. It's a neat visual pop that definitely grabs your attention. 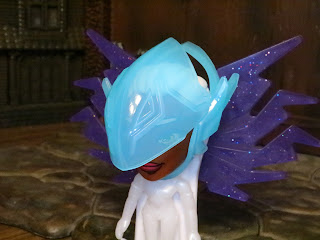 * She also comes with her helmet. It looks pretty neat and definitely adds some more color and complexity to her costume. 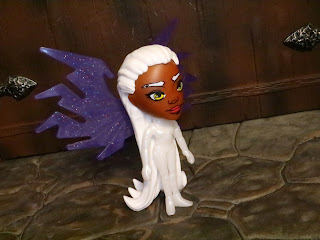 * OK, so here's where the problems come in. First, Sorceress has no articulation. It's clear that her head is on a balljoint but her long hair is attached to her wings and body via a screw, so the balljoint is rendered immobile. What a weird choice? Even her arms don't move. Her wings can swivel around but that seems to be less of a point of articulation and more just movement due to the wings being attached with a screw. 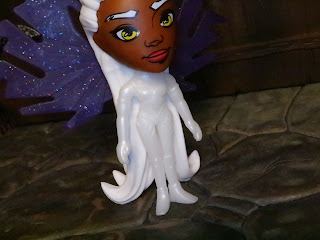 * There is no painted detail at all on Sorceress' body. It's all just plain, shiny white and just comes off as really dull. Couldn't they have tried anything to break up her outfit a bit? 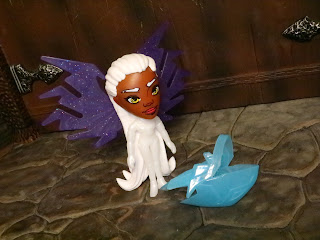 * The helmet looks great but, oh my gosh, does it fall off at the drop of a hat. It's crazy. I can't fathom how a helmet can be designed that doesn't fit on a figure but here it is. 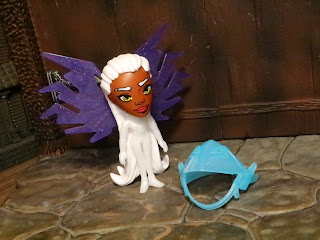 This is a very, very Eh figure. I mean, it's interesting since it's a really unique look for Teela (this show has a completely unique take on the character) but the toy just isn't really good. It stands up and it isn't broken, so those are pluses. I really do like the character design but this figure doesn't capture it well, not even for a toy included in a kids meal. She's definitely one to skip if you're only cherry picking this line.


Are you a huge fan of Teela? Check out my archive of Teela reviews, Teela: Warrior Goddess, for a bunch of Teela goodies from across MOTU's 40 year history!

For more figures from Sonic's He-Man and the Masters of the Universe promotion check out the following:
He-Man
Skeletor
Staff of Havoc Spoon
Sword of Power Spoon