Action Figure Review: The Freak from Spawn by McFarlane Toys 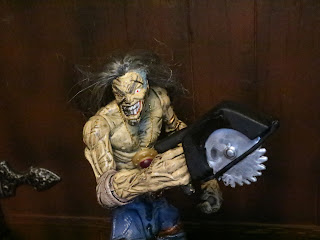 Ready for another classic Spawn review? Today I'm taking a look at the Freak from the sixth series of Spawn figures. Released in 1996, the Freak appeared about a year after the character first appeared in the comics as another foe making life tough for Al Simmons. The Freak is a pretty wild looking character and was the subject of a mild controversy when he made the 1996 Warped Toys List, a list of "inappropriate" toys put annually by Reverend Rose between 1986 and 2001. I remember that ToyFare magazine would often cover the list throughout their run and OAFE.net has a great list of the recipients of the award. The Freak is a bad guy with a wild, unkempt look to him. He's also loaded with what the packaging calls a "Nasty bag of tricks." I picked the Freak up during my last trip to Toy Federation in Greer, SC, and I've been eager to show him off. Let's take a look at the Freak after the break... 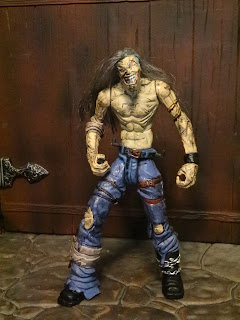 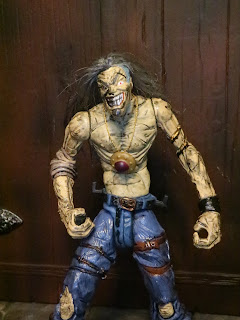 
* The Freak is a thin, wiry guy that puts me in the mind of Iggy Pop combined with Eddie, the Iron Maiden mascot. He definitely doesn't look like he takes care of himself and he's covered with grime. He also looks rather emaciated with visible ribs and stuff. 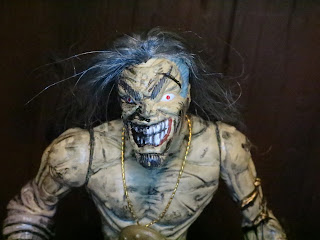 * The Freak's face is really crazy. Look at that massive grin! He's out of it. He's definitely a wild and crazy guy with massive teeth and have of his face covered in dark grime. Is he greasy or is this some sort of scarring, possibly from getting burned or something? 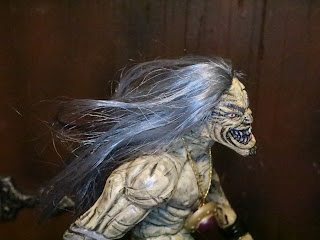 * The Freak also has long, gray hair. Yup, actual rooted hair, like a doll. But the Freak is definitely no doll. He's an action figure, man. His hair reminds me of Bob from Twin Peaks. 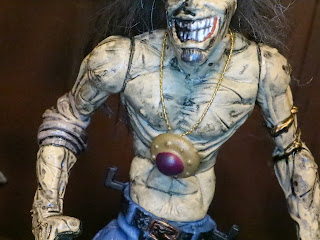 * The Freak is also sporting a cool amulet. It's a simple plastic piece on a shiny string but it definitely looks interesting. I don't remember if there's anything special or significant about the amulet in the comics, so maybe it's just an aesthetic thing. 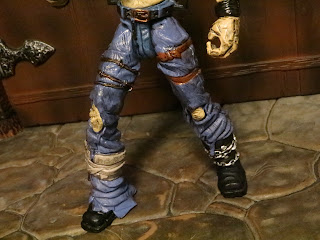 * McFarlane Toys's sculpting team did a great job on the Freak's jeans. They look really worn and raggedy with worn out knees, random straps of leather, cloth, chain, and wire, and lots of grime. While the left jean leg is tucked into the Freak's boot, the right leg is hanging over it and dragging on the ground. 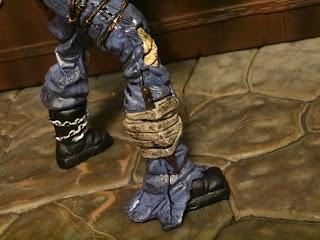 * It's not a removable piece but there is a small knife tucked into the bandages on the Freak's right leg. It's a pretty neat little detail that nicely complements all of the other sharp stuff he's carrying with him. 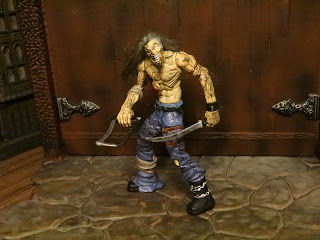 * The Freak was released in 1996 and his articulation is pretty standard for the time. He has the standard six articulation points plus a swivel left wrist and a swivel right forearm. Think of other 1996 toylines like Kenner's Total Justice and Star Wars: Power of the Force 2, Toy Biz's various Marvel lines, Playmates' Flash Gordon, or anything from Trendmasters; the Freak is pretty standard with those. He feels rather sturdy, moves decently, and can use his weapons in a variety of creepy ways. 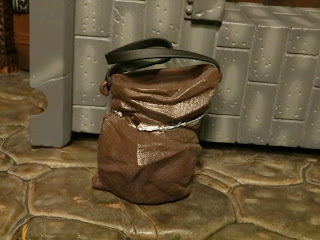 * The packaging advertises that the Freak comes with a "nasty bag of tricks" so here is the aforementioned bag. It looks like a leather sack, like Santa's bag from Hell, and it has lots of holes and wrinkles sculpted in it. It's solid plastic, just FYI; it's not really a soft goods sack. * There's a rubbery strap so you can sling the sack around the Freak's shoulder and there's plenty of room inside to carry his sharp and nasty goodies. 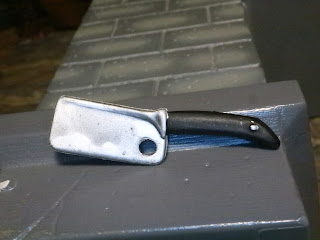 * So what's inside? First up is a meat cleaver. Maybe he just appreciates freshly sliced meat? 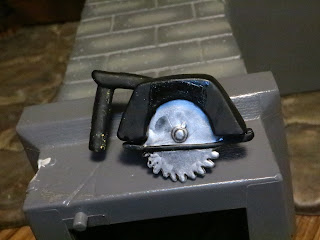 * The circular saw might be my favorite piece of gear included with the Freak. This thing is just so nasty. You don't see circular saws everywhere, either, so this is a cool and novel little piece. 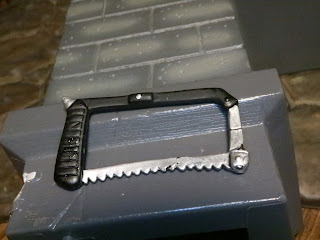 * The hacksaw is a great accessory as well. Check out the detail on this, especially on the teeth. This is another really solid accessory that's pretty unique. 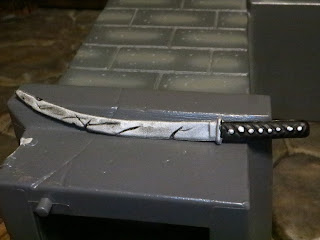 * When he wants to show some class and style the Freak pulls out his wakizashi. This looks like a wakizashi, right? It's a curved blade but shorter than a katana. It's also in pretty bad shape with lots of cracks. Learn to take care of your sword, Freak! 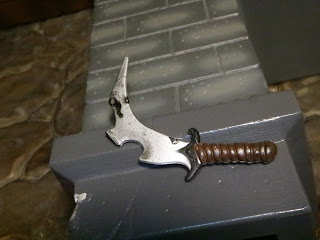 * This is a pretty wild looking knife, isn't it? If the Freak cut you with this and you loved you'd probably contract something. 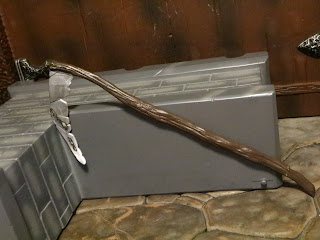 * Last up is the Freak's largest weapon: A scythe. He's a death dealer, I guess. It's a pretty cool looking scythe with some nice detail on the blade and on the wooden shaft. 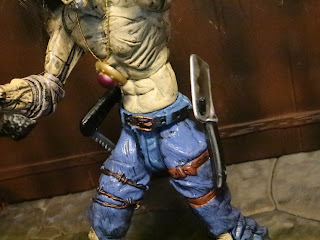 * If you want to have the Freak carry a few of his tools close at hand you can use the pegs on his belt. The cleaver has a hole that fits on one peg while the hacksaw just simply hangs there on the hook. 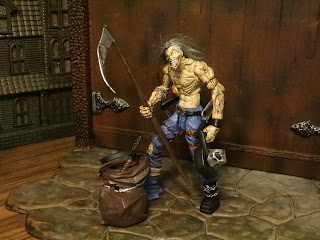 The Freak is a crazy good figure. He's just bizarrely wonderful with great sculpting, decent articulation that was on par with most other toys for 1996, and some really cool accessories. Seriously, I wouldn't blame you if you picked this guy up just to scavenge him for accessories for other toylines as there is such a great variety of sharp and stabby tools here. The Freak came at a time when McFarlane was really improving their sculpting and paint work with every series but was still often including features that made these fun action figures. He's an Epic figure and one of the coolest Spawn figures I've came across.

This is the first figure of the Freak I've reviewed. For more Spawn figures check out the following:
Clown
Commando Spawn
Cosmic Angela
The Curse
Nuclear Spawn
Overtkill
Tremor