31 Days of Toy Terror X: Terror Claws Skeletor from Masters of the Universe Origins by Mattel 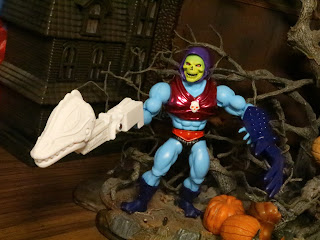 While this year's 31 Days of Toy Terror isn't devoted to Skeletor like last year's festivities, Old Bonehead is still going to make a couple appearances. First up is a look at the Masters of the Universe Origins deluxe Terror Claws Skeletor figure. Terror Claws Skeletor was released much earlier this year but I didn't get mine until late June or early July. Like in the vintage line, this variant of Skeletor shipped alongside Flying Fists He-Man. While these are definitely my least favorite variants from the vintage line they're still quite fun and it's a nice way to own a toy similar to the vintage figure without paying a crazy amount of money. I have my vintage childhood Skeletor, Battle Armor Skeletor, and Dragon Blaster Skeletor but I've never owned a vintage Terror Claws Skeletor. This figure has two skeletal portraits, massive metal claws, and a bone dragon weapon; it's perfect for the Halloween season, right? Let's take a look at Terror Claws Skeletor after the break... 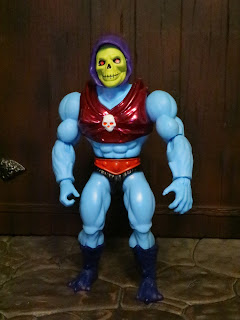 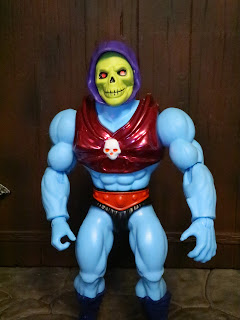 * As I admitted above, the vintage Terror Claws Skeletor is my least favorite vintage Skeletor variant. Still, Mattel did an excellent job with the Origins version of the figure and captured the unique look of the vintage toy. Some of the differences between this figure and the original are that the hood is a bit of a brighter shade of purple and Skeletor's chest armor (some people call it his sports bra) is more of a metallic red color rather than maroon or purple. It's definitely more noticeable. 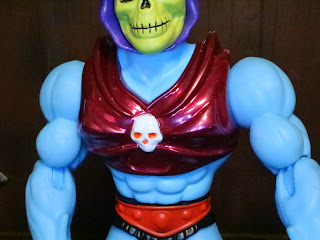 * Mattel threw in an extra feature by offering up Skeletor's chest armor as a vac-metallized piece. It's really neat and shiny and matches well with Flying Fists He-Man. 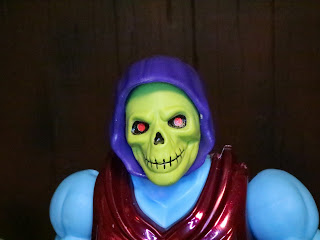 * Like most other deluxe figures in Origins, Skeletor has two portraits. The first up is a rather standard but still nicely sculpted and painted neutral headsculpt. Well, it kind of looks like Skeletor is smiling a bit here, but it's somewhat reminiscent of the vintage toy. Skeletor looks happy about something here, which is just kind of unsettling on its own. 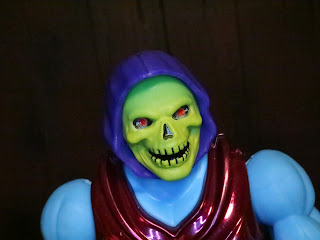 * The second portrait has Skeletor laughing. Seriously, this portrait is ripe for the "You can't hear pictures" meme as I can just hear Alan Oppenheimer's iconic Skeletor laugh when I look at this figure. 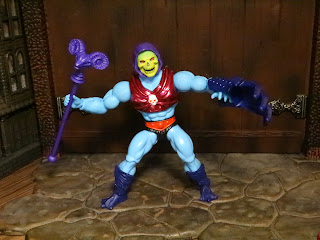 *   The MOTU Origins figures are built like the vintage toys but with modern articulation. While their bulky frames make the articulation a bit clumsy, they do feel like an evolution of the vintage line. Imagine what you would get if you mixed a vintage figure with a MOTUC figure. They're quite fun to play with and they feel very sturdy. Terror Claws Skeletor has some limitations due to the waist swivel being part of the action feature but overall he's quite similar to most other figures in the line. Not as modular, however. You can't break this guy down. 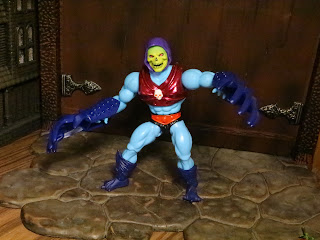 * The action feature is pretty cool and more than makes up for the lack of the ability to disassemble the figure. Twist his waist and Skeletor's right and left arms go up and down as he claws with his terror claws or his dragon weapon. It works quite well and makes messing around with this guy really fun. 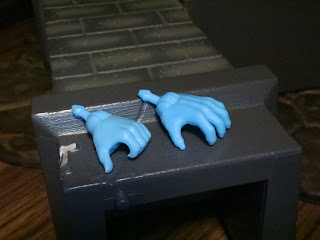 *  Like most of the other deluxe figures Terror Claws Skeletor comes with two interchangeable left hands. The vintage figure had two standard grips but if you want an open palm, you've got the option.  It's not a big thing but it's a welcome feature that makes the figure just a bit more versatile. 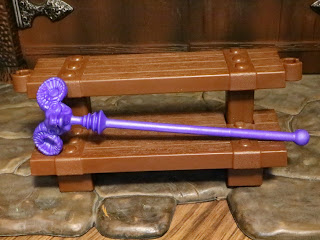 * Skeletor comes with his classic Havoc Staff (something the vintage toy didn't have) in a much brighter shade of purple. I really like the look of it. It's just very eye-catching. 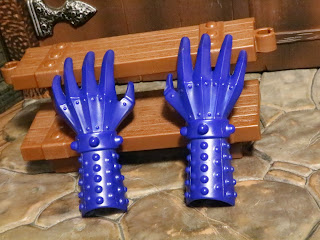 * The terror claws are quite large and fit over Skeletor's wrists. They're massive metal claws with lots of rivets and nubs on them. While they seem a bit impractical, they also seem like they could be devastating in battle. They are new sculpts and not reused from the MOTUC Terror Claws Skeletor. 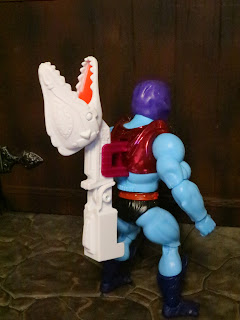 * There's a "battle clip" on Skeletor's back which you can use to help swing his waist back and forth or which can store his dragon skull weapon. There's also a sculpted thumb grip at the bottom of his back. On the vintage figure the battle clip was a separate piece (very often lost or broken), so maybe making it part of the figure was a smart move here. 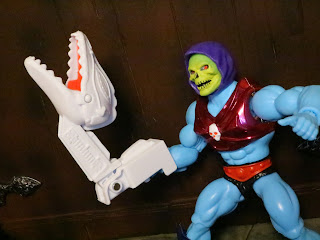 * Speaking of the dragon skull weapon, here it is! It's an unusual weapon with a hinged jaw that opens and a mixture of organic bone and technology. It's weird and probably impractical but you gotta give it to Skeletor: It's certainly eye-catching and makes a statement. 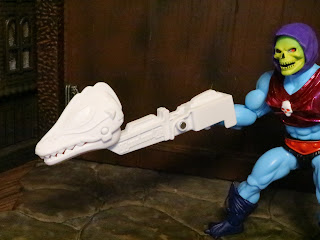 * There's a hinge on the dragon weapon so it swings up and down when Skeletor's waist is pivoting. What an unusual weapon. It's like a skeletal nunchaku or something. 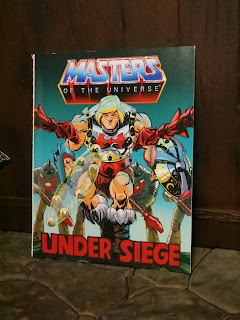 * Skeletor comes with the same minicomic as Flying Fists He-Man. It's not the great American novel or anything but it definitely is a fun addition to the sets. 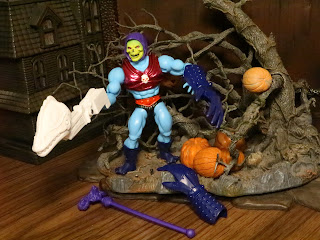 This is a really well done Skeletor figure that just improves upon the vintage toy with the new headsculpts. He's got all of the goodies of the vintage figure plus shinier armor, a Havoc staff, and an extra left hand. Mattel really puts quite a bit of value in their deluxe figures and I don't recall really being disappointed by any of them so far. This line continues to impress and I hope we see the rest of the vintage Skeletor variants in the next year or two. This one's an Epic figure and as someone missing the original vintage toy, this makes that hole in the collection a bit less noticeable.
If you're a fan of Skeletor/Keldor then make sure to check out Snake Mountain, my archive of all of my Skeletor reviews.