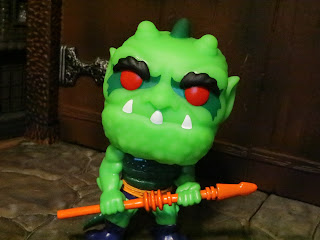 There were two Masters of the Universe POP! vinyls released for Funkon 2021: Roboto and Whiplash. Since I've already reviewed Roboto it's now Whiplash's turn in the spotlight at Action Figure Barbecue. Whiplash was part of the third series of vintage MOTU toys (from 1984) and is a really common vintage figure to find. He's very recognizable, has a great name, and is well know but he doesn't tend to show up in MOTU merchandising that often. That's why it's so cool to see that Funko seems to be trying to make everyone. Well, except for Teela. Clearly I'm going to have to summon the power of my big ol' boot and go to Funko headquarters to explain why Teela needs to be made in POP! form ASAP. Anyways, we're talking about Whiplash today, the evil tail-lashing warrior who assist Skeletor and the Evil Warriors. Let's take a look at the Funko POP! Whiplash #82 after the break... 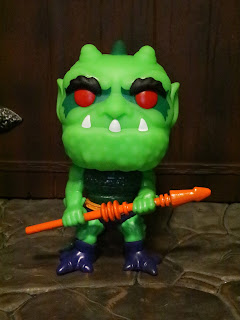 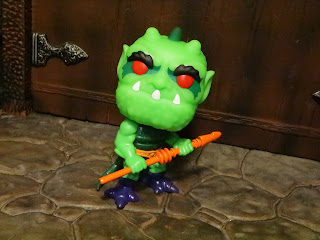 The Positives:
* Like most other POP! vinyl figures Whiplash is a solid vinyl toy with a swivel head and the ability to stand up straight. The style of these figures obviously isn't everyone's cup of tea but, considering they've been producing them for over a decade now, they're doing something right. Whiplash has a bit of a cool battle pose and looks pretty fantastic wielding his bright orange spear in two hands. He's pure menace. 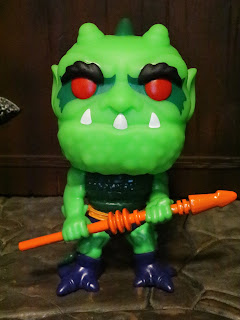 * Whiplash actually looks better than his vintage toy. Yes, you can fight me if you disagree. No, seriously, the vintage Whiplash has always looked a bit dopey and ill-proportioned to me but this guy looks right. He's kind of a gator man and thus the stockier build of a Funko POP! with a larger head looks great. His skin is covered with bumps while his chest has lots of ridges that remind me of alligator skin. Throw on some leg ridges and big, three-toed feet with purple boots and you have a pretty wild Eternian. 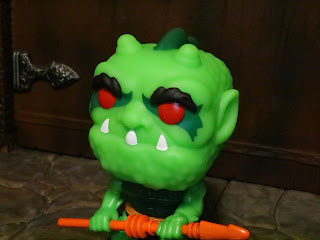 * The oversized noggin of the POP! vinyl style works well here as it gives Whiplash a lot more character and makes him look tougher. The all red eyes are good, too. He's still got the Muppet styled eyebrows but they look less goofy here with his all red eyes and cool deep green eye markings. 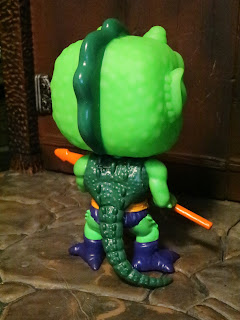 * Flip ol' Whiplash around and you can check out his signature "battle-thrasher" tail. The sculpt is great on his ridged back and his tail does look pretty menacing. It doesn't really whip or anything but it looks like it could if you really believed. 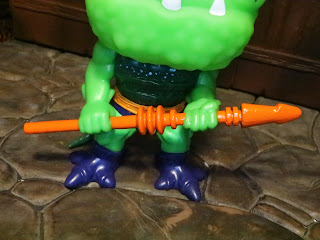 * The vintage Whiplash was packed with an orange spear cast from the same mold as the Castle Grayskull weapons rack's spear. This looks just like the vintage accessory. 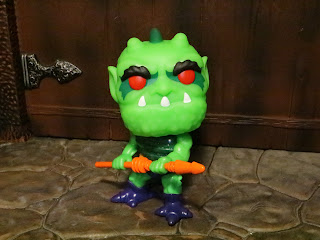