Action Figure Review: Jitsu from Masters of the Universe Origins by Mattel 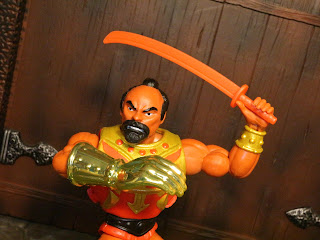 The second figure in Masters of the Universe Origins series 7 is another figure from the vintage line finally getting his spot in Origins: It's Jitsu, the Evil Master of Martial Arts. The evil counterpart of Fisto, Jitsu is a master warrior with a golden right hand posed in a knifehand strike or karate chop. While Jitsu only showed up one time in the Filmation animated series in 1983 because Filmation feared that the character might be perceived negatively as a racial stereotype, Jitsu is a well known and loved vintage MOTU character. In Masters of he Universe Classics Jitsu even took over the rule of Snake Mountain after Skeletor took off into space. Let's take a look at one of he deadliest and most skilled Evil Warriors after the break... 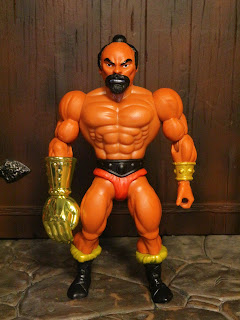 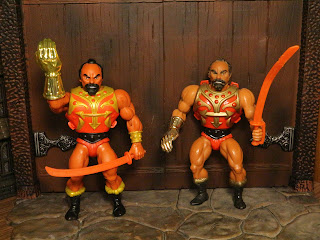 Comparison:
* On the left is the MOTU Origins Jitsu while my very beat up vintage Jitsu figure is on the right. What's different? The main thing, besides the articulation, is the colors. The Origins figures feature much brighter and bolder color choices so Jitsu's armor has a more yellowish gold look to the highlights. 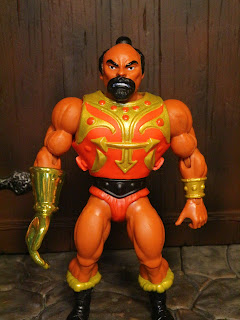 The Positives:
* Jitsu came out in the third year of the vintage line and followed the classic MOTU pattern quite well: Basic body, new head, armor, and a gimmick. Jitsu armor and trunks are red with gold highlights. It's a very ornate and impressive looking outfit that helps it stand out from the rest of the warriors with more barbarian looking armor. In fact, the vintage Jitsu's armor was later reused for King Randor. Recent rumors indicate we'll King Randor in series 9, so it seems likely this armor might get used again. The armor is a pliable plastic overlay that fits on the figure well and is easy to put on and remove. 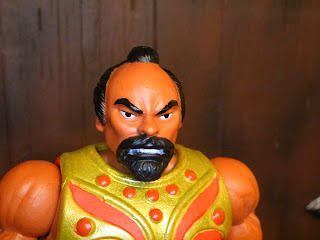 * The Origins figures are absolutely homages to the vintage figures so that's what Mattel was going for here: An update to the vintage figure. Jitsu's face is wonderfully expressive with fantastic facial hair. You can tell that he and Fisto are having a battle of the beards any time they meet in battle. 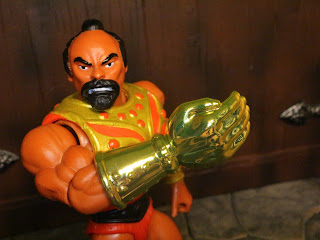 * Jitsu's best feature might be his massive gold gauntlet. Or maybe it's actually a giant golden hand? Who knows? It's sculpted in the form of a karate chop or knifehand strike and it's pretty large and seems like a fierce weapon. It's also given a vac-metal finish that makes it all shiny and awesome looking. Perfection! 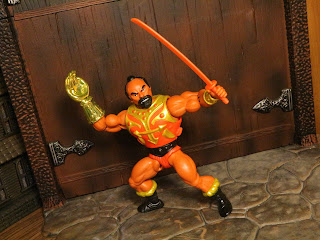 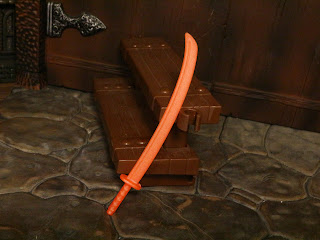 * While the vintage Ninjor reused Jitsu's sword, the Origins Jitsu reuses Ninjor's sword. Funny, huh? The katan looks great. It's molded in orange plastic, like the vintage toy, but it doesn't have the incorrectly placed handguard that the vintage version had. That's a huge plus as it made getting Jitsu to hold his weapon awkward. 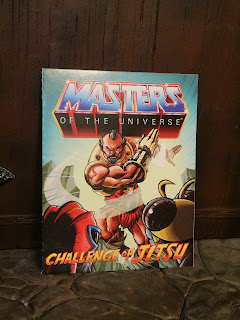 *  Each figure in the series also comes with a mini comic. Yes, an actual minicomic. Everybody in series 7 gets the same comic but it's a cool way to familiarize kids picking up these figures with the characters. This is a simple story where Stratos and Buzz-Off go after Jitsu. Nothing too special but cool art and just the fact that it's included is a big perk. 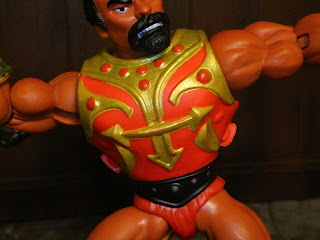 The Negatives:
* The gold paint on the armor is kind of messy with a lot of bleed and some spots where the gold doesn't fully cover the red. The vintage figure actually has a neater and cleaner armor design, which is kind of surprising and a bit of a bummer. 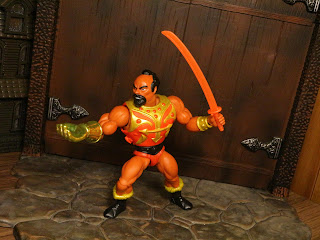 Jitsu turned out quite well. Yeah, it would have been nice if his armor had neater paint applications but overall I love his color scheme. I'm also loving his expression and his vac-metal hand. Jitsu is really fun and it's always fun to have him on the shelf to go toe-to-toe with Fisto. He's a Great figure and not only is he well done and fun to pose but he also gets us one figure closer to having the vintage roster completed. Mattel's just about halfway through the vintage line at this point. Will they make it? Let's hope so!
If you're a fan of Jitsu I've also reviewed the Eternia Minis Jitsu.
For more Masters of the Universe Origins reviews check out the following:
Battle Armor He-Man
Battle Armor Skeletor
Battle Cat
Battlefield Warriors
Beast Man
Beast Man (Lords of Power)
Buzz-Off
"Buzz Saw" Hordak
Castle Grayskull
Clamp Champ
Eternian Goddess
The Evil Horde
Evil-Lyn
Evil-Lyn (200x)
Faker
Fisto
He-Man
He-Man and Prince Adam 2-Pack
Hordak
Land Shark
Lords of Power
Man-At-Arms
Man-E-Faces
Maniacal Mimics
Mer-Man
Mer-Man (Lords of Power)
Mosquitor
Mysteries of Grayskull
Ninjor
Orko
Panthor
Panthor (Flocked)
Prince Adam & Sky Sled
Ram Man
Rise of Evil
Roboto
Scare Glow
She-Ra
She-Ra (PowerCon Exclusive)
Skeletor
Stinkor
Stratos
Teela
Trap Jaw
Tri-Klops
Tri-Klops ("The Terror of Tri-Klops!")
Webstor
Wind Raider
Zodac
Posted by Barbecue17 at 2/23/2022