Action Figure Review: Mantenna from Masters of the Universe Origins by Mattel 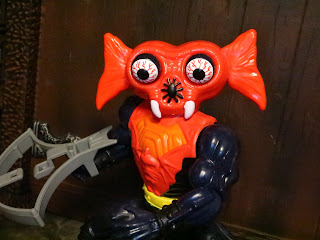 While Series 9 of Masters of the Universe Origins does have a He-Man and a Skeletor variant, there are also two new figures: Mantenna and Pig-Head. If Pig-Head doesn't sound familiar, it's because he's originally from Olmec Toys' Sun-Man: Rulers of the Sun line, but Mantenna ought to be familiar to most every fan of Masters of the Universe. Mantenna had a figure in the vintage MOTU toyline (I ended up with two as a kid after I found one buried in a sandbox) and was a prominent character in Filmation's She-Ra and the Princess of Power. Mantenna is one of the main members of the Evil Horde and while he was bullied by Hordak in the cartoon, the toy version of Mantenna is pretty terrifying. There was a point some time last year when I was really worried that Mattel would burn through the easily made vintage lineup figures (i.e. those who use the basic He-Man body) and would neglect the characters with unique bodies. Mattel seems to be on track to really deliver with Origins as characters like Leech and Mantenna have really turned out to be excellent releases. With next year focused on the Snake Men and Mattel releasing a solid amount of deluxe figures, recreating the vintage line-up in Origins seems now more doable than ever. Mantenna is a standard figure, though, which really surprised me. He has an action feature and four fully articulated legs. That's pretty impressive! Let's take a look at the Horde's "Evil Spy with the Pop-Out Eyes" after the break... 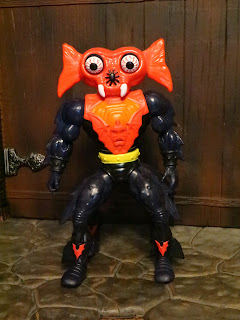 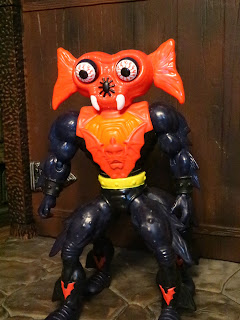 * Mantenna is another figure that looks very close to his vintage counterpart. I love Mantenna in the Filmation cartoon but the vintage toy was never one of my favorites, oddly enough. Some people are nuts about him, though. I don't dislike the guy or anything, but I think even casual fans and die-hard Mantenna maniacs will love this guy. The colors look spot on, the sculpt is nicely vintage with some impressive modern details, and the articulation meshes well with his unique body. 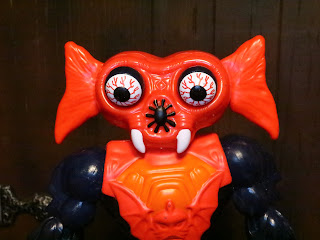 * The headsculpt is awesome here and really captures Mantenna's wild design. He looks like the monster from a 1950s or early 1960s creature flick. The paint details really neat and clean as are the sculpted details. You can really see the texture Mantenna's head if you look closely. 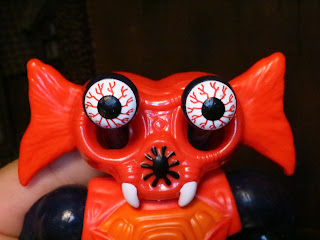 * While the vintage Mantenna's eyes slid in and out with a simple lever, the Origins version uses a spring mechanism. Pull down and the eyes bug out; release it and they come back into place. The eyes look great and the feature works well, so I'm satisfied. 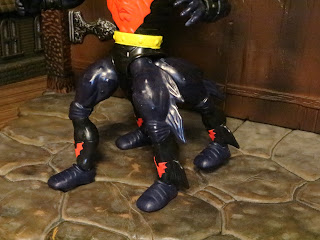 * Mantenna is supposed to have four legs but the vintage figure only had two. Well, actually, it had four, but the two legs on each side were sculpted together, so the detail is easily missed. This time around Mattel gave Mantenna four separate legs and it's a cause for seperation. He looks really cool and the legs are are nicely sculpted and very unique. They're all fully articulated, too, so no shortcuts. 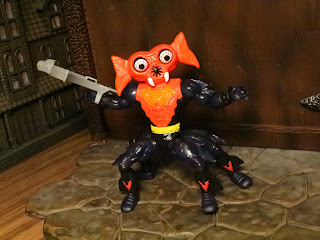 *  While Mantenna has a unique body, he's articulated the same as the rest of the MOTU Origins figures, meaning he has the style of the vintage toys but with more modern articulation. While their bulky frames make the articulation a bit clumsy, the figures do feel like an evolution of the vintage line. Imagine what you would get if you mixed a vintage MOTU figure with a MOTUC figure. They're quite fun to play with.
* They're also modular. and can be easily separated to make your own lazy boy customs! Who wants four legs? 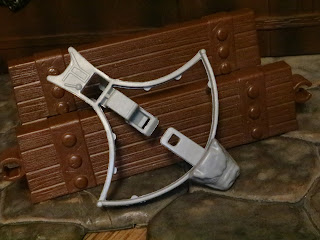 *Mantenna comes with his gray crossbow which were the primary weapons of all of the vintage Horde figures. I've never really cared for these until the Four Horsemen redesigned them in the NECA stactions and MOTUC lines but considering that Origins are truly supposed to be updates of the vintage toys, I'll say that Mattel did a good job of capturing the function and appearance of the vintage accessory. The weird "crossbow" feature where the front can spring forward a little bit even works. 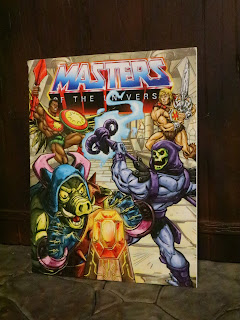 * I'm never going to turn down a minicomic and I love that Mattel brought them back for Origins. This one features the characters from this series as well as Sorceress, Sun-Man, and a giant Cthulhu-like creature. 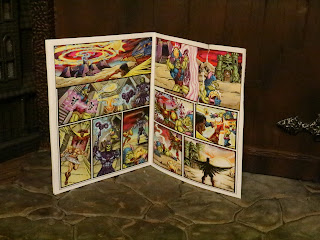 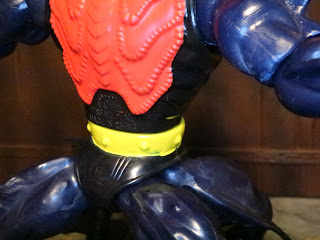 * There's some really gloppy paintwork on Mantenna's belt. The yellow looks green from some angles due to the blue underneath. There are also a few other areas with little paint issues. I get that these are simpler figures but I do wish Mattel would find a way to tighten up the paint applications a bit more. 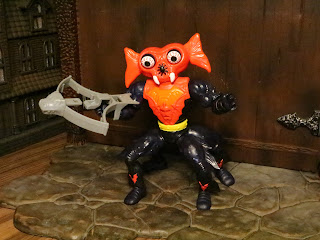 In some ways, Mantenna is one of the coolest basic figure out there in Origins: A fully unique sculpt, a cool action feature, and four articulated legs. My only real issue is that he has some less than perfect paint applications that bring things down a bit. Still, he's a figure I could have easily seen having been a deluxe figure if he came with an extra head or something but the fact that Mattel managed to get him in the basic line is pretty cool. He's quite fun and since Mantenna isn't a character we see all of the time, he seems a bit more special. He's a Great figure and probably will be the highlight of this series for most folks.
If you're a fan of Mantenna, go stand over there and check out the MOTUC Mantenna, the Filmation inspired Club Grayskull Mantenna, the slime green M.U.S.C.L.E. Mantenna, the Funko POP! Mantenna #67, and the ReAction Mantenna and Mantenna (Toy Variant).
For more Masters of the Universe Origins reviews check out the following:
Anti-Eternia He-Man
Battle Armor He-Man
Battle Armor Skeletor
Battle Cat
Battlefield Warriors
Beast Man
Beast Man (Lords of Power)
Buzz-Off
"Buzz Saw" Hordak
Castle Grayskull
Clamp Champ
Clawful
Eternian Goddess
The Evil Horde
Evil-Lyn
Evil-Lyn (200x)
Faker
Fisto
Flying Fists He-Man
He-Man
He-Man (200x)
He-Man and Prince Adam 2-Pack
Hordak
Horde Trooper
Jitsu
Kol-Darr
Land Shark
Lords of Power
Man-At-Arms
Man-E-Faces
Maniacal Mimics
Mer-Man
Mer-Man (Lords of Power)
Mosquitor
Mysteries of Grayskull
Ninjor
Orko
Panthor
Panthor (Flocked)
Prince Adam & Sky Sled
Ram Man
Rise of Evil
Roboto
Scare Glow
She-Ra
She-Ra (PowerCon Exclusive)
Skeletor
Sorceress
Stinkor
Stratos
Stratos (Minicomic)
Stridor
Sun-Man
Sun-Man (Mattel Creations)
Teela
Trap Jaw
Tri-Klops
Tri-Klops ("The Terror of Tri-Klops!")
Webstor
Wind Raider
Wun-Dar
Zodac
Posted by Barbecue17 at 8/29/2022