Wrapping Up 2021: Eternian Goddess from Masters of the Universe Origins by Mattel 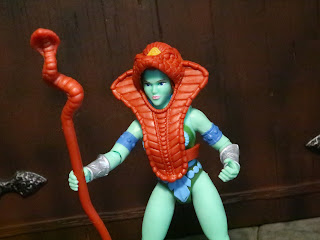 I received series 6 of Mattel's Masters of the Universe Origins for Christmas and I wanted to make sure I reviewed them before getting too far into the new year as series 6 has some pretty unique characters in it. One of the most unique is the Eternian Goddess, also known as just the Goddess, or the Green Goddess, or the Sorceress, or Teela as the deity of the Snakemen. Yeah, the Goddess is kind of all over the place. The original version of the character stems from the original vintage minicomic "He-Man and the Power Sword" in which the Goddess (referred to as "Sorceress") is rescued by He-Man. Recognizing him as a prophesized hero of sorts, she gives him the ancient treasures and weapons she has been guarding. She's completely separate from Teela though she looks like a green version of Teela wearing the armor she comes with. Over time the Goddess disappears, replaced by the Sorceress Teela-Na who was prominent in Filmation, and it's only been within the last 15 years or so that she's regained her own unique identity as Sharella, a guide and deity who protects the Power Sword and guides heroes before the time of He-Man. It seems that in the vintage toyline there were originally plans at one point for two figures, the warrior Teela and the magical Goddess/ Sorceress but being concerned about too many female figures in the line the figures were combined. Weird, huh? Anyways, the Goddess has become a popular character and since she both has roots in the earliest minicomics and she's an easy repaint of Teela Mattel included her here. Let's take a look at the Eternian Goddess after the break... 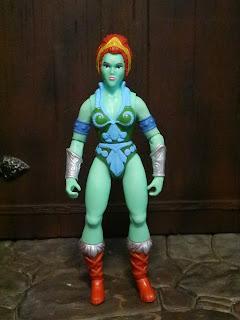 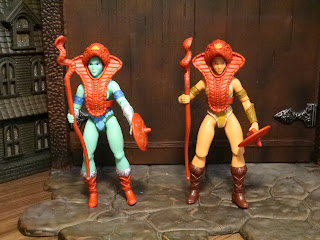 Comparison:
* The Eternian Goddess is on the left while Teela is on the right. The Goddess is pretty much a repaint of Teela though she does have the updated knee joints which are a big improvement. 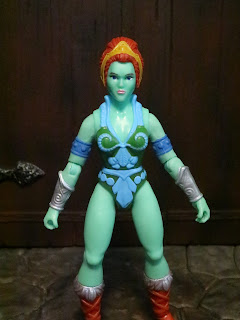 The Positives:
* The green on the Goddess looks fantastic. It's a very nice color that looks fantastic, both otherworldly yet pleasant to the eyes. Yeah, she's got the same outfit as Teela, but the colors are changed up nicely with cooler colors like blue, green, and silver for her outfit. She's meant to be displayed with the snake armor on so if you have your Teela without her armor and the Goddess with it, they ought to look quite different on the shelf. 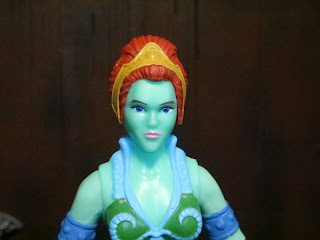 * The headsculpt looks just fine in green. I honestly wouldn't have minded a change in hair color, though, but this is still pretty solid with clean paintwork. 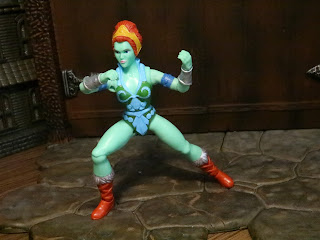 * I like the articulation used on the female MOTU Origins body. It's quite good, maybe even with smoother articulation than the male body. The Goddess moves just fine and the improved knees look much better than the previous design.
* All of the MOTUO figures are modular, allowing you to separate the limbs, torso, and head to make your own simple customs. Pretty fun stuff! 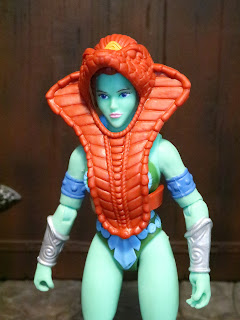 * Like with Teela, the Goddess' serpent armor is also molded from the more rubbery material Mattel is using on the Origins figures so it holds detail well and fits on the figure quite easily. Seriously, you can take this armor on and off again with little worry about it breaking or tearing. It's nice and sturdy and simple to put on. 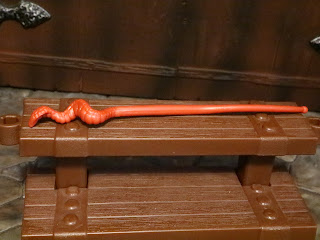 * The Staff of Ka is very close to the vintage accessory that came with Teela though the shaft is a bit thicker so the wider Origins hands can grasp it more easily. 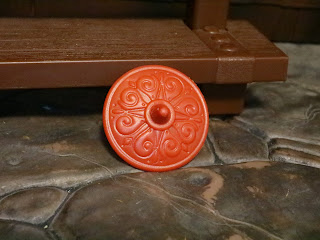 * The Eternian Goddess also comes with Teela's shield which is very similar to the vintage toy's shield. Rather than a clip on the back to fit on her wrist this shield has a simple handle for her to hold. 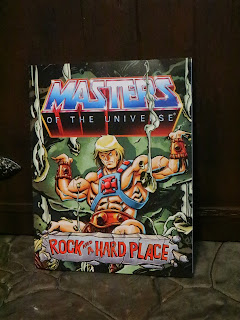 * Each figure in the series also comes with a mini comic. Yes, an actual minicomic. Each character comes with the same comic but it's a cool way to familiarize kids picking up these figures with the characters. 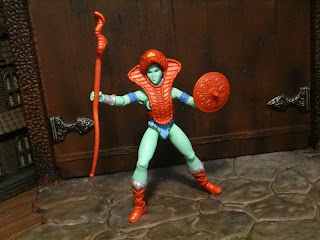 I really like this figure. I really liked the Masters of the Universe Classics Goddess figure (so far mine hasn't broken; knock on wood) and I'm glad to see the character again. This is a great way to refresh Teela while technically offering up a new character with roots back in the vintage minicomics and the creation of the line. She's a Great and a 1/2 figure and one of the best variants we've seen in the line to date.
For more of the Eternian Goddess, Sharella, check out my review of the Mega Construx Castle Grayskull as it came with an exclusive figure of the Goddess.
For more Masters of the Universe Origins reviews check out the following:
Battle Armor He-Man
Battle Armor Skeletor
Battle Cat
Battlefield Warriors
Beast Man
"Buzz Saw" Hordak
Castle Grayskull
Clamp Champ
The Evil Horde
Evil-Lyn
Evil-Lyn (200x)
Faker
Fisto
He-Man
He-Man and Prince Adam 2-Pack
Hordak
Land Shark
Lords of Power
Man-At-Arms
Man-E-Faces
Maniacal Mimics
Mer-Man
Mer-Man (Lords of Power)
Mosquitor
Mysteries of Grayskull
Ninjor
Orko
Panthor
Panthor (Flocked)
Prince Adam & Sky Sled
Ram Man
Rise of Evil
Roboto
Scare Glow
She-Ra
She-Ra (PowerCon Exclusive)
Skeletor
Stratos
Teela
Trap Jaw
Tri-Klops
Tri-Klops ("The Terror of Tri-Klops!")
Wind Raider
Zodac
Posted by Barbecue17 at 1/26/2022