Action Figure Review: He-Man (200x) from Masters of the Universe Origins by Mattel 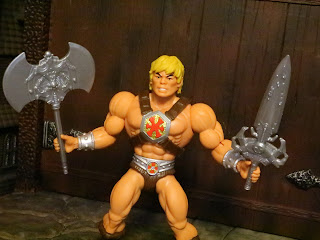 Wow! It's been almost two months since I last reviewed a He-Man figure! Let's change by taking a look at the new Masters of the Universe Origins He-Man figure from series 9. This isn't your standard vintage inspired He-Man, however; this version is actually based on the 2002/200x Masters of the Universe toyline. That's one of my favorite He-Man designs ever so I'm super thrilled that Mattel is bringing some of those designs into this line. Mattel did release a 200x inspired Evil-Lyn last year, but she was really just a repaint with no new sculpting or accessories to further differentiate her from the classic yellow figure. For He-Man and Skeletor in this series, Mattel did give them new portraits, new armor, new weapons, and one or two new sculpted bits to capture the unique look of the 200x toyline while still making the figures fit in with the rest of Origins. This series contains the 200x versions of He-Man and Skeletor, along with Mantenna and Pig-Head. All of those reviews are coming soon, but let's start with He-Man after the break... 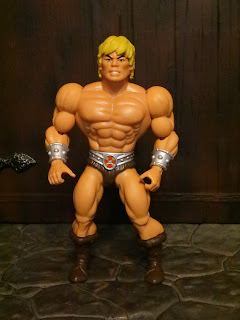 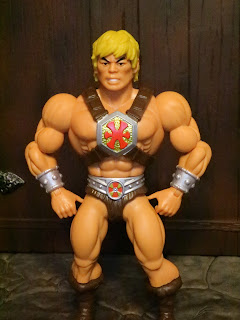 The Positives:
* Like the basic Origins He-Man, the 200x He-Man uses a standard body with the basic wrist cuffs and brown boots. The colors are different, though, with the wrist cuffs painted silver and the boots molded in brown. The biggest differences from the standard He-Man are the waist and the harness. He-Man's waist now features the classic cross as a belt buckle while the harness looks like it's made of leather with a metallic clasp in the middle. The clasp features the 200x era "asterisk" design. It honestly makes this feel like a very different and unique figure and it looks fantastic. The paint applications, while there aren't too many, are all neat and clean. 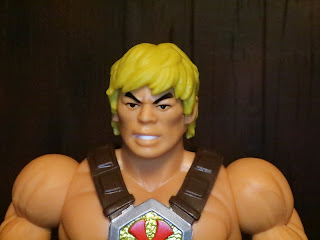 * The headsculpt and hairstyle are different as well and I think most folks should be pleased. He-Man's sporting a more modern, "messy" haircut like the 200x version, but he still looks like a classic He-Man. This is absolutely my favorite He-Man headsculpt from Origins an possibly my favorite He-Man headsculpt from Mattel since the end of Masters of the Universe Classics. I love the combination of this portrait and that hairstyle. 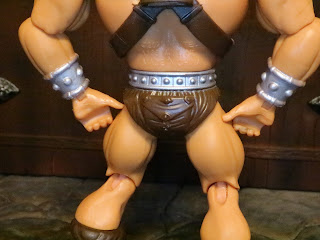 * The 200x He-Man figure had a pouch on the back of his trunks and I'm actually quite amused that Mattel added that little detail here, too. There's a pouch on his furry shorts for storing all kinds of useful goodies. He's probably toting around some gooble jerky, his Windraider pilot's license, and a wallet photo of Teela. 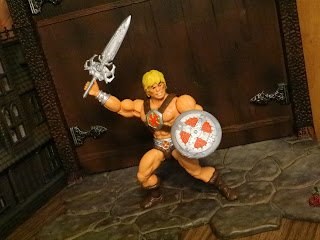 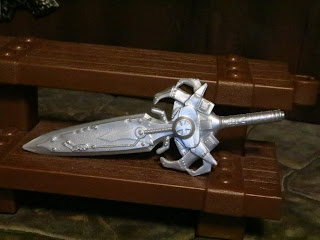 * I'm absolutely a fan of the "techno Power Sword." It's not my all time favorite or anything but I love the cool design. The original idea the Four Horsemen presented when creating/ sculpting the 2002 MOTU line was that Skeletor had captured both halves of the Power Sword and Man-At-Arms constructed a new sword to help Adam channel the Power of Grayskull. In MOTUC, the sword helped He-Man to locate the halves of the Power Sword. Mattel delivered an all new sculpt here and it looks great. Very detailed, though with no paint applications. 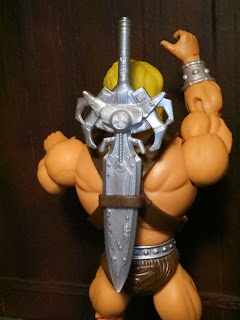 * The Power Sword or axe can fit in the slit on the back of the armor, allowing He-Man to tote one weapon around while holding the other and wielding his shield. Convenient! 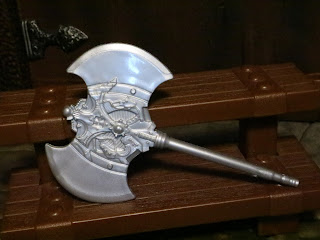 * I love this axe. Love it, love it, love it. I love the axe included with the 200x version and while this one doesn't have any paint applications, I still love it. It's a really cool, really fierce looking accessory. 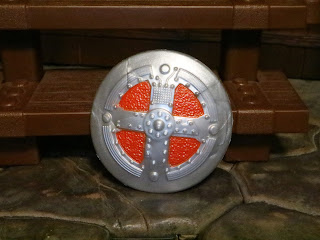 * The front of the shield is nicely detailed and the four panels do get a paint application to add a bit of color to He-Man's accessory set. 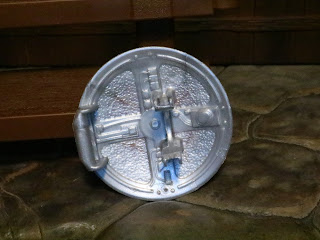 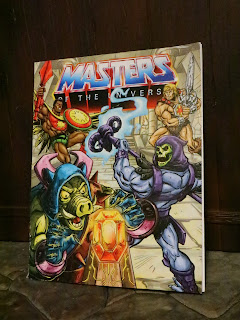 *  I'm never going to turn down a minicomic and I love that Mattel brought them back for Origins. This one features the characters from this series as well as Sorceress, Sun-Man, and a giant Cthulhu-like creature. 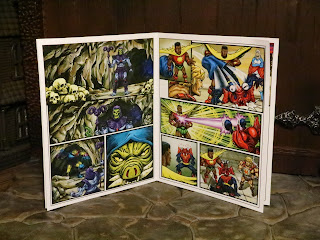 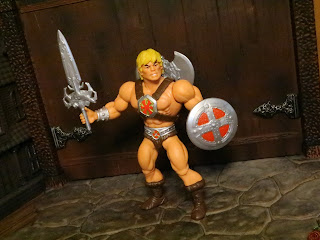 This 200x variant of He-Man is absolutely my favorite He-Man figure in Masters of the Universe Origins. He's one of my favorite Origins figures out of all of the releases so far, too. I love the merging of the vintage aesthetic with the "hyper anime detail" of the 200x line. Great accessories, cool armor, and my favorite He-Man headsculpt from Mattel in at least 5 the past five years. This guy gets an Epic from me and is well worth tracking down. It's a great way to refresh He-Man on store shelves while also offering up something new and worthwhile for fans who are picking up most of these.


I've reviewed so many action figures of He-Man/ Prince Adam that he has his own review archive. Check out Fabulous Secret Powers for all of my reviews of the most powerful man in the universe!