Action Figure Review: Maniacal Mimics from Masters of the Universe Origins by Mattel 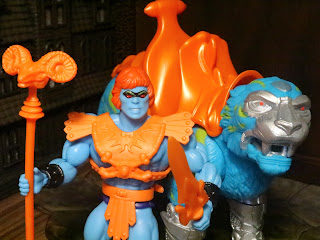 It's been a few days since the last review in my Masters of the Universe Origins mini marathon of exclusives but today I'm finally getting around to the third and final of the 2021 PowerCon exclusives: The Maniacal Maniacs two-pack with Faker and Dupli-Cat. While Faker was just released in the standard Origins line, this version is designed to look like the Leo Toys Faker variant, released in India in 1987. That's cool, but it's not the selling point of the set. That would be Dupli-Cat, a new robotic feline mount for Faker. Dupli-Cat is another cool example of the new ideas that have been springing up in Origins in 2021 which have been radically improving the line overall. This set was created for PowerCon 2021 and was sold through their site as well as through Big Bad Toy Store and Mattel Creations. It was the first of the exclusives to sell out on Mattel Creations when the PowerCon sets were released and I ended up getting mine through BBTS. Funny story: A week or so ago my daugher and I were discussing the symmetry of MOTU characters (Fisto and Jitsu, Tri-Klops and Man-E-Faces, etc.) and my daughter Adora said: "They should give Faker a blue and orange cat." I was very excited to tell her that her idea was in fact a reality and was on the way as we spoke. Ready for some fantastic mechanical menace? Then join me after the break... 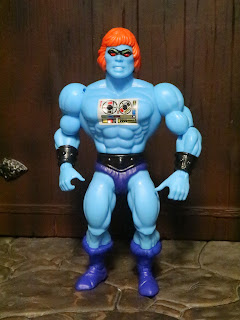 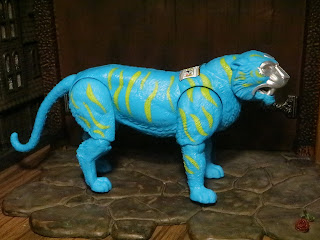 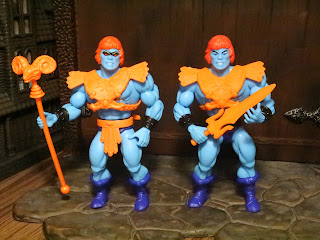 * Here's a quick comparison of the Leo Faker from this set and the standard Origins Faker. What's different on the new figure? The dark eyes on the head, the more metallic orange armor, the inclusion of Skeletor's belt, and the inclusion of the Havoc Staff. That's it. I really wish Mattel would have thrown in some more mechanical parts, too, like a more robotic looking arm or leg. That would have more sharply differentiated these two, particularly with the standard Faker being released at the same time as this variant. 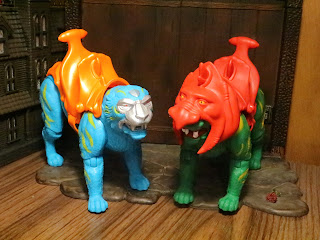 Comparison:
* And here's a shot of Dupli-Cat and Battle Cat. Both of the cats use the same body and saddle but Dupli-Cat has a new head that shows off his robotic nature. The colors of Dupli-Cat really keep him feeling unique and fresh when compared to Battle Cat and Panthor. 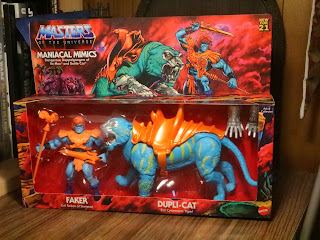 * The Maniacal Maniacs come packaged in a window box within a standard cardboard mailer with some art on it. I love how Origins uses these mailers as they seem so reflective of a bygone era of toys. The figures are nicely displayed and the art is incredible. 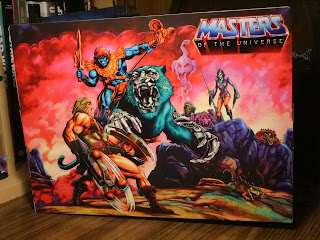 * On the back of the packaging is a huge image of Faker on Dupli-Cat facing off against Flying Fists He-Man (who is coming to Origins soon). There are also some cool images of Snake Mountain and the Horde Witch, a figure I always hoped we'd get in Masters of the Universe Classics. Maybe we'll see her in Classics at some point? 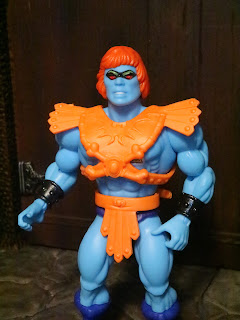 * Overall Faker does look like Faker. He's bright and colorful, although his orange armor does have more of a metallic look to it this time around. He's also sporting both Skeletor's armor and Skeletor's belt. That was something the vintage Leo Toys variant had so it's been replicated here. Otherwise, from the neck down this is the same as the standard Faker. 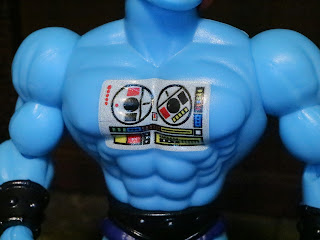 * When you remove the armor you can see the control panel hidden underneath. This isn't a sticker like the vintage toy but a printed detail like on the MOTU Classics figure. It looks quite sharp with lots of little colored doodads and such. 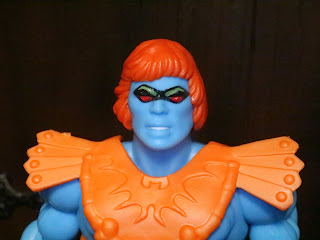 * Like the standard Faker, this Faker uses the updated vintage styled He-Man head and not the Origins head from the series 1 He-Man with longer hair and the more extreme facial expression. The only difference here is that there's what looks like a domino mask over his eyes. This is another element of the Leo Toys Faker and it definitely makes Faker looks a bit more frightening. 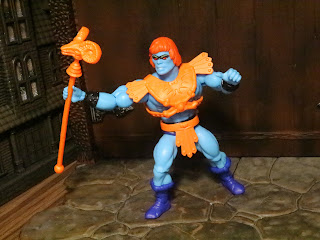 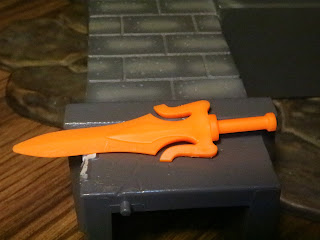 * Faker comes with the Alfredo Alcala inspired Power Sword from the early minicomics but molded in orange. The handle has been redone from the first appearance of this sculpt in Origins so it's easier to hold than the handle. 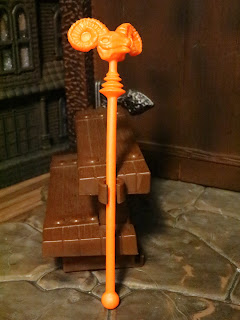 * Faker also comes with the Havoc Staff molded in orange plastic. This is the last unique element of the Leo Toys Faker and it nicely completes Faker's accessories. 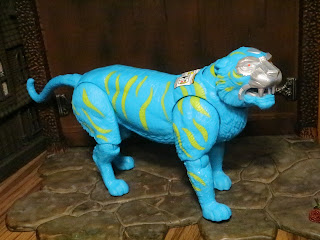 * Dupli-Cat mostly uses the same molds as the Origins Battle Cat and Panthor figures but with a new head. It's a pretty good sculpt that definitely retains the look of the vintage toy but with slightly better muscles and fur. I like the yellowish stripes, too. It definitely makes for a very unusual look.

Adora says: "I like how the lines for Dupli-Cat are in the exact same places as Battle Cat. 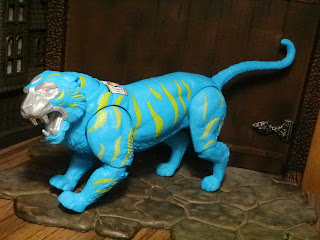 * Since he uses the same body as the previous cats, Dupli-Cat has the same articulation. You can have some fun with this one, especially with his mobile head, tail, and legs. It's still weird that there aren't any ankle joints but everything else works nicely and Dupli-Cat feels solid and durable. 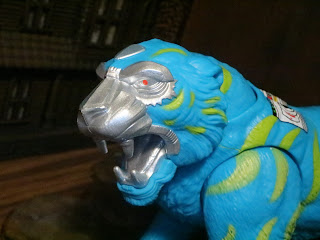 * It wasn't until I actually got this guy in hand that I realized he had a completely new headsculpt. I guess from images I had seen I just thought he had silver paint on the standard cat head. The head is new, though, and shows off mechanical features in and around his face and mouth. Dupli-Cat has a functional jaw, too.

Adora says: "The red dots in his eyes make him look more mechanical." 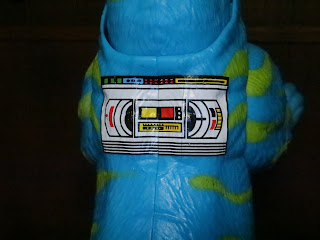 * On his back, underneath his saddle, Dupli-Cat has a control panel as well. It's a cool nod to Faker's chest panel and looks similar, but different. The design kind of looks like an old VHS tape, doesn't it? 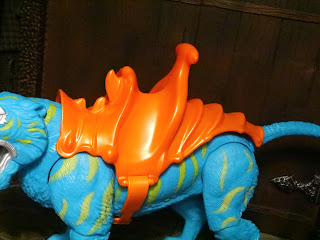 * Dupli-Cat's saddle is the same as the other saddles but molded in a metallic orange, like Faker's armor. It's quite bright and fits on his back nicely. You can put Faker on here with ease. 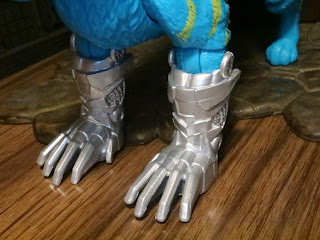 * Rather than a helmet Dupli-Cat comes with some really wicked looking mechanical claws. They pop on and off but do stay on very securely, so no worries about them just falling off in the middle of battle. These are really cool and I do wonder if we'll see them again as some point down the road. Maybe for a 200x styled Battle Cat or Battle Lion? 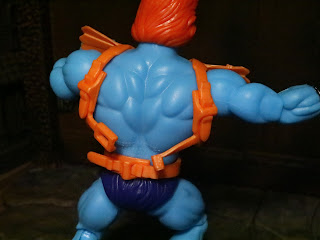 * My only negative here is that the Skeletor harness just doesn't seem to fit properly on the figure. It seems a little small. You can close the snap but it'll pull loose shortly afterwards on its own. I had this same problem with the standard figure, too. 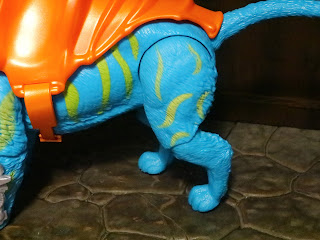 * The addition of articulation to cat body in this line is very welcome but the articulation feels very limited and kind of pointless in places. Why go with plain swivel hips instead of balljoints or swivel/hinges? Why not give the cats hinged ankles? He may be articulated but he doesn't feel very poseable and getting him into any sort of pose just feels frustrating. 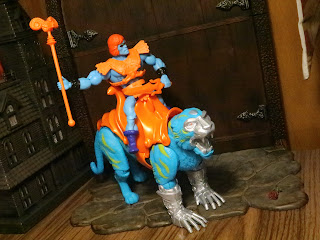 While you pay an exclusive tax on this set, at $60 dollars it doesn't feel as egregious as some previous exclusives have. Getting a cat and a rider at the same time is pretty cool, especially when it's an all new character like Dupli-Cat. I love his design and, despite a couple of my issues with the cat body in Origins, he's the star of the set. I love the Leo Faker but considering that the standard Faker is on shelves I do wish this guy felt a little different. Including some more mechanical looking limbs for Faker, or something else to differentiate him more from the standard figure, would have been nice. This is a Good and a 1/2 set, though, and it seems to be the most popular of the three convention exclusives due to Faker's cult following.

Email ThisBlogThis!Share to TwitterShare to FacebookShare to Pinterest
Location: 4QX45V4C+36