Action Figure Review: Snout Spout from Masters of the Universe Origins by Mattel 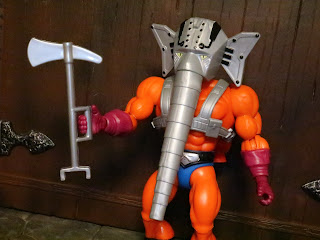 Snout Spout is definitely one of the goofiest Masters of the Universe characters out there, particularly when you only count characters who have appeared in more than one piece of MOTU media. Yeah, there are goofier characters who only appeared in the Fimation series for an episode but Snout Spout was in the vintage toyline, three episodes of the Filmation cartoon She-Ra: Princess of Power, comic books, and even received a Staction in the NECA MOTU line. He's a cybernetic firefighting elephant who squirts water from his trunk. The 1986 line definitely had some crazy characters. I remember getting him for Christmas as a kid, probably somewhere between 1986 to 1988 (I was really young), so I've always had him around. I didn't think Snout Spout would need to be a deluxe figure but Mattel did manage to retain his action feature from the vintage toyline and also gave him two portraits. Not bad for Hose Nose, right? I mean Snout Spout. Let's check him out after the break... 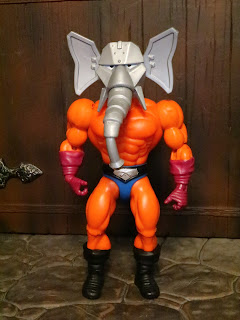 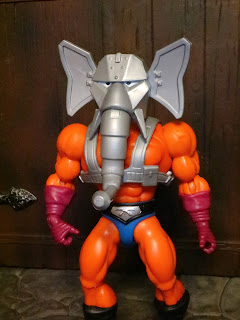 The Positives:
* Snout Spout will without a doubt stand out on your shelf. His bodysuit is a bright reddish orange and he's sporting maroon gloves and a silver harness with lots of cool little pouches on it. Oh, and he has a giant robotic elephant head. We'll get to that in a minute, though. I could definitely see Snout Spout wearing a pretty common outfit for a member of the Eternos firefighting brigade. Maybe he can team up with Barbecue, Inferno from C.O.P.S., and Inferno from G.I. Joe: Sigma 6 (who I'm pretty sure was meant to be Barbecue). 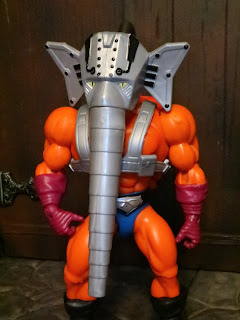 * Since he's a deluxe figure Mattel included two separate portraits with him. The first portrait is based on the vintage figure and has yellow eyes and lots of painted technical details on the headsculpt. Snout Spout also has a longer snout here as this one can actually shoot water. I'll get to that in more detail in a minute but this head is attached to a black rubber tube and a red backpack for holding the water, so there's no built in reservoir on the Origins Snout Spout like the vintage figure had. The snout is somewhat flexible, allowing you to aim the hose nose. 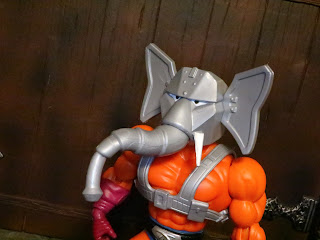 * The second headsculpt for Snout Spout looks to be based on his appearances in the She-Ra: Princess of Power animated series and in the He-Man and She-Ra Christmas special. It's a simpler portrait in some ways but I like the look of the eyes and the curved trunk better on this one. He looks a bit fiercer with those angled eyes. 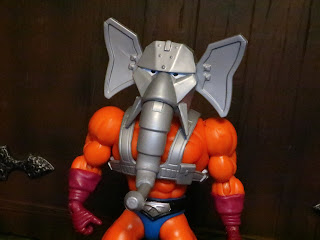 * Snout Spout's trunk is articulated via a swivel/hinge joint, so you can pose it and keep it in place. It works well and I love this feature on him! 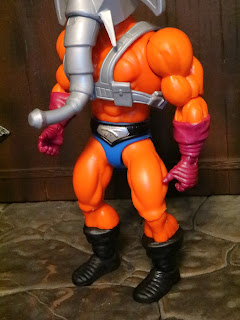 * I really though Snout Spout could probably use a basic body but Mattel made sure to throw in quite a few new parts that capture the full look of the vintage toy. Specialty boots and gloves as well as a new waist piece with the unique fire tool belt buckle definitely show the effort that was put in Snout Spout. 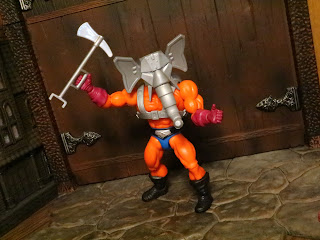 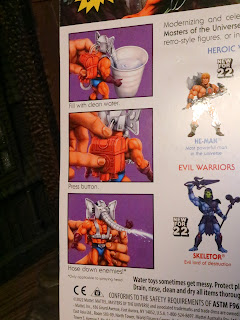 * Here's a shot of the back of Snout Spout's packaging which shows how the action feature works. Essentially you use the backpack to suck water in through the trunk and then squeeze it to launch the water back out. I didn't actually try it on mine but it seems like it'd work just fine. It's kind of fun seeing the action features returning to MOTU in the Origins line. 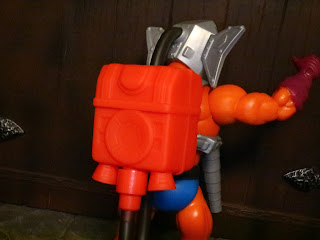 * Here's the backpack/reservoir that attaches to the back of Snout Spout's harness. It's nicely detailed and looks similar to the vintage toy's sculpted on backpack, though it is much larger. 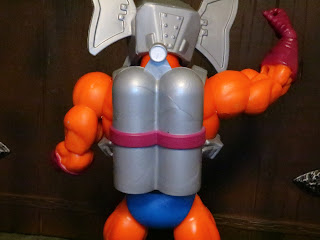 * If you're going with the Filmation inspired head then Mattel also included some tanks inspired by Snout Spout's appearance in the cartoon. They snap on his harness easily and stay on quite securely. 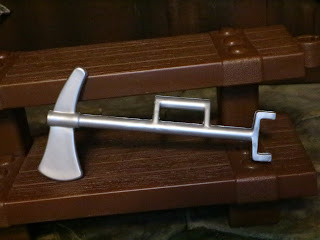 * Snout Spout is also geared up with his specialty axe for fire fighting and rescue. It's got the blade on the top and a prybar like device on the bottom. 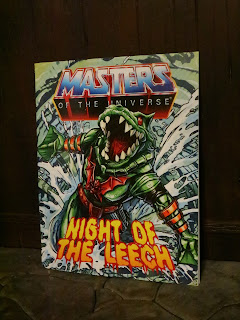 * The Origins figures all come with some pretty cool minicomics and Leech and Snout Spout share Night of the Leech. 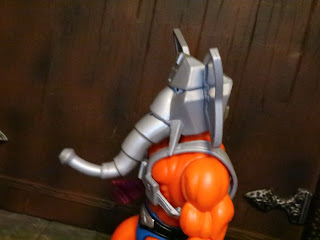 The Negatives:
* My only negative with Snout Spout is that since his heads are a bit trunk heavy, they tend to lean forward. The balljoint doesn't hold them in place as securely as I'd like. You can work around by repositioning the hose on the vintage head or by using the trunk articulation on the Filmation head, but it's still a flaw. 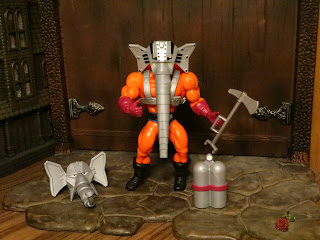 Snout Spout turned out really well. Really, really well, especially for one of the less popular vintage characters. Mattel easily could have stuck him in the line as a basic figure with his backpack a molded piece and just including his axe but they really went above and beyond to create a figure that should please most MOTU fans. If you've been wanting a Filmation inspired Snout Spout/ Hose Nose, this ought to make you quite happy. He's an Epic figure and it's really fun to see him here since Snout Spout doesn't always get the most attention.

If you're a fan of Snout Spout check out my reviews of the 200x inspired Snout Spout head from the MOTUC Heads of Eternia set and the Funko Vinyl SODA Snout Spout.