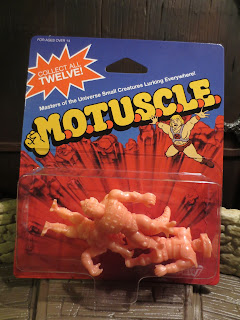 Today I'm looking at the last of the four 3-packs from series one of Super 7's M.O.T.U.S.C.L.E. line. There's not much more to say about these than what I've said over the past few days: They're M.U.S.C.L.E. styled figures based on the Masters of the Universe cast. They're nicely priced at $6 a pack ($2 a figure), they're sold as set assortments (as opposed to random or blind bagged packs), and they're nicely sculpted. Hopefully Super 7 keeps these coming since these appeal to both MOTU fans and fans of plastic minifigures in general and should please a number of customers. Today I'm looking at the second set of villains: Whiplash, Tri-Klops, and Mer-Man. Ready for a closer look? Then join me after the break... 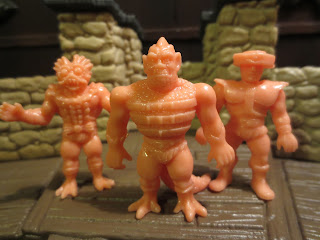 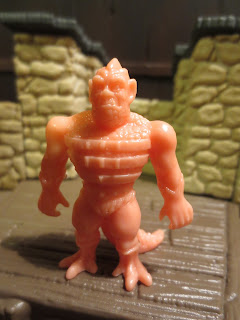 *Whiplash is an excellent mini. His character design and the bulkiness of the sculpt really play well with the M.U.S.C.L.E. aesthetic. The tail on the back is a great feature and his skin texture is quite detailed. 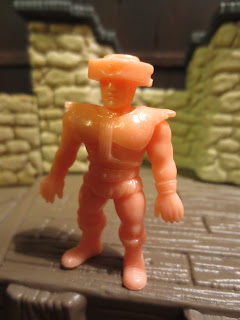 *I like Tri-Klops although I'm a bit perplexed as to why Super7 opted to not include his sword as part of the sculpt. Teela, He-Man, Man-At-Arms, and Skeletor got their weapons while everyone else didn't. Regardless, this is still a fine sculpt with some excellent details. It's incredible how well Super 7 captured the details of the vintage figures. 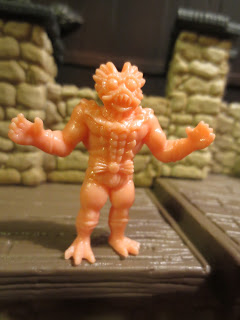 * I love Mer-Man! He looks so crazy! The pose is great and I love his open mouthed look. He really fits well into the M.U.S.C.L.E. aesthetic, too. 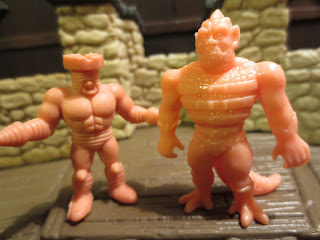 *One of the cool things in this set is that Whiplash and Mer-Man, due to their bulkier frames, look much better in the M.U.S.C.L.E. aesthetic. Some of the figures look a bit too slender but not these guys. 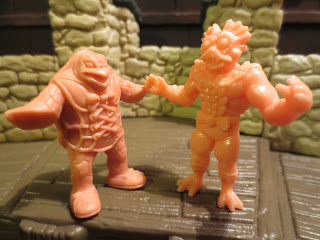 *I hope in the future Super 7 tries a bit harder to match the color of the plastic to the traditional M.U.S.C.L.E. standard pink. These guys are quite shiny and end up looking a bit like some of the knock-off M.U.S.C.L.E. figures we found in vending machines as kids. 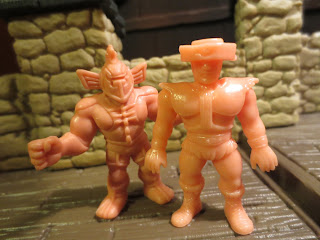 *These guys are just a but too rubbery. They're not full on squishy but the texture is definitely closer to Monster in my Pocket than M.U.S.C.L.E. Hopefully future releases will correct this issue as it also affects how securely these guys can stand. 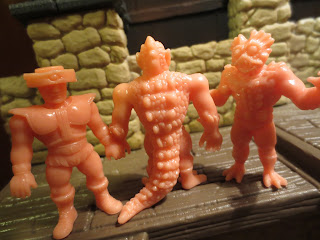 Interestingly, I think the guys in this set work much better than the other sets. Perhaps it's due to the character designs or due to the bulkier frames but these guys blend in with true M.U.S.C.L.E.s stylistically much better than the rest. Overall I'm giving this set a Good and a 1/2. I still want to see the problems with the plastic and colors corrected, but I'll still continue to pick these up. I'd love to see this line really expand. Heck, I'd love to see these guys molded in various colors (this set would really work well in green as it would tie into the color schemes of all three characters). While I've now reviewed all four sets, I've still got one more special review for tomorrow to offer up related to M.O.T.U.S.C.L.E. Check it out!

I've reviewed the other three sets of these as well as plenty of other MOTUC figures: