Action Figure Review: Sun-Man from Sun-Man: Rulers of the Sun/ Masters of the Universe Origins by Mattel 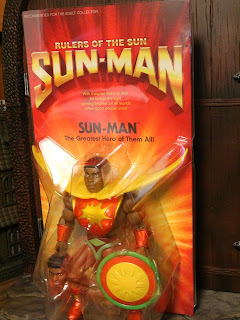 Today I'm very excited to check out the Mattel Creations exclusive Sun-Man figure. Released as part of the Masters of the Universe Origins line, Sun-Man is actually the star of his own property and was the flagship figure for Olmec Toys. Created by Yla Eason in 1985, Sun-Man was her response to a comment made by her son that he couldn't be a superhero because he wasn't white (some sources record the comment being that he said that it was because He-Man was white). Rather than just take him to McDonalds or buy him a black action figure from some other toyline (she tried but couldn't find one at the time), Yla Eason started a company and created a toy for her son. Dang. That's better than those kids who get a pony. Besides being a milestone in black representation in toys and action figures, Sun-Man has also developed a cult following since he was clearly based on the Masters of the Universe style. Over the years these various toylines designed to "play along" with Masters of the Universe have grown in popularity and collectability and it was a pretty cool surprise last year to learn that Mattel had partnered with Eason to revive the Sun-Man and the Rulers of the Sun property, connecting it with Masters of the Universe. Sun-Man is currently appearing in stores in the standard MOTU Origins line and will also show up later this year in Masterverse but this special version pays tribute to the vintage Sun-Man figure by giving him a backer card reminiscent of the vintage toy. Ready to check out this special edition of Sun-Man? Then join me after the break... 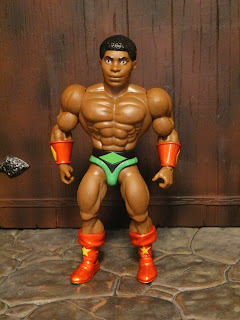 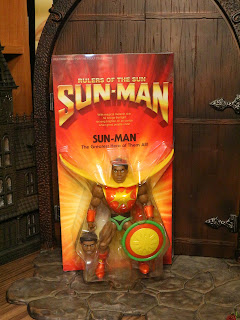 * I'm including the packaging in the positives because it not only looks incredible but it is collector friendly. The packaging is designed like the PowerCon exclusive She-Ra in that it is designed so you can remove Sun-Man from the package without damaging the blister or the backer card. The blister folds over the backer card, kind of like a Mythic Legions figure. The only irreversible think about taking Sun-Man out of the package is removing the plastic fasteners that help hold him in the bubble for shipping. Sun-Man was released in multiple different packaging designs over the years the vintage toy was available and this one looks like a blend of a few of the packaging variants. While the standard figure will come on a Masters of the Universe Origins card, this one gets to receive top billing with the Sun-Man and the Rulers of the Sun logo. 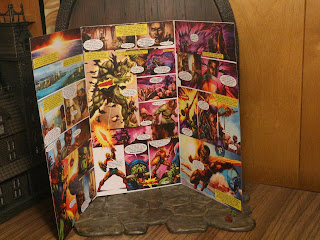 * The back of the cardboard blister folds out to reveal a 3-page minicomic that explains Sun-Man's world, his powers, and his rivalry with Pig-Head. It's pretty cool and definitely makes me interested to see what Mattel does with this character in the future through their collaboration with Olmec Toys. 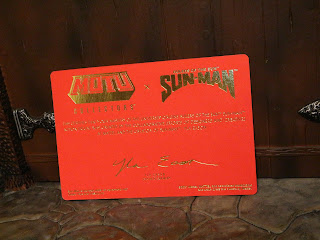 * Last up is a simple cardboard certificate of authenticity with a foil embossed signature from Yla Eason. It's a neat little piece that definitely helps to make this piece feel very, very special. 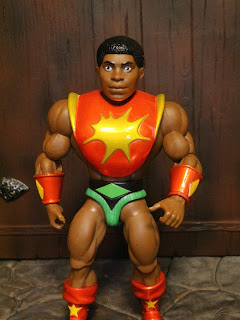 * Now, let's finally get around to checking out Sun-Man. He looks pretty good and does a great job of capturing the appearance of the vintage toy but in the Masters of the Universe Origins style. It's doubtful that most MOTU fans have ever had the chance to hold a vintage Sun-Man figure (I haven't) so having this guy available is a welcome treat. he's wearing some shiny armor that is covered with a stylized sun on the front. His bracers are new and look really cool. He's an eye-catching figure for sure. 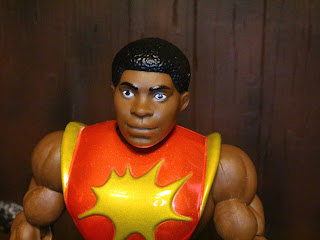 * Sun-Man comes with two portraits, the first of which is a friendlier portrait. Apparently the vintage Sun-Man was modeled after Yla Eason's son and this one captures the look of the vintage toy fairly well. There were a few different versions released over the years, including one with a flat top that's pretty cool looking. I've heard many comments that Sun-Man looks like Kenan Thompson and, well, yeah, he totally does. 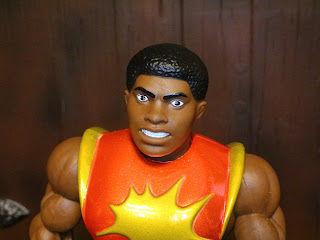 * The second portrait depicts Sun-Man in battle and definitely makes for a more Masters of the Universe-ish feel. He looks ready to team up with He-Man and simultaneously throw Skeletor and Pig-Head into the moat outside of Castle Grayskull. 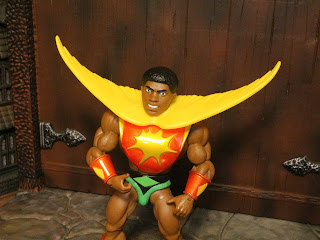 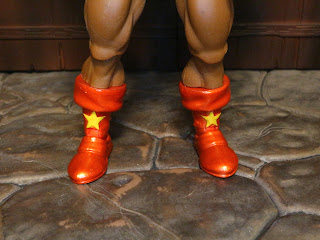 * Sun-Man has some fantastic footwear. Check out his shiny red boots with stars on them! His costume definitely borrows from both the MOTU aesthetic and traditional superhero style to make something pretty wild and unique. 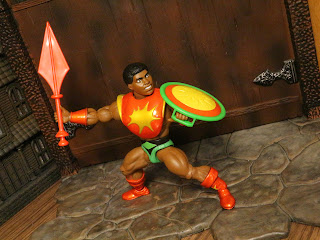 * Sun-Man is built the same as the rest of the MOTU Origins figures, meaning he has the style of the vintage toys but with more modern articulation. While their bulky frames make the articulation a bit clumsy, the figures do feel like an evolution of the vintage line. Imagine what you would get if you mixed a vintage MOTU (or Sun-Man) figure with a MOTUC figure. They're quite fun to play with.
* They're also modular. and can be easily separated to make your own lazy boy customs! 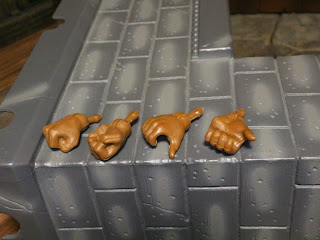 * Sun-Man comes with two pairs of interchangeable hands: A set of fists and a set of standard grips for holding his accessories. 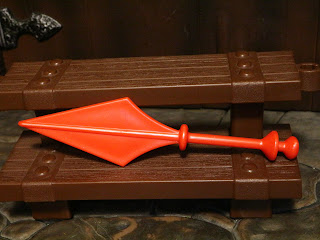 * I'm really liking Sun-Man's sword. Apparently it might not be a true sword (Sun-Man was depicted as very non-violent when he was first created) but it definitely looks like it could do some damage. It's actually intended to channel the power of the sun. That's where Sun-Man gets his power from, kind of like the Dayman. He's also a champion of the sun. 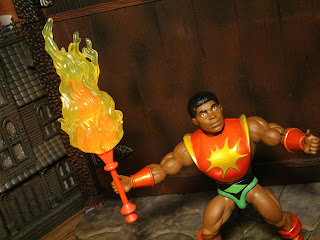 * To show off Sun-Man in the process of harnessing the power of the sun Mattel included a cool energy effect. It slides over his sword and looks pretty cool. I love the fiery look of this piece. Mattel's doing a great job including energy effects with the Origins figures and it really enhances them. 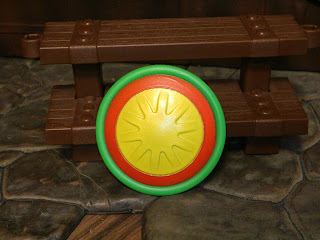 * Last up is Sun-Man's shield with an image of the sun on it. Nice colors that match the rest of his outfit. He can also hold it easily. 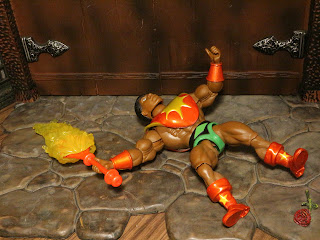 The Negatives:
* My only negative is that the energy effect on Sun-Man's sword is a bit heavy. It's pretty tough to keep the figure standing when using this accessory. You might have to find a special stand or something to keep him holding it up. 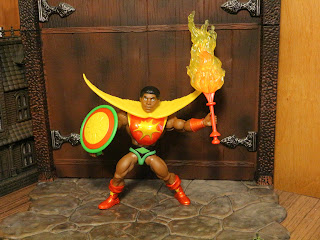 This deluxe version of Sun-Man turned out to be very nice. While I'm sure many fans will be happy with the standard version, it's pretty cool that Mattel released this more deluxe version with alternate portraits, hands, and the solar energy effect plus an actual Sun-Man and the Rulers of the Sun package rather than just a MOTU Origins card. Making it resealable is really cool since it's so unique. It seems like Mattel has more plans for Prince Sunni and his allies and enemies in Origins and this is definitely an Epic tribute to him and a warm welcome to the world of Eternia.