Action Figure Review: Stratos (Minicomic) from Masters of the Universe Origins by Mattel 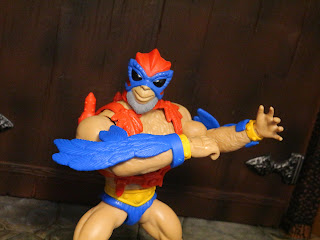 Today I'm wrapping up series 7 of Mattel's Masters of the Universe Origins and it's time to take a look at the figure I was the least excited about in this series: Stratos in his minicomic colors. I'm not the biggest Stratos fan (though I love his Sean Conneryesque voice in the Mike Young Productions series) and I was kind of disappointed that we were getting another Stratos already as he just came out in series 4 last spring, but in hand the colors on this figure are really pretty cool. Based on the early minicomic appearances and Mark Taylor's early color schemes for the character, this version of Stratos has a tan body. It's an unusual look but it does have a historical basis and it was how Stratos appeared in his lone appearance as one of the Evil Warriors in the minicomic "He-Man and the Power Sword." Super7 also released this variant (a more accurate version, too) in Masters of the Universe Classics, but this is Mattel's first crack at the guy if I'm correct. Let's soar with Stratos after the break... 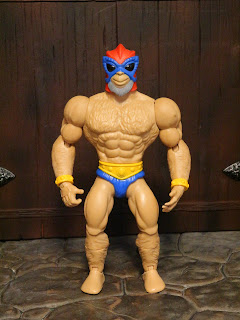 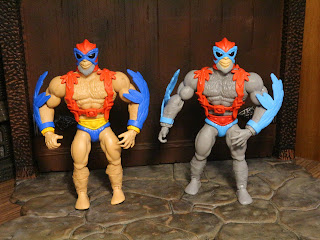 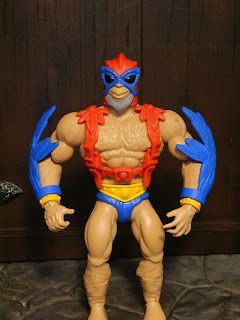 * Stratos' colors are much brighter and vivid here and I actually kind of like this version better. Yeah, despite being just a more naked version of Stratos, this version is a bit more eye-catching. I like the yellow on the belt and the cuffs (the cuffs weren't painted on the standard release). He uses the hairy body so he's extra scruffy and manly looking. Rugged! 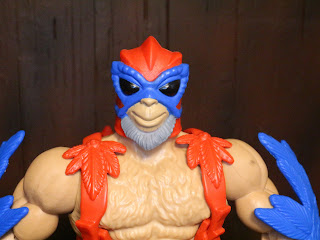 * Like the previous release, Stratos' headsculpt is pretty good. It's a little more exaggerated than the vintage figures but I like it. It just has more character to it than most Stratos figures. The beard stands out quite well, too. It actually looks better with the tan colored face and body. 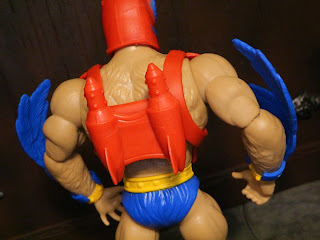 * Stratos' armor is removable and he has his classic jetpack on the back. Here's another MOTU character who has to use a device to augment what should be natural abilities! I love the retro sci-fi aesthetic on the jetpack. It's very cool. 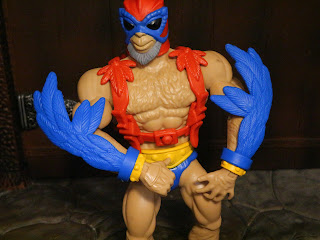 * Stratos is also packing wings. Two of them, in fact! They're blue, feathery, and they snap easily on his wrists. They're vital to his look but since you can take them off I guess they count as an accessory, huh? 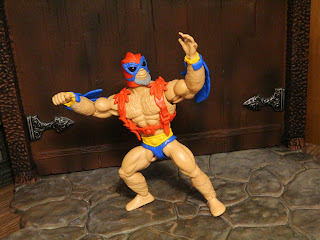 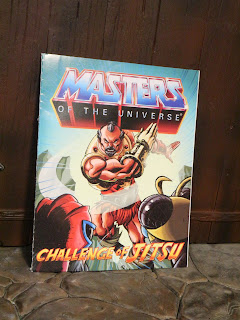 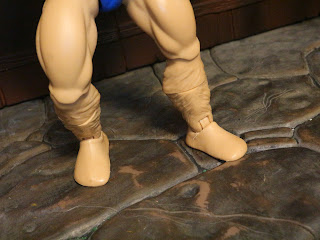 * Like Beast Man and the previous Stratos, this guy still has plain feet that just look like he's wearing socks or footie pajamas. I don't think anyone would minded if they had gone with a more animal-like foot to use on Stratos and Beast Man, or at least a foot with more detail. These are the little improvements that need to happen in this line. 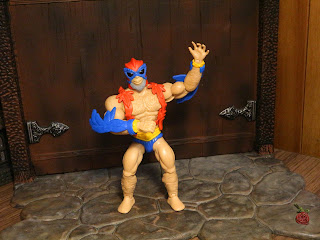 You know what? I really like this guy. Way more than I thought I would. He's still the weakest figure in series 7 but overall series 7 is a pretty strong series. He's Great, really. I think there's something about the unusual look and the red, blue, and yellow color highlights that brings new life to the figure. He's not going to be everyone's cup of tea but I'm actually enjoying him quite a bit. It sounds like the next figure scheduled for a repaint is minicomic Trap Jaw who is rumored for series 9 (I guess you could count Anti-Eternia He-Man, though I think of him as a unique character). He doesn't get us any closer to completing the vintage line but this Stratos variant is quite nice.

If you're a Stratos fan then check out my review of MOTUC minicomic inspired Stratos, Trap Jaw, and Prince Adam, the Origins Stratos, the M.U.S.C.L.E. green Stratos from series #2, the minifigure Stratos from the 200x Heroes Vs. Villains Gift Pack #1, the Mega Construx Stratos and the Mega Construx Heroes Stratos, the ReAction Stratos (Blue Wings), the deluxe Play Set from Colorforms, the Monogram International Stratos bag clip, the Club Grayskull Stratos, and Super7's Neo-vintage Stratos.