Action Figure Review: Wun-Dar from Masters of the Universe Origins by Mattel 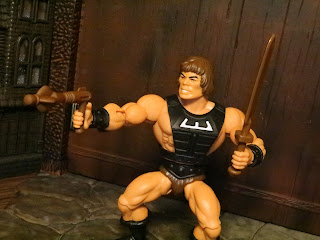 Wonder Bread He-Man. Wun-Dar. Savage He-Man. No matter what you call him, the brown haired He-Man has long been one of the most mysterious figures in the history of toy and action figure collecting. Long believed to be a mail-away promotional item from Wonder Bread (he wasn't), an early prototype for a Conan based toyline (nope), an early version of Prince Adam, a recolored figure for Asian markets, or just a flat out hoax, back in 2020 the mystery was seemingly solved when former brand manager Scott "Toy Guru" Neitlich found a series of correspondences that seem to definitively identify this figure as "Special Edition He-Man." According to the letter addressed to from an upset mother, Barb Hackenburg, the figure was received by her son and nephew as part of a "buy 3, get 1 free" Mattel promotion but disappointed then because it was a figure they didn't recognize who came with no weapons or armor. From follow up letters from Mattel President Ray Wagner and Mark Ellis, Vice President of Marketing, it does seem the idea was to create a unique figure that kids wouldn't already have when they ordered for this promotion. It may have just been a cheaper was to make a new character that kids presumably could outfit with extra accessories they had. I mean, the 1982 G.I. Joe toyline shared headsculpts between multiple characters (Short-Fuze, Flash, Hawk, and Steeler; etc.) so maybe Mattel just thought this was an easy way of making a new, more generic figure and offering up something new?
While the mystery has seemingly been solved, fans still have a passion for the incredibly rare figure. Named Wun-Dar in Masters of the Universe Classics (due to early speculation about his connection with a Wonder Bread promotion), Wun-Dar, the Savage He-Man, has become a character with his own story who even appears in Masters of the Universe: Revelation. This Masters of the Universe Origins version was sold as a Mattel Creations exclusive. It was kind of a disaster, though, as many of the figures seemed to leak out well before the figure was even announced (presumably they "fell off" the truck) and then on the day of sale he sold out in less than 2 minutes. Maybe even less than 1. According to the Origins team, they claim they didn't realize how popular he'd be. I'm not sure whether or not I believe that but it's possible those figures that seemed to show up early maybe have really depleted the supply for sale. I got an order in on a second batch but it was cancelled shortly afterwards. I finally managed to get one, though, so let's take a look at Wun-Dar, the Savage He-Man, after the break... 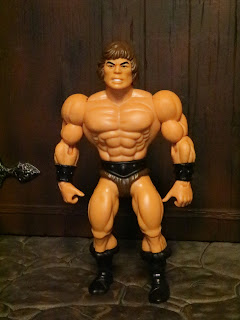 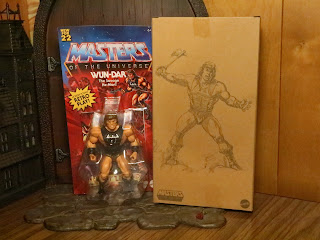 * Like most of the other Mattel Creations Origins, Wun-Dar comes on the standard card with some great art on the front and back. He also comes in a cardbard mailer with some nice line art on both sides. If you're planning to keep him in the package there are a few nice options for displaying him. 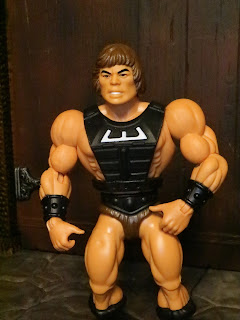 
* While he's a mysterious and expensive vintage figure, Wun-Dar is really quite plain. It seems that the true mail-away Special Edition He-Man didn't even come with armor; folks probably had the black Zodac armor sitting around from the Weapons Pak and popped it on him. After awhile people just assumed that's what the figure originally came with. So he's just He-Man with black Zodac armor, black wrist cuffs, a black belt, and brown trunks. You know what? I still love it. He looks fantastic and just really appeals to me. Mattel did a good job with this guy, even though he's a simple repaint. 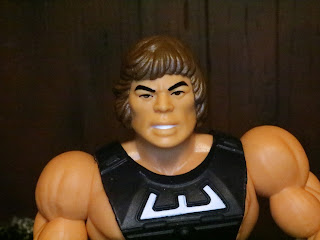 * Mattel gave Wun-Dar the "retro" styled head, which was a good call. Odds are that most of us will never own a true vintage Savage He-Man, so this is a nice consolation prize. I like the brown hair on He-Man. Hey, General Hawk went from having blonde to brown hair so why not He-Man? 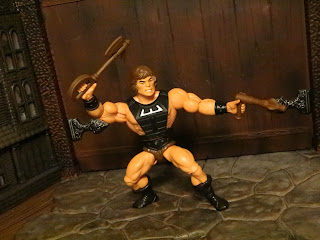 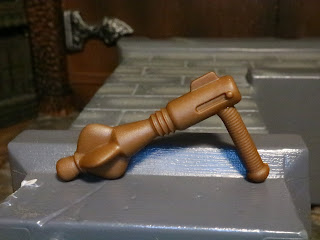 * Mattel gave Wun-Dar brown weapons instead of maroon. I like the difference as it makes this version a bit more unqiue. The MOTUC Wun-Dar was sporting a black version of Zodac's pistol (which originally came from the 1984 Weapons Pak) but this Wun-Dar has a brown laser pistol. 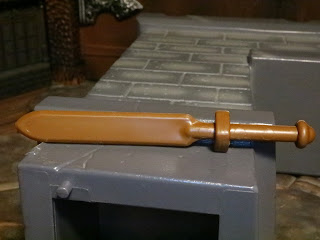 * At least one sample of Savage He-Man in a bag has the maroon Grayskull weapons rack sword and axe with it, so Mattel included those here. They're molded in brown plastic, though, matching Wundar's trunks. 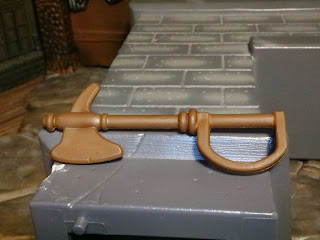 * Here's the axe. It's a cool piece and works nicely with Wun-Dar while also separating him from He-Man. 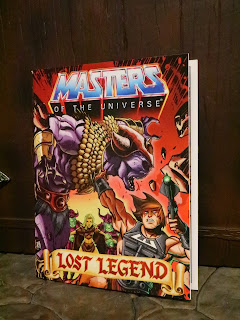 * Wun-Dar's minicomic is longer than the others in the line (it's a 10 page story as opposed to 6 pages) and it's pretty cool. It has the Goddess/ Sharella in it, the glowing skeleton warriors, and Moss Man. It kind of blends together the Wun-Dar and Oolar characters but it works quite well and it a solid minicomic. 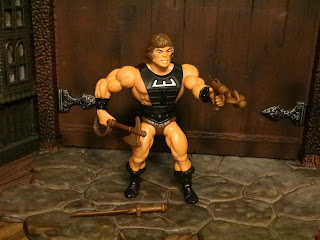 Wun-Dar turned out really well, especially for a rather simple repaint. His accessories are nice, the packaging definitely adds something to the figure, and the minicomic is really well done. I'm loving it! Wun-Dar is a character/ design that I really like and I'm thrilled he's finally been released in Origins. I'd love a Masterverse version from MOTU: Revelation as well. This is a Great and a 1/2 figure and while he was a pain to get, he's nice to finally have in the collection. He'll look great alongside the upcoming Eternia, won't he?