Action Figure Review: Rattlor from Masters of the Universe Origins by Mattel 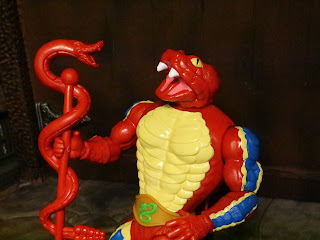 The Snake Men have finally arrived in Masters of the Universe Origins! Skeletor'ss crew has been very well represented and the Evil Horde has had over half of their vintage crew in the line, so now it's the Snake Men's turn! Series 11 introduces the first two Snake Men to Origins, Kobra Khan (who was first an Evil Warrior then a Snake Man) and Rattlor, and it's Rattlor who I'm checking out today. Rattlor (AKA the General, AKA Slltyo of the Rattlor House) was one of the first Snake Men and was King Hiss's second in command in the MYP animated series. He definitely seems like a pretty serious fellow and I'm happy to say that Mattel did a great job translating the vintage toy into the Origins line. Ready for a quick strike from Rattlor? Then join me after the break... 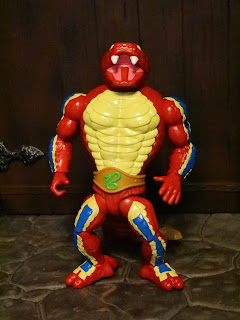 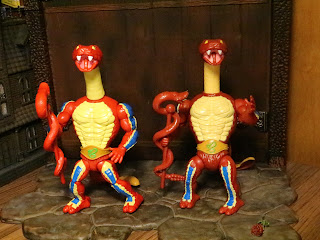 * The MOTU Origins Rattlor is on the left while the vintage is on the right. They really do look pretty similar with the biggest differences being the articulation schemes and the colors. Like most other MOTU Origins figures, Rattlor is brighter than the vintage toy. He also doesn't have a true action feature. Rather than his head and neck springing out of his body, the neck is a separate piece that connects the torso and the head. 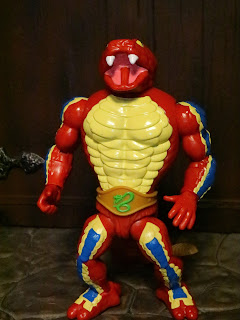 * Rattlor had a unique body in the vintage line and Mattel has made him completely unique here, too. Besides just being covered in scales, Rattlor has a rather uniquely shaped body, particularly the torso. I imagine the vintage figure was designed that way to hold the mechanics for Rattlor's spring out neck action feature but here it just makes him look odd and snakier. The belt looks fantastic and the colors are vibrant and really pop. 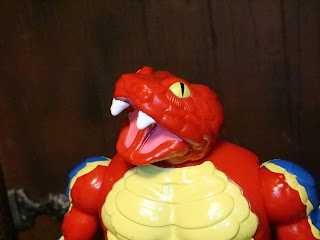 * Rattlor's head is pretty faithful to the vintage head with some yellow, bulgy snake eyes and some nasty looking fangs. If you have Ophidiophobia, you might get the creeps just looking at this guy. 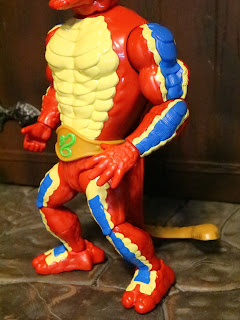 * The scaly arms are really well detailed and the painted scales just look fantastic. Rattlor is a great looking figure who is just a lot of fun. Seeing how well he turned out gets me excited for the other Snake Men like Tung Lashor and Snake Face with some interesting color patterns. 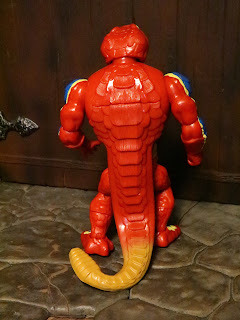 * Like the vintage toy, Rattlor has a rubbery tail and a built in rattle. Just shake Rattlor and you can hear the little plastic beads inside of him rattle menacingly at his enemies, giving off a threatening warning! 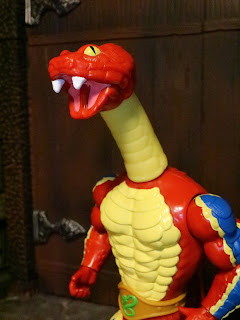 * Instead of a pop out neck, the MOTU Origins Rattlor has an additional neck piece that you can place between the torso and the head. It works quite well and while it isn't as fun as the vintage action feature, it work well and adds a bit more articulation to the figure. I'm kind of surprised that Rattlor wasn't a deluxe release with a working action feature, a second portrait, and his armor from the 200x line, but this is still a very solid figure. 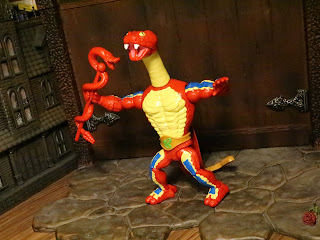 *  Even though he has a completely new body, Rattlor's general construction is the the same as the rest of the MOTU Origins figures, meaning he has the style of the vintage toys but with more modern articulation. While their bulky frames make the articulation a bit clumsy, the figures do feel like an evolution of the vintage line. Imagine what you would get if you mixed a vintage MOTU figure with a MOTUC figure. They're quite fun to play with.
* They're also modular. and can be easily separated to make your own lazy boy customs! 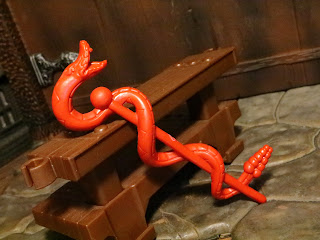 * Rattlor comes sporting his Snake Man staff in a very deep red, just like the vintage toy. It's an odd weapon for sure but it is accurate to the original with some very crisp detailing. 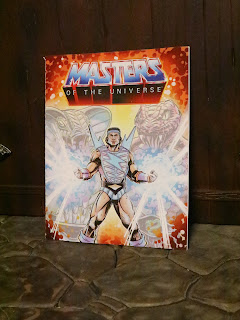 *  This comic is titled "Rise of the Snakemen!" but, as you can see, there is no title on the cover. This is actually the international version of the figure, so the comic has no words inside nor is there any unique text on the back. The art is cool and if you do read the story it is kind of neat. Snake Armor He-Man has been poisoned by King Hiss and Bolt-Man has to heal him. Together they fight off Kobra Khan and Rattlor. Hijinks ensue. 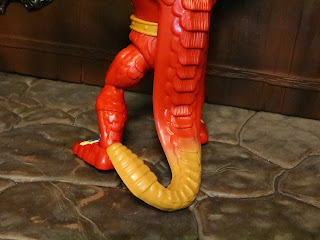 The Negatives:
* My only complaint about Rattlor is that, like the vintage toy, his tail really interferes with getting him in a solid standing pose unless you position him just right. It's a little frustrating and is a part of the figure I would have liked to have seen updated. 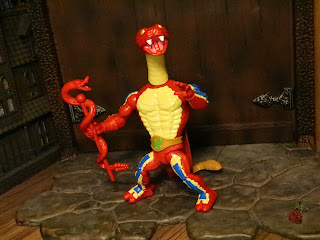