Action Figure Review: Tri-Klops ("The Terror of Tri-Klops") from Masters of the Universe Origins by Mattel 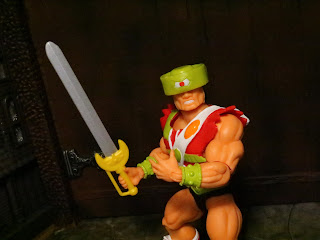 The marathon of Masters of the Universe Origins reviews rolls on into December and today we're beginning to look at a few exclusive figures that have been released. For today's installment I'm checking out the Mattel Creations exclusive Tri-Klops based on his appearance in the vintage minicomic "The Terror of Tri-Klops!" In 2020 Mattel held a fan vote, offering up four characters fans could choose from to appear in MOTU origins. The other choices were Anti-Eternia Man-At-Arms, Masters of the Multiverse Keldor, and Wun-Dar, but this minicomic version of Tri-Klops beat them all out. This version of Tri-Klops was often requested in Masters of the Universe Classics (AKA the greatest toyline of all time) but he was never included there so for fans of the minicomic looks of the characters this is a pretty big deal. Tri-Klops went up for sale on September 13th alongside the Power-Con exclusives and Sun-Man. That was an expensive Monday, I can tell you that! While Tri-Klops was my third choice from the figures offered, I'm still glad to get him as he does offer up a neat variant for a character who hasn't had many different looks over the years. Let's check out Tri-Klops from "The Terror of Tri-Klops!" after the break.... 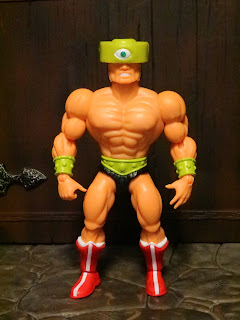 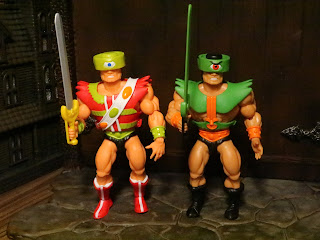 Comparison:
* Here's a quick comparison shot of the minicomic Tri-Klops (left) and the standard Origins Tri-Klops (right) from earlier this year. What's different? The armor, the boots, the skin tones, and the paint colors. I don't like the minicomic design as much as the classic design but Mattel definitely did more than just repaint the figure in lighter colors for sure. 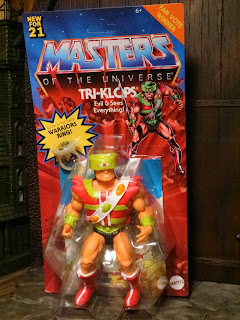 The Packaging:
* I didn't take a picture of the cardboard "mailer" box Tri-Klops comes in but it features some nice black and white artwork on it. Inside Tri-Klops comes on a fantastic traditional blister card that should fit in well with the rest of your MOTU origins collection. I like the art of Tri-Klops on top of the card and on the back, too. 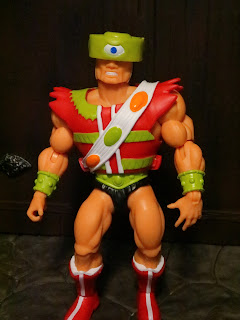 The Positives:
* Tri-Klops features a lighter green with magenta color scheme that really makes him stand out. He's very bright, more so than I would have expected. His armor is completely new here plus he's wearing different boots, so he's rather different than the basic Tri-Klops. Tri-Klops has a bandolier across his armor that has little ovals on it. I'm not sure what they're supposed to be but the bandolier itself is part of the armor and not a separate piece. It's interesting that Mattel went with a lighter skin color. I wonder if they thought that matched the art better or if it was just the way the plastic came out? 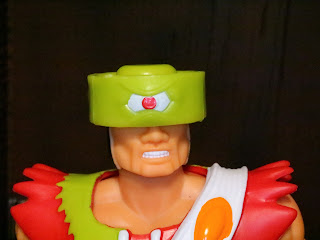 * The portrait is reused, which isn't a problem. Tri-Klops has a pretty good headsculpt although you can't see his entire face as his eyes and forehead are hidden under his visor. His mouth looks pretty good, though. He looks like he's in the middle of battle or perhaps like he just saw something he doesn't like. It's kind of a cringe, I guess. The visor has three different eyes on it with the appropriate "eyebrows" at the top. 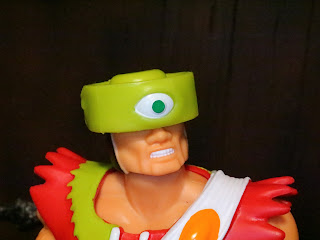 * Tri-Klops' visor rotates revealing his three different eyes each with their own powers. There aren't sculpted eyes (or eye sockets) underneath the visor like on the Masters of the Universe Classics Tri-Klops but I didn't really expect there to be. It works just fine and is still plenty of fun to play with. 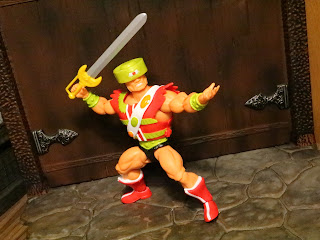 *  The MOTU Origins figures are built like the vintage toys but with modern articulation. While their bulky frames make the articulation a bit clumsy, they do feel like an evolution of the vintage line. Imagine what you would get if you mixed a vintage figure with a MOTUC figure. They're quite fun to play with.
* They're also modular and can be easily separated to make your own lazy boy customs! 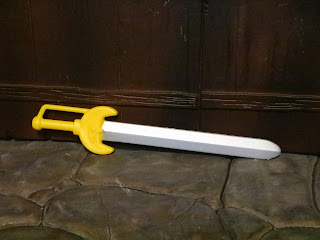 * Tri-Klops has his classic sword but this time it's been painted with a yellow hilt and a silver blade. I love the look of this weapon and I really wish more of the accessories in the line included a bit of paint deco. It's amazing what one bit of metallic paint can do for a weapon. 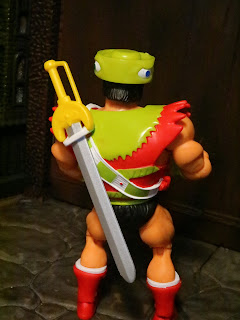 * This version of Tri-Klops also has a slot on his armor to stow his sword. It looks like it hangs from the bandolier. It's simple but effective. 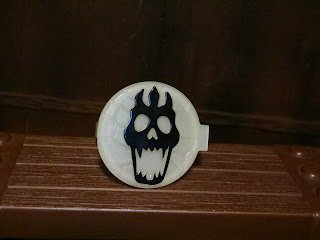 * A really cool little extra included with this figure is the Warrior's Ring. The vintage Tri-Klops (and Trap Jaw) also included this mysterious ring that looks like it has an image of the Spirit of Grayskull on it. It glows in the dark, too! This is actually reused from Masters of the Universe Classics (where it also came with Tri-Klops) but it's a neat extra. 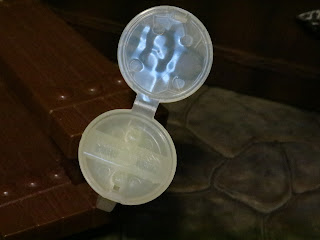 * The ring opens us and you can see the Masters of the Universe Classics logo on the bottom. 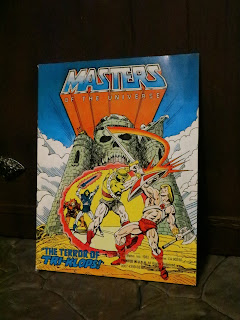 * While the rest of the Origins figures come with short minicomics, Tri-Klops actually comes with a complete reprint of "The Terror of Tri-Klops!" That's a pretty nice inclusion. 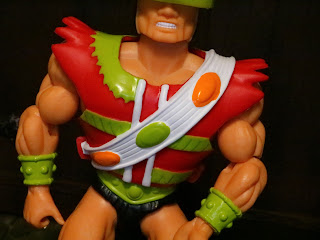 The Negatives:
* My only complaint is that some of the paint on Tri-Klops' armor, particularly on his bandolier, looks fairly messy. The little Easter eggs on his bandolier look really sloppy, don't they? 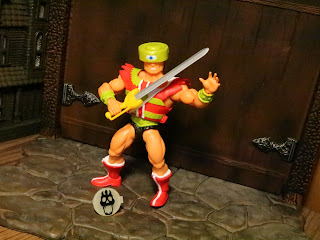 Listen, this isn't my favorite version of Tri-Klops or anything (I even voted for Keldor and Wun-Dar in the vote) but Mattel did a pretty nice job with this figure. He wasn't much more than a standard figure and he comes with the cool Warrior's Ring and a full-sized minicomic. This guy could have been a simple repaint but Mattel did put some effort in to this Tri-Klops variant and he turned out great. He's a Great and a 1/2 figure in this line and just a really fun variant of the character. There have been quite a few MOTU Origins exclusives and a pretty exciting one is coming tomorrow....