Action Figure Review: Clawful from Masters of the Universe Origins by Mattel 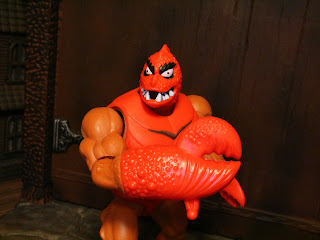 Grab your Old Bay and some drawn butter; today we're taking a look at Clawful! Clawful is known as the warrior with the grip of evil and he's one of the 1984 additions to the Evil Warriors. I'm pretty sure I got Clawful for Christmas as a kid, maybe in 1986 or 1987, and while he wasn't one of my absolute favorites as a kid I always did like his oversized claw. This guy looks like he's ready to throw down with Fisto and Jitsu with that massive right claw. Clawful is part of the newest series of Masters of the Universe Origins figures and he's another figure that I really think is an improvement over the vintage toy. Let's check out this take on Clawful after the break and see if he packs some serious pinch... 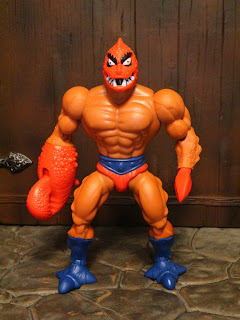 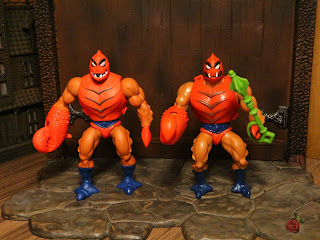 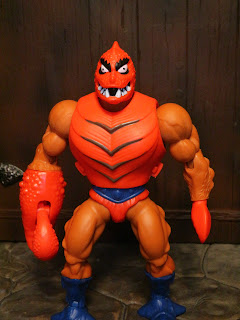 The Positives:
* Clawful is kind of weird because he looks like a luchadore in a crab costume rather than an actual crab person (his race is called the Karikoni). That's due to his exposed, more human looking arms and legs and having a regular torso. With the armor from Origins (which is much sturdier and looks better) he looks more crab-like, though, and the darker skin tone matches the reds of his claws, torso, and head. The more pronounced ridges and such on his body also look better here and give him a more inhuman appearance. 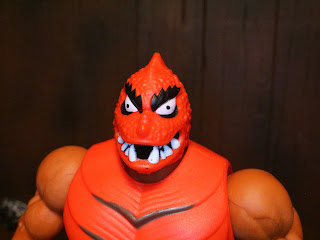 * Clawful has always kind of looked like a Muppet thanks to his massive, goofy eyebrows, but Mattel did make his mouth look a bit more fearsome here. He has way more teeth than the vintage toy and they look sharper and more frightening. His head is also much more detailed. He looks pretty good. Still kind of goofy, but in a good way. Clawful definitely has never been depicted as the sharpest knife in the drawer. 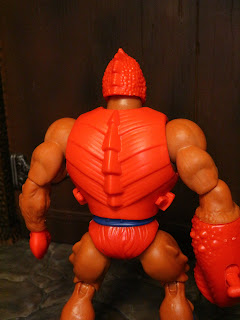 *The back of Clawful's armor (or is this actually his shell) has a really neat ridged pattern on it, just like the vintage toy. 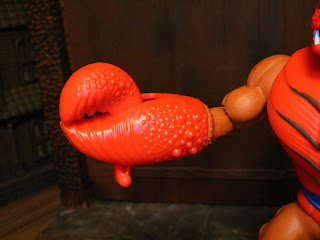 * Clawful seems to be a fiddler crab since he has one claw much larger than the other. Not only is it super cool just running around with one claw larger than the other but this one has some real pinching power. Move the little tab on the bottom and you can open the claw. There's a little mechanism inside so that it snaps shut on its own. For safety, get some little rubber bands to put around it like the lobsters wore that grocery stores used to sell. Remember going to the grocery store and watching those guys hanging out in the tanks? 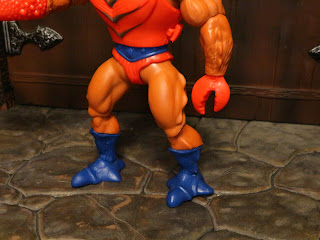 * Like Buzz-Off, Clawful benefits from the more detailed limbs and more monstrous hands and feet. They definitely make him more exciting than most figures with the same limbs and boots and such. 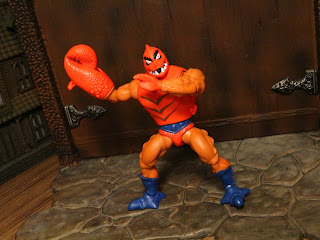 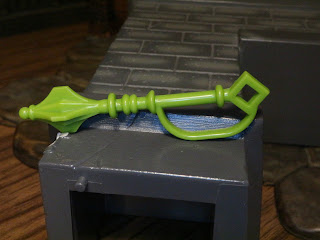 * Clawful comes sporting his club which looks much like the classic accessory. The loop is larger but he can also hold the handle with his smaller claw as well. 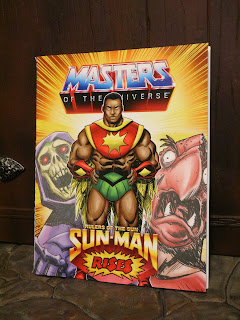 * I'm never going to turn down a minicomic and I love that Mattel brought them back for Origins. This one looks cool as it introduces Sun-Man into Masters of the Universe but what the heck is going on with Clawful on the cover? He looks like a bird or something! There's just way too much going on in this issue for 6 pages, as well. Anti-Eternia He-Man shows up to beat down Skeletor and Clawful and then Sun-Man shows up to defeat him. There are Horde Troops randomly running around, too, and He-Man and Sun-Man never even exchange dialogue. Sun-Man deserves better! 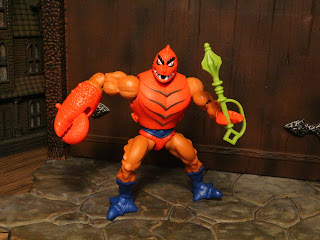 Clawful is definitely an Epic Masters of the Universe Origins figure. He's fantastic. Great sculpt, improved headsculpt over the vintage toy, a functioning claw; what else could Clawful have that you'd want? I like Masters of the Universe Origins more and more with each release and this series definitely has me pumped up. I don't have Sun-Man or the Horde Trooper yet but when I get them you can be sure that I'll review them right away. Will either of them overtake Clawful for the title of the best figure in series 8? We'll have to wait and see. Just know that I have my best people out there looking for the rest of series 8 as we speak.
Are you a fan of Clawful? Then get a big side of melted butter and check out my reviews of the M.U.S.C.L.E. Clawful from Series 3, Pack A , the Funko POP! Clawful #1018, and the MOTUC Heads of Eternia pack that features a Clawful head.
For more Masters of the Universe Origins reviews check out the following:
Anti-Eternia He-Man
Battle Armor He-Man
Battle Armor Skeletor
Battle Cat
Battlefield Warriors
Beast Man
Beast Man (Lords of Power)
Buzz-Off
"Buzz Saw" Hordak
Castle Grayskull
Clamp Champ
Eternian Goddess
The Evil Horde
Evil-Lyn
Evil-Lyn (200x)
Faker
Fisto
Flying Fists He-Man
He-Man
He-Man and Prince Adam 2-Pack
Hordak
Jitsu
Land Shark
Lords of Power
Man-At-Arms
Man-E-Faces
Maniacal Mimics
Mer-Man
Mer-Man (Lords of Power)
Mosquitor
Mysteries of Grayskull
Ninjor
Orko
Panthor
Panthor (Flocked)
Prince Adam & Sky Sled
Ram Man
Rise of Evil
Roboto
Scare Glow
She-Ra
She-Ra (PowerCon Exclusive)
Skeletor
Sorceress
Stinkor
Stratos
Stratos (Minicomic)
Teela
Trap Jaw
Tri-Klops
Tri-Klops ("The Terror of Tri-Klops!")
Webstor
Wind Raider
Zodac
Posted by Barbecue17 at 3/31/2022