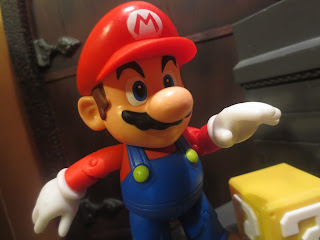 I've recently acquired a number of figures from series 2-3 and series 2-4 of Jakks Pacific's World of Nintendo. These all came out near the end of 2016 but they're just starting to hit the saturation point where they can be more easily found. Between the 10 figures from 2-3 and 2-4 there have only been three all new sculpts (Inkling Boy, Villager, and Peppy) compared to 6 repaints. And then, there's Mario here. Mario was originally released back in late 2014 and while variations of the main man of gaming have been prevalent in the line, if you wanted a straight up Mario you might have to look around a bit. It seems that Jakks definitely wanted to get Mario back on shelves and they took an interesting route: This Mario not only features a new accessory but also a new headsculpt and new hands. He's more of a retool or a true "version 2" than a repaint. I considered skipping him, but the newly sculpted parts, the cool new accessory, finding him for retail price won me over. What can I say? I'm a sucker for this line! Let's check out the series 2-4 version of Mario after the break... 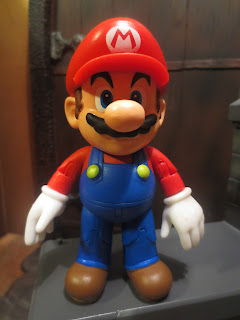 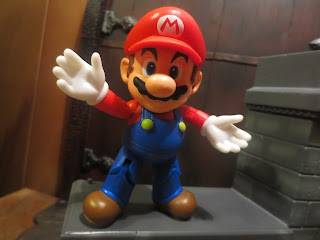 * While S.H. Figuarts has put out some extremely well articulated Mario figures in the higher-end market, Jakks' offerings are definitely geared for mass market retail. Considering that, I still really do like how sturdy these figures are. They're definitely made for play and they have a nice amount of joints for achieving some fairly basic poses. 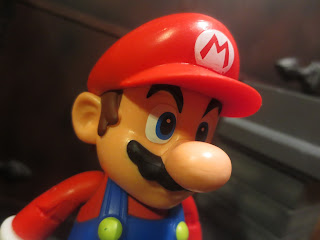 * One of the changes made to this figure is a different headsculpt. While the series 1-1 Mario has a happier, open-mouthed expression, this Mario is a bit more basic. His mouth is closed and his eyes are a bit more focused. Considering that Mario is the main man, having a different expression for the guy that shows off a more determined look isn't at all a bad thing. As always, I think Jakks does a stellar job of capturing the charming and cartoonish appearance of Nintendo's characters. 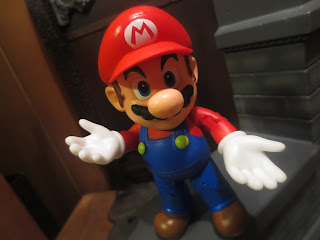 * The second change from the series 1-1 Mario figure is that this Mario has open hands. You know what? I really like these. I think the way they make Mario look like he's gesturing really add to the overall appearance of the figure. The series 1-1 fists still work too, but these just seem pretty interesting. 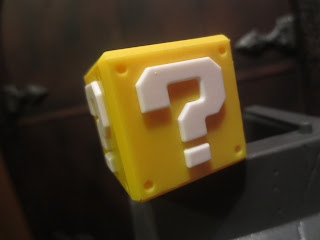 * Last, and certainly not least, is Mario's cool new accessory: A question block! While the earlier figures came with cardboard question blocks with mystery accessories sealed inside, this is a fully sculpted accessory. The "?" is actually a relief on four sides of the block. It looks great. A clear plastic stand to give it the illusion of floating would have been a neat idea, too, but this still very much works as an accessory. 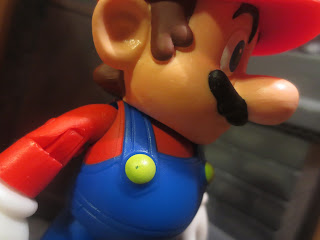 * There's still a bit of sloppy paintwork on this guy, most noticeably on the yellow buttons for his overalls. The button isn't fully painted and what's there actually looks kind of green. Weird. 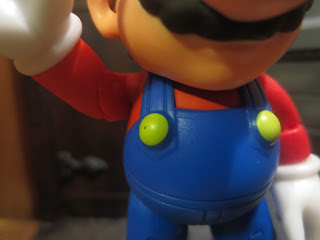 * I really would have liked to have seen a balljointed head here. I really think the intention is that this head is ball jointed (I can't determine) and the problem is that it just sits too low on the neck. Releasing this guy would have been an optimal time to redo this mold, but sadly it remains unchanged. 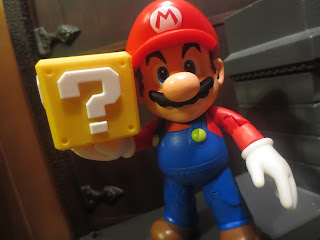 Jakks' World of Nintendo line certainly relies on variants and repaints to keep trucking along. Fortunately, they're usually pretty good and represent a different costume or characetr. Mario here is the first true "version 2" figure in this line, so I'm looking at him a bit differently. If you already have the basic Mario, you really have to decide how much the new details here are worth. I would have loved to have seen a red overalls and blue shirt combo here to shake things up. Mario is still a Good figure, but he's definitely more for the latecomers to the line rather than the folks who have been here since the beginning.

I've now reviewed quite a few Mario figures (something I never thought I'd be able to say) including the standard Mario, the classic Fire Mario, the indestructible Gold Mario, the water-hating Cat Mario, and the magical Tanooki Mario. I've reviewed plenty of other heroes and villains in this line, including: