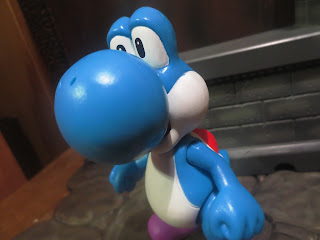 Today I'm looking at Blue Yoshi, one of the repaints in series 2-4 of Jakks Pacific's World of Nintendo line. Series 2-4 features quite a few redone characters including another Samus repaint (Phazon Suit) and redone versions of the basic Mario and Wind Waker Link (the only "new" figure is the Inkling Boy from Splatoon). I'm hoping that we see some more interesting releases at Toy Fair 2017 this coming weekend but, for now, I'll talk about the most interesting figure in this series for me: Blue Yoshi. The Mario figures are definitely my favorites and now I'm finally reaching a point where I want to own every different color of Yoshi. Considering the seemingly limited distribution of this line, I know Jakks has gotta make some money back and I'd much rather have an army of colorful Yoshi's than other repaints. Jakks is calling this guy Blue Yoshi, but, to be honest, he's actually not. He's Light Blue Yoshi. They are two separate characters and, considering Jakks made a legit Blue Yoshi in the 2.5 inch line, this was an odd mistake to make. Still, this guy's a good figure and clearly Light Blue Yoshi (he has the purple shoes), so let's take a closer look at him after the break... 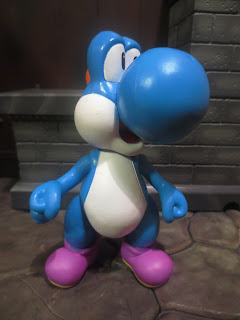 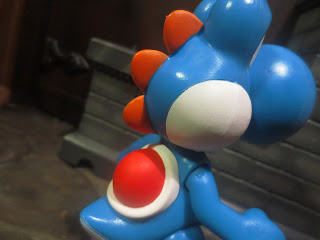 Note: Considering this guy's a repaint, check out my review of the original Yoshi for a full review. I'm mostly talking about paint and colors here.

* I love the subtle differences on these little guys, and (Light) Blue Yoshi has orange fins running down his back. Overall, he's a very neat and clean figure with an appealingly bright color scheme. 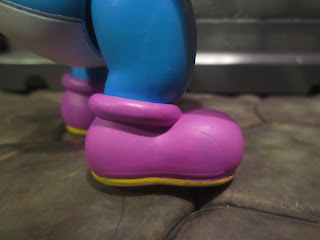 * The purple shoes are another detail that absolutely proves this is indeed intended to be Light Blue Yoshi. They look very...purple. Grape even. I also like the mustard yellow used for the sole of the shoes. 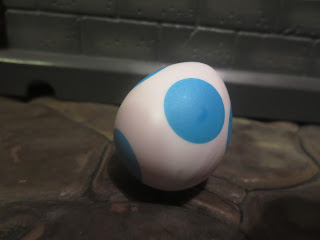 * Yoshi comes with an egg, the same accessory as the previous three Yoshi figures. The only difference here is that this egg has light blue spots instead of green, pink, or red ones. The egg isn't a terrible accessory but it does have a hard time standing up on it's own. My kid finds these incredibly fascinating, though, so Jakks is doing something right here. 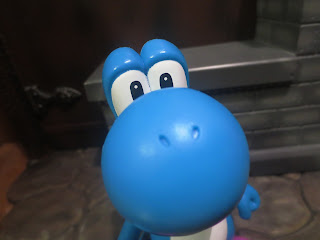 * I still think Yoshi's nose is oversized. Since this is the same sculpt as all of the previous Yoshi's this isn't anything new; it's just something that I'm reminded of whenever I try to photograph Yoshi and find his eyes obscured by his enormous bulbous nose. 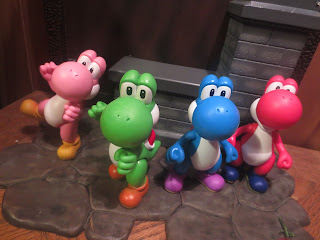 While Yoshi is by no means an impressive action figure he's still a fun toy that looks good on display, particularly along with the other Yoshis or with other World of Nintendo figures. He's a Good figure. While there's nothing really new to see here, I do have to admit that I'm enjoying building a small army of Yoshis. What color do you think we'll see next?

I have reviewed a few other Yoshis: The classic green Yoshi, Red Yoshi, and Pink Yoshi. For other World of Nintendo figures, check out the following reviews: